Is it just us or are we all counting down to Feb. 9, 2018, which is when "Fifty Shades Freed" debuts in theaters? The scintillating third installment of author E.L. James' story about Anastasia Steele and Christian Grey's romance promises to be just as steamy and dramatic as the first two. In honor of the film's release, Wonderwall.com wanted to take our obsession one step further by investigating some fun facts about one of its stars, Dakota Johnson… Keep reading for more…

Antonio Banderas was her stepdad

In 1996, Dakota Johnson's mom, Melanie Griffith, and dad, Don Johnson, divorced. That same year, Melanie married one of Hollywood's leading men, Spanish actor Antonio Banderas, making him Dakota's stepdad. Though Melanie and Antonio split up in 2014, Dakota is reportedly still close to the man who helped raise her.

Her middle name is unusual

Dakota Johnson's middle name is Mayi, an uncommon name that's believed to be of French origin. While we're not sure what the name means, it's kind of mysterious and beautiful, like Dakota.

Dakota Johnson was born in Austin, Texas, and raised in Aspen, Colorado. Dakota (seen here in 2003) indulged her love of acting from an early age, participating in numerous community and school plays.

Anastasia's a brunette, but Dakota's not

Dakota Johnson is currently a brunette and sports brown hair to play Anastasia Steele. But her hairstylist, Tracey Cunningham, told Refinery29 in 2017 that Dakota "is naturally a dark blonde" — just like her mama!

Her parents aren't her only famous relatives

Dakota Johnson's maternal grandmother is none other than former model and '60s film star Tippi Hedren (seen here with Dakota in 2005). Tippi refused to continue working with filmmaker Alfred Hitchcock after making "The Birds" and "Marnie" with him because he harassed and, she claims, sexually assaulted her. Today, Dakota credits her grandma with teaching her how to stand her ground with Hollywood executives who might try to exploit or otherwise mistreat her.

Just like grandmother Tippi Hedren, Dakota Johnson is a passionate animal rights activist. Her love of animals goes so deep — she's gone on record saying she'd trade her fame to live a quiet life on a ranch in Colorado surrounded by "chickens and horses." Dakota's seen here in 2017 taking her beloved dog, Zeppelin, for a walk.

Dakota Johnson (seen here mid-dip with Cara Delevingne) is also an accomplished dancer. She studied ballet for 12 years and even appeared in an Aspen, Colorado, production of "The Nutcracker" as a child.

She's got loads of siblings

Six — that's the number of brothers and sisters Dakota Johnson has. Along with half-brother and fellow actor Jesse Johnson (seen here with Dakota in 2015), she's also got a brother and sister on her mom's side and a sister and two more brothers on her dad's side, all of whom are technically half-siblings, but siblings all the same!

Her friendships aren't what you'd expect

Growing up as the child of celebrities means you tend to run in circles with other children from famous families. But according to Dakota Johnson, she wasn't really friends with a ton of other celeb kids growing up (though she has been known to pal around with Mary-Kate Olsen, seen here). As for other famous celebrity spawn, Dakota once told Interview magazine, "I have one friend who I'm very close with, my friend Riley Keough, whose mother is Lisa Marie Presley. But other than that, I don't have very many pals who are… I don't know. I kind of stayed away from it all."

She made her big-screen debut at 9

In 1999, Dakota Johnson starred alongside mom Melanie Griffith and stepdad Antonio Banderas in the crime dramedy "Crazy in Alabama." Dakota (seen here that same year) played her mom's character's daughter, Sondra. Although she enjoyed acting, Dakota decided to first pursue a modeling career not long after making her first film.

She's been to rehab

When Dakota Johnson was just 17 years old, she reportedly checked herself into a 30-day rehab program to help her kick her dependency on drugs and alcohol.

After sobering up, Dakota Johnson returned to the world of acting with her first film in more than a decade, 2010's "The Social Network." In the movie, Dakota plays Amelia Ritter, Sean Parker's (played by Justin Timberlake) college friend with benefits.

She shares an honor with her mom

In 2006, Dakota Johnson was named Miss Golden Globe by none other than her mom, Melanie Griffith. Interestingly, Melanie held the same title in 1975. The honor is typically bestowed upon a daughter (and, occasionally, a son) of a Hollywood celebrity. In 2017, the title of Miss Golden Globe was officially put to rest when Dwayne Johnson's daughter, Simone Garcia Johnson, was named the Hollywood Foreign Press Association's Golden Globe Ambassador, a title that is more gender neutral and inclusive.

English actor Charlie Hunnam was supposed to play Christian Grey opposite Dakota Johnson in "Fifty Shades of Grey." But just a few months after the "Sons of Anarchy" star was officially cast in the role, he bowed out, blaming scheduling conflicts — not the intense sex scenes, as many suspected — leaving casting agents scurrying to find his replacement. With little time to go before cameras rolled, they quickly settled on Northern Irish actor Jamie Dornan for the part of Christian Grey. Now we can't imagine Dakota starring alongside anyone but Jamie in the trilogy.

In the fall of 2017, headlines revealed that Dakota Johnson — who's previously dated actor Jordan Masterson and model-musician Matthew Hitt — had been spotted out with Coldplay frontman Chris Martin (also known as Gwyneth Paltrow's ex-husband), who's 12 years her senior. The new couple were then spotted together in Israel, Argentina, France and California. Dakota's dad, Don Johnson, confirmed the romance, telling The Sun, "He's a lovely guy. I've met him and you want your kids happy, no matter what shape it takes." Chris' ex-wife also approves. "Gwyneth is happy if Chris is happy. She only wants the best for him," a source told Us Weekly of the rocker's romance with Dakota.

There's a reason Dakota Johnson did so well as a model during her teen years — she's all legs! The stunning actress stands at an impressive 5 foot 7. While that's not necessarily "tall" by supermodel standards, Dakota's definitely not a diminutive actress.

While you might catch Dakota Johnson out and about in Los Angeles or New York looking at her phone, she's not looking at Facebook. Not long after filming 2010's "The Social Network," which tells the story of how Mark Zuckerberg founded the world-dominating social media platform, Dakota shared that she quit Facebook after realizing she was behaving "like a psycho-stalker" on the site (aren't we all, Dakota?). She also rarely uses Instagram (and has a reputation for deleting pictures shortly after posting). She doesn't even have a Twitter account. Going to the bathroom must be so boring for her.

Dakota Johnson's Oct. 4 birthday means she belongs to the astrological sign of Libra. Libras are known to be hard-working and intensely motivated, but they also love looking fierce while they're succeeding. One of the cornerstones of being a Libra is wearing your heart on your sleeve. They're quick to fall in love and unafraid to show their emotions — but they're also said to brood and rarely forgive someone who's done them wrong.

Dakota Johnson's gone on the record numerous times to say that the explicit sex scenes in the "Fifty Shades of Grey" trilogy don't bother her one bit. To Dakota, they're merely "tasks." Although Dakota's also said she "has no shame," which presumably makes the steamy scenes easier to create, she did mention not wanting her famous family to watch the films. As of 2017, she'd reported that her mom, Melanie Griffith, and dad, Don Johnson, still hadn't seen the movies.

As far back as 2012, Kristen Stewart was touted as a top contender for the role of Anastasia Steele in "Fifty Shades of Grey," though it's unlikely she would have taken the job considering that E.L. James' first book started as "Twilight" fan fiction. According to The Hollywood Reporter, Shailene Woodley was an early favorite for the part a far as the author was concerned. Lucy Hale confessed she had a "very, very sexual" audition for Anastasia. And Emilia Clarke revealed that she turned the role down because she didn't want to get pigeonholed as an actress who always gets naked since she'd already made headlines for her nude scenes on "Game of Thrones." But in late 2013, news broke that Dakota Johnson, still a relative unknown acting-wise at the time, had been cast.

She has several tattoos

Dakota Johnson reportedly has six tattoos (and possibly more). Her unique ink includes a wilting flower on her forearm with nearby lettering, a small icon behind her right ear, the words "Look at the moon" surrounded by tiny stars on her right foot, three birds on her right shoulder (seen here), "AMOR" in block letters on the back of her neck and, on her inner left bicep, the Latin phrase "Acta Non Verba," which means "Deeds not words" (and is the motto of the Merchant Marines). For the "Fifty Shades" trilogy, makeup artists had to cover up Dakota's tattoos.

She was (almost) a major TV star

In 2012, Dakota Johnson was cast in the TV comedy "Ben and Kate" as Kate Fox, a single mom whose brother Ben (played by Nat Faxon) moves in to help care for her daughter (played by Maggie Elizabeth Jones). The series ran for 16 episodes before it was ultimately cancelled. It's hard to imagine Dakota as a sitcom star now that we've seen her talent on the big screen.

While we're all salivating in anticipation of "Fifty Shades Freed" arriving in theaters on Feb. 9, 2018, Dakota Johnson has four other films on the books that look to be equally as intriguing. Although none of the movies have posted release dates, they're all projected to hit theaters in 2018. The films include the adventure "The Peanut Butter Falcon" co-starring Shia LaBeouf, the horror mystery "Suspiria" co-starring Chloe Grace Moretz, the thriller "Bad Times at the El Royale" co-starring Chris Hemsworth, and the musical drama "Sound of Metal" co-starring hunky Belgian actor Matthias Schoenaerts. 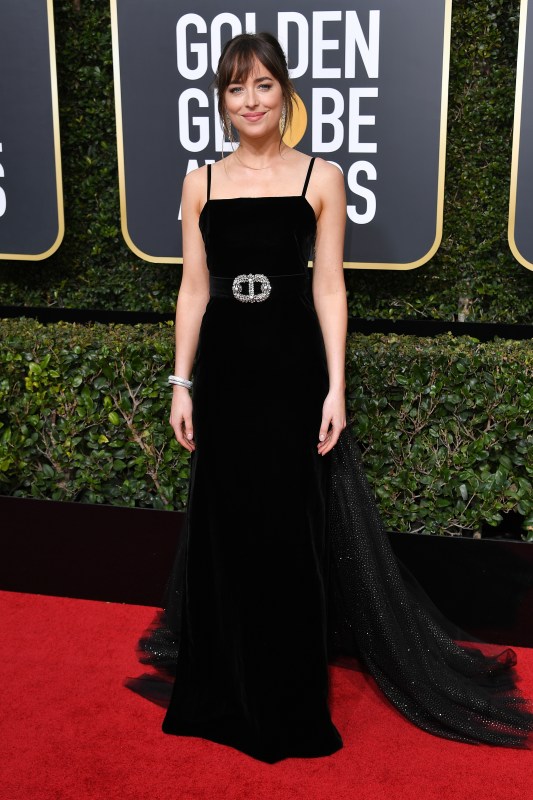 Up Next Dakota decoded