"Fifty Shades Darker" hits theaters on Feb. 10, 2017, and we can hardly wait! In anticipation of the first sequel to "Fifty Shades of Grey," Wonderwall.com is taking a look at the actress behind Anastasia Steele, Dakota Johnson. Keep reading to see what you might not already know about Dakota — but should!

RELATED: Get to know the cast of "Fifty Shades Darker"

1. She started acting at a young age

As the daughter of Melanie Griffith and Don Johnson, Dakota Johnson grew up in the acting world. At the age of 10, Dakota starred in "Crazy in Alabama" with Melanie. It was a true family film, because Dakota's stepfather, Antonio Banderas, was the director.

2. She bombed her Juilliard audition

Dakota Johnson did not get into her dream school: Despite her talent and acting pedigree, she did not make the cut at Juilliard. They said, "'We'll ask four out of 150 of you to sing.' I thought, 'God, that sucks for those guys.' I went in so nervous and my comedic monologue was one that Steve Martin wrote," she explained to AnOther mag in September 2015. "They didn't think it was funny. At all. And then, of course, they asked me to sing. So I just sang the song in my head, which was 'Nude' by Radiohead, because 'In Rainbows' had just come out. It was so awkward. I was just wailing and they stopped me and said, 'Thanks for coming.'"

RELATED: Celebs who enrolled in college after they were famous

At 17, Dakota Johnson reportedly checked into a 30-day treatment program at a Malibu rehab center for drug and alcohol addiction.

Colorado will always remind Dakota Johnson of home! Though she grew up in Los Angeles, she also spent a lot of time at dad Don Johnson's house in Aspen. "I think about my dwindling anonymity," she told Vogue in February 2015. "And that's really scary because a very large part of me would be perfectly happy living on a ranch in Colorado and having babies and chickens and horses — which I will do anyway."

Dakota Johnson split with boyfriend Matthew Hitt in June 2016 after two years of dating. In February 2016, she opened up about her love life to The Telegraph. "I've only been in long-term relationships," she admitted. She also spoke about her best and worst date stories. "I went skydiving once with one of my ex-boyfriends and that was fun. I thought it was an interesting choice because he could have killed me when I jumped out of a plane with him. The worst one was when I got broken up with once when I was wearing a Halloween costume and was dressed as Steve Jobs."

Dakota Johnson is best friends with another famous celebrity spawn, but she doesn't have a lot of friends whose folks are well-known. Asked by Interview magazine if it's not really a big deal to have famous parents, Dakota responded, "I have one friend who I'm very close with, my friend Riley Keough, whose mother is Lisa Marie Presley. But other than that, I don't have very many pals who are… I don't know. I kind of stayed away from it all."

Dakota Johnson has a lot of tattoos. To name just a few, she has birds tattooed on her right shoulder, "amor" on the back of her neck, "Acta Non Verba" on the inside of her arm and "Look at the moon" on her right foot. All of her tattoos were covered up for her role as Anastasia Steele in the "Fifty Shades" franchise. "I went through a phase where I loved tattoos, and I loved the feeling of getting tattooed," Dakota told Net-A-Porter's The Edit in January 2016. "But now I've outgrown them mostly, and [because] I always have to cover them for jobs, God, they're annoying!"

8. She has an adorable dog

Dakota Johnson has a rescue dog named Zeppelin. In a February 2015 interview with The Telegraph, Dakota referred to her pup as her "main man."

9. She likes to be alone

Dakota Johnson does not thrive on the glitz and glam of Hollywood. She's happy when she's at home alone. "My life has changed dramatically. But there are times I feel lonely and then I just watch movies and read books and I'm happy I have the time to do those things," she told The Mirror in February 2016. "I cherish my solitude."

10. She was once Miss Golden Globe

Dakota Johnson was the first daughter of a former Miss Golden Globe, Melanie Griffith, to ever be selected for the honor too. At the Golden Globes ceremony on Jan. 16, 2006, they shared the stage together. 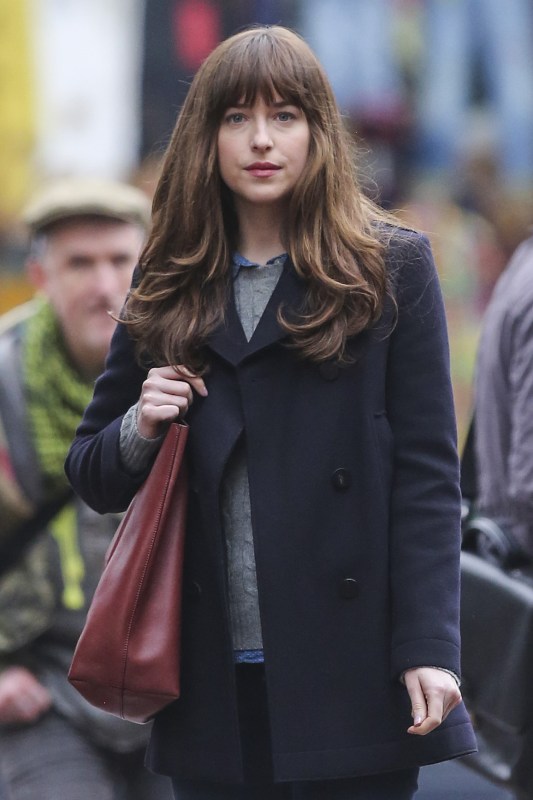 Up Next All about Dakota