Amy Schumer isn't just a comedy queen — she's also an author! In August 2016, the "Inside Amy Schumer" producer, writer and star released "The Girl With the Lower Back Tattoo" — a title spoofing the wildly successful "The Girl with the Dragon Tattoo" novels. Amy's collection of personal and observational essays — which publisher Simon & Schuster promises will "leave you nodding your head in recognition, laughing out loud, and sobbing uncontrollably — but only because it's over" — topped the New York Times' bestseller list upon its release. Keep reading for more comedic actresses who've authored books…

RELATED: The hottest stars of summer 2016

Just say yes to reading Amy Poehler's memoir! The "Saturday Night Live" and "Parks and Recreation" alum penned 2014's "Yes Please" and later explained its title: "The 'yes' comes from my improvisational days and the opportunities that come from youth, and the 'please' comes from the wisdom of knowing that agreeing to do something usually means you aren't doing it alone." Amy also discusses body image and parenting in the book in a way that makes her even more relatable.

"Girls" creator, writer, director and star Lena Dunham published her first book in 2014 — and it was a serious and shocking read. In "Not That Kind of Girl: A Young Woman Tells You What She's Learned," Lena opened up about being sexually assaulted at Oberlin College. She also stirred up controversy for writing about her curious interactions with her sister when they were children and for joking about being a "sexual predator." In a statement she gave to Time in November 2014, she said, "If the situations described in my book have been painful or triggering for people to read, I am sorry, as that was never my intention," she said. "I am also aware that the comic use of the term 'sexual predator' was insensitive, and I'm sorry for that as well."

Chelsea Handler is a comedian and a New York Times Bestseller List author. "My Horizontal Life: A Collection of One-Night Stands" and "Are You There Vodka? It's Me, Chelsea" are just a few of her books that have made the coveted list. Her most recent book, which is about her crazy travel adventures, is titled "Uganda Be Kidding Me." The book was No. 1 on the New York Times Bestseller List for two weeks in 2014, and she even did a stand-up show around it called "Uganda Be Kidding Me: Live."

Just call Tina Fey bossy! "Bossy Pants" is her page-turner of a memoir that was published in 2011. The "Saturday Night Live" and "30 Rock" alum writes about how her dream was to be a comedian on television. From her days as a young nerd to being a mother of two, every topic Tina touched on is comedy gold.

Why not, Mindy Kaling? The "Mindy Project" star published "Is Everyone Hanging Out Without Me? in 2012 and in 2015, she released another book, "Why Not Me?" Her first book included humorous observations on life, and her second recounted more of her own stories about her personal journey to find happiness in life. In 2015, she confirmed her next book will be a collaboration with ex-boyfriend and former "The Office" co-star B.J. Novak.

Kathy Griffin's autobiography "Official Boo Club Selection: A Memoir According to Kathy Griffin" was released in 2009. The funnywoman opened up about her life before and after she achieved fame and discussed everything from her plastic surgery disasters and her brother Kenny's struggle with drug addiction to her battle with bulimia and her use of speed. In true comedic fashion, Kathy's serious stories are filled with punchlines too.

A self-proclaimed geek, Olivia Munn published her book, "Suck It, Wonder Woman!: The Misadventures of a Hollywood Geek," in 2010. The actress' collection of essays touches on everything from her love of "Star Wars" to her love of banana cream pie.

Rachel Dratch is known for her days on "Saturday Night Live," but after her career hit a low point, the comedian published a book about it. In 2012, she released "Girl Walks into a Bar…: Comedy Calamities, Dating Disasters, and a Midlife Miracle," a book that also includes LOL-worthy behind-the-scenes stories from "SNL."

In 2010, Sarah Silverman released her comedic memoir, "The Bedwetter: Stories of Courage, Redemption and Pee." Not only does she bring up her family life, but she makes some candid confessions including that she smokes marijuana and was a bed-wetter until she was 16.

Bette Midler has starred in her fair share of comedies. She's also tapped her funnybone to pen a children's book, "The Sage of Baby Divine." Baby Divine is a red-headed little girl who wears heels in true Bette fashion. Divine's story also comes to life through Bette's rhyming skills.

Jenny Mollen published her latest book, "Live Fast Die Hot," in 2016 to share her hilarious tales of motherhood. The "Angel" actress is married to actor Jason Biggs, with whom she welcomed son Sid in 2014 — the same year she published her first book.

Talk-show host Ellen DeGeneres has three funny books with her name on them. As seen in this photo, her first book, "My Point… And I Do Have One," was published in 1995. In it, she shared her hilarious take on everything from bathrooms to elevators (and also gave us her secret recipe for Frenchy French Toast). She then published two more books that showed off her trademark wit: "The Funny Thing Is" in 2004, and "Seriously… I'm Kidding" in 2012.

"Golden Girl" Betty White has penned her fair share of books — seven and counting. "Here We Go Again: My Life in Television," which came out in 1995, looked back at her long TV career. "If You Ask Me (And Of Course You Won't)" gave us her funny take on love in 2011. Her most recent book, "Betty & Friends: My Life at the Zoo," was released the same year and focused on one of her favorite topics: animals. 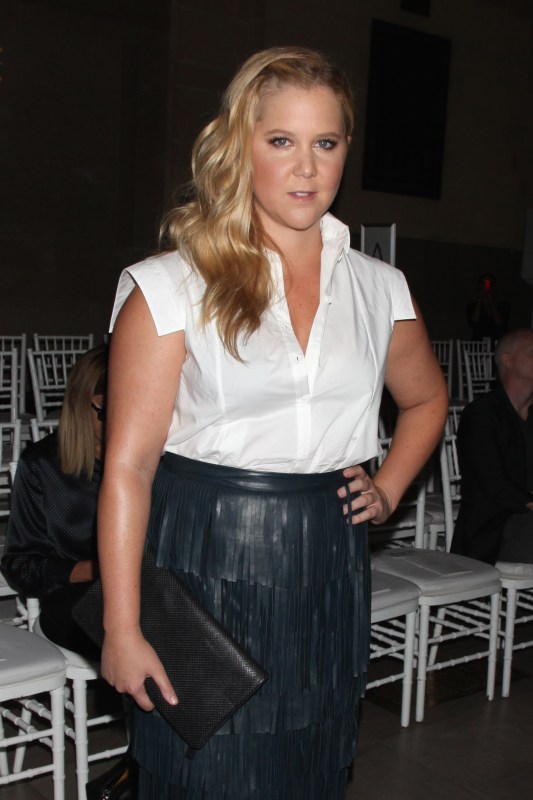 Up Next Amy's Story