Who doesn't have a thing for John Krasinski? While we loved him in "Something Borrowed," "The Hollars," and "The Office," John's taking on a new challenge: He's narrating Disney's "Born in China." John helps tell the stories of three animal families living in China's vast terrain. But before you catch the film in theaters on April 21, 2017, here are 12 reasons we love him so…

1. He collaborates with his wife

Not only do John Krasinski and Emily Blunt adore each other, but they also work together! The Hollywood power couple will co-star in their first feature film together in 2017. John will re-write and direct supernatural thriller "A Quiet Place" and star opposite Emily in the flick. Swoon.

Not only is John Krasinski attractive, but he's also incredibly smart — which is no small feat in Hollywood. The actor attended Brown University and graduated in 2001 with a B.A. in English literature.

3. He trains hard for his roles

John Krasinski takes his acting roles seriously. To get in shape to play Jack Da Silva in "13 Hours," he put in "a lot of work" in very little time, he told Stephen Colbert on "The Late Show" in January 2016. "Before training for the movie, I couldn't do one pull-up. I was like, 'How hard are these pull-ups, really?'" he confessed. His trainer soon had him doing "two-a-days, pulling sleds, pushing weights" after telling him, "You have to do 80 push-ups by tomorrow." The results speak for themselves, but instead of bragging about his hard-won new body, he joked about it, saying that wife Emily Blunt "would way prefer to have doughy guy back."

John Krasinski might have lost his "doughiness" while training for his role in "13 Hours," but "You're still sweet-faced," Stephen Colbert assured him. That he is: Between his soulful green eyes , that trademark smirk and his scruffy beard, there's a lot to love about John's looks.

5. He didn't think he was good enough for his wife

John Krasinski was just like every guy out there who's trying to get the girl. He had the same self-doubt, and it couldn't be more adorable to hear about it. In an interview with Conan O'Brien in 2012, John spoke about the first time he took now-wife Emily Blunt out. "[She was] incredibly intimidating," he said. "I was scared out of my mind to even go up and say 'hi' to her." But after she agreed to see him, he tried to sabotage things by taking her to a unique place for their first date. "[I thought,] I'm gonna really hit the gas and bring her to a gun range," John explained. "I think that I was so sure that I would never end up with her because she'd be like, 'This is ridiculous, I can have anyone, not you.' I was like, 'I'm going to blow it right away and then that way you don't feel bad.'" Clearly things went better than he expected: John and Emily married in 2010.

8. He stole our hearts as Jim Halpert

John Krasinski played Jim Halpert, the most lovable character ever, on NBC's "The Office." Even if you've never seen an episode, you'll melt after reading this line that he delivered in character while speaking about TV wife Pam (played by Jenna Fischer) during Season 6: "Four years ago, I was just a guy who had a crush on a girl who had a boyfriend. And I had to do the hardest thing that I've ever had to do, which was just to… wait. And a lot of people told me I was crazy to wait this long for a date with a girl that I work with but I think, even then I knew… I was waiting for my wife."

John Krasinski is so funny that he has annual prank wars with neighbor Jimmy Kimmel. In 2015, his Christmas prank on Jimmy included transforming the late-night host's office into a winter wonderland and hiding beneath a giant nutcracker costume. Jimmy got even by having his team create yard sale signs with John's face and supposedly, his real address. The signs were placed all around Los Angeles. But that wasn't it! Jimmy also made sure John was doused in eggnog during a visit to his show.

10. He got his start in the biz interning for Conan O'Brien

John Krasinski is an intern success story. He got his foot in the door working for Conan O'Brien as a script intern. Although his duties included office tasks, he also got to assist the writers. And not long after, he was being interviewed by Conan in front of the camera.

Through it all, John Krasinski has remained incredibly humble and appreciative of the life he's built. When Stephen Colbert told him during a January 2016 appearance on "The Late Show" that, "You have a great career… you've got Emily Blunt. Are you trying to make people resent you?"John responded simply, "No. Listen, I'm one of the luckiest guys in the world." 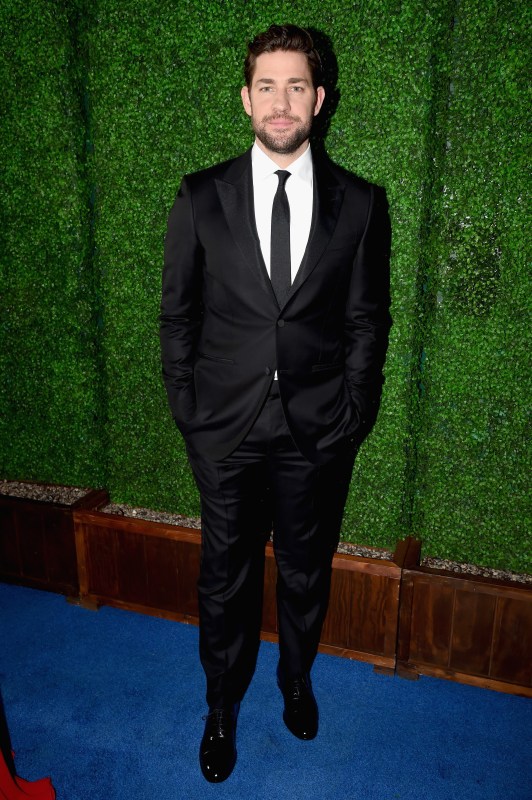