Leighton Meester will always be remembered most reverently for her tailor-made role as queen bee Blair Waldorf on "Gossip Girl." But the actress is returning to the TV spotlight again, this time as the female lead opposite Adam Pally on "Making History" — a time-traveling feminist-leaning comedy series that premieres on FOX on March 5, 2017. In the spirit of all things Leighton, Wonderwall.com rounded up the top 11 tidbits you might not know about her (but should!). Keep reading for more…

RELATED: "This Is Us" cast before they were famous

1. She had a rocky childhood

Leighton Meester's childhood didn't have a comfortable start. Her mother gave birth while serving a prison sentence in Texas for drug trafficking and her grandmother took care of her in Florida until her mom was able to join them. She told Cosmopolitan, "My mom lived through a lot before I was born, and I can't judge her on that."

We know, it's a pop culture fairytale come true: Two stars of beloved cult classics found true love. Adam Brody and Leighton Meester met on the set of "The Oranges" in 2011 (the same year "Gossip Girl" concluded — and five years after the final season of "The O.C." aired). The couple secretly wed in February 2014 and welcomed their first child, daughter Arlo Day Brody, in September 2015.

Leighton Meester is also a pretty awesome musician. The singer-songwriter went the indie route, developing a self-funded deal at Vagrant Records for her debut album "Heartstrings" in 2014. Her cover of "Dreams" by Fleetwood Mac really tugs at our heartstrings!

In an interview with Rogue Magazine in February 2017, cover star Leighton Meester dished about leaving her "Gossip Girl" days behind as she prepared for her new TV role on "Making History." "I think I'm different," Leighton explained. "I started "Gossip Girl" 10 years ago when I was 20, and I'm 30 now. I loved doing it, and now I'm doing something else that I love, and something new that's a little bit more my taste as a 30-year-old, something I've grown into."

5. She appeared on Broadway

Leighton Meester made her Broadway debut in 2014 in the stage adaptation of John Steinbeck's novel "Of Mice and Men" starring opposite James Franco and Chris O'Dowd.

6. She always wanted her name to be Deborah

Apparently, Leighton Meester is just too original a name for the actress's liking. She divulged on "Late Night With Seth Meyers," "I really love my character [in 'Making Histoy'] because her name is Deborah. I've always wanted my name to be Deborah. Or Linda or Barbara. And I wanted to have a pink suit and red curly hair." Well, Leighton, there's still time.

Although Leighton portrayed iconic brunette Blair Waldorf, she had to dye her naturally golden roots brown to audition for "Gossip Girl." She's seemed to settle on a light brown hair hue now, which gives her the best of both worlds.

In "Making History," Leighton plays Deborah Revere, a colonial woman who's Paul Revere's daughter. As such, the actress had to don a corset and, understandably, she's not a fan. "Wearing a real corset doesn't make you look thin! It just makes you look like you're going to pass out! If you're active, if you're outside on a hot day, and if you're in a corset, you can't even breathe. I would not recommend it to anyone. Ever," she told ELLE in February 2017.

9. She and Adam Brody bond over music

Even though Adam Brody is NOT his "The O.C." character Seth Cohen, we can't help but fantasize that he actually enjoys the same type of music as his cherished character. Leighton told Noisey that the couple did in fact bond over music, explaining, "I have some good stuff and we've inherited a lot from family and flea markets in New York. I used to live above this place in Chelsea/Meatpacking District that was a co-op store with everything under the sun and they always had good records there."

10. She's more of a Stevie Nicks than a Coco Chanel

While Leighton's very fashion-forward, her "off-duty" style is more refined California casual than uptown chic. She told Glamour of her look: "I prefer jeans and tees, jumpers, denim jacket, comfortable long skirt and sweater." Her style icons, she noted, are "Diane Keaton and Stevie Nicks."

Leighton Meester spent some time in Africa at a surf retreat learning how to ride waves, because she's cool like that! "Where I was, a little town called Robertsport, there was a surf retreat there that my brother-in-law opened and we were there for two weeks, pretty much all day," she told Refinery29. Hang 10, Leighton! 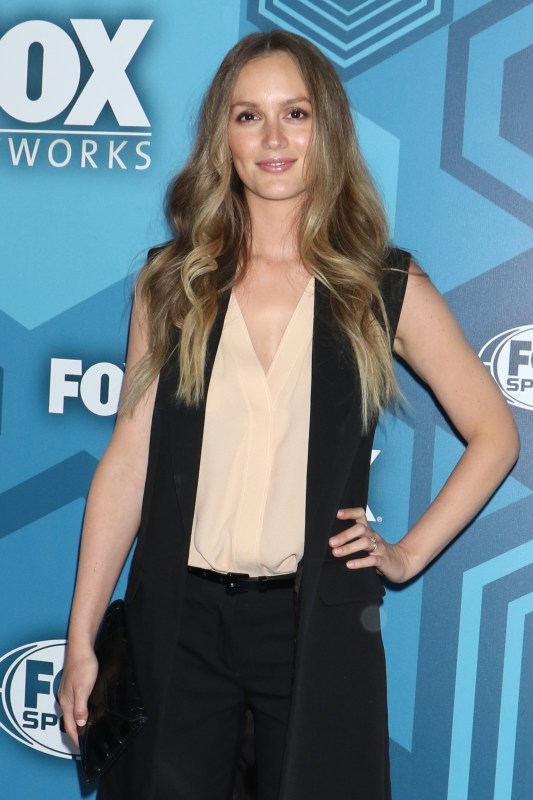 Up Next Did you know?