June Shannon, also known as Mama June, rose to fame in 2012 alongside her beauty pageant-winning daughter, Alana Thompson (aka Honey Boo Boo), on TLC's now-defunct reality show "Here Comes Honey Boo Boo." Through the years, we've witnessed many of Mama June's trials and triumphs, including allegations of child abuse and her recent astonishing weight loss. Take a walk with us down memory lane to learn about some of the most pivotal moments in this reality star's life.

Mama June came into the world on Aug. 10, 1979, in McIntyre, Georgia. Unfortunately, June was born with cataracts that were never properly treated, leaving her legally blind for the rest of her life. Not only did she have to face serious vision problems as a kid, but she was sadly raised in a broken home. When June was just 2 years old, her parents divorced, setting the stage for her own failed romantic relationships.

Mama June became a first-time mother to daughter Anna "Chickadee" Shannon (now Cardwell) at the incredibly young age of 15. In an interview with "Entertainment Tonight," June revealed that she lost her virginity at just 12 and was dating men between 10 and 20 years her senior. Before June gave birth to Anna, she asked her family if they would adopt the child, which they refused, though Anna later lived with her grandparents for a time. June went on to have daughter Jessica "Chubbs" Shannon in 1997 and daughter Lauryn "Pumpkin" Shannon (right) in 2000. And then came Honey Boo Boo (left)…

The love story between Mama June and her Sugar Bear (aka Mike Thompson) began in an online chatroom in 2004. June has said that shortly after chatting with Mike, she invited him over to meet in person. For Mike, it was love at first sight, but it took June a little while longer to feel Cupid's arrow. She said that once she saw how much he loved children, she knew he was the one for her.

In 2005 — just a year after meeting and falling in love with Sugar Bear — Mama June gave birth to daughter Alana, who would later be known to the world as Honey Boo Boo Child — the sassiest beauty pageant contestant in Georgia. In fact, it was Alana's bold personality that landed her on TLC's "Toddlers and Tiaras" in 2009, giving her family its first taste of reality TV fame.

In 2008, Mama June's life took a turn for the worse when she was arrested on theft and contempt of court charges related to a child support case concerning eldest daughter Anna in Hunt County, Georgia. In a since-deleted 2012 Facebook post, June claimed the charges were dismissed the same day. According to a report in the Daily Mail the same year, June was also arrested in 2004 for allegedly stealing $3,300 from a safe at the McDonald's where she worked and in 1998, she actually spent time in jail for cashing bad checks.

The joy of becoming a grandmother was quickly tempered when, in 2012, the Georgia Division of Family and Children Services made a surprise visit to Mama June's home. The caseworkers were concerned about a clip on "Toddlers and Tiaras" in which June gave daughter Alana a heavily caffeinated cocktail of Red Bull and Mountain Dew, which she called "go-go juice." There were also allegations that June fed her children roadkill to stretch her tight budget.

The enormous and unexpected popularity of Honey Boo Boo and Mama June on "Toddlers and Tiaras" led TLC to offer the family its own reality TV show, "Here Comes Honey Boo Boo." It made its debut on Aug. 8, 2012, just days before June's 33rd birthday. It went on to become TLC's highest rated show in the first season.

While filming an episode of "Here Comes Honey Boo Boo," Sugar Bear got down on one knee and proposed marriage to Mama June. A year after she enthusiastically accepted his ring, the pair vowed to remain together forever in a festive backyard commitment ceremony — think hunter orange and camouflage-print attire — in May 2013. While some speculate the pair actually married, it's been reported that they never did legally become husband and wife.

Amid cheating rumors and tabloid accusations of a troubled union, Mama June and Sugar Bear split up in September 2014 — just 16 months after their commitment ceremony. In a last-ditch effort to save their relationship, the pair appeared on "Marriage Boot Camp: Reality Stars" where Sugar Bear confessed that he indeed had been unfaithful with both men and women.

Mama June was skewered in the media when it was reported that she was romantically linked again with ex-boyfriend and convicted child molester Mark McDaniel. Not only did photos of the pair together surface on TMZ, but June was also accused of allowing him near 9-year-old Honey Boo Boo. She denied they were dating again, but reports claimed otherwise.

In October 2014, Mama June's oldest daughter, Anna "Chickadee" Cardwell, publicly confirmed via Radar Online that her mother's convicted pedophile ex-boyfriend, Mark McDaniel, had repeatedly molested her when she was 8 years old. Anna also revealed to People that she'd told her mother about what happened when she was a child but that June didn't believe her.

After facing scrutiny from fans and critics over Mama June's rumored rekindled relationship with convicted pedophile Mark McDaniel, TLC canceled "Here Comes Honey Boo Boo" in October 2014. As the scandal intensified, June finally admitted in November 2014 that she had indeed seen Mark after he was released from prison. She claimed to "Entertainment Tonight" that it was only to get closure for daughter Pumpkin, who once believed Mark might be her father (he's not), and because she felt sorry for him since he had leukemia — though she insisted they no longer spoke.

Mama June was romantically linked to her home remodeler, Geno Doak, in January 2016. But things must have soured quickly, because when contacted by Radar Online, Geno denied even knowing June. In March 2017, she told Us Weekly that she had "just kind of backed off from dating" and was concentrating on herself for now.

Shortly after WE tv aired the episode featuring Mama June's skin removal surgery on "Mama June: From Not to Hot" in the spring of 2017, fans learned she was incredibly unhappy with the results. Claiming she was in too much pain and felt "like Frankenstein," June called off future surgeries and shortly after was seen cheating on her healthy eating plan.

She ultimately got back in the saddle and on the March 31, 2017, episode of "Mama June: From Not to Hot," June Shannon debuted her slimmed-down new look. Through diet, exercise, and surgery, June — who once weighed 460 pounds — went from a size 18 to a size 4 over the course of 13 months. She told People magazine — which debuted exclusive photos of her body transformation — that she's determined to keep off the 300 pounds she lost. "I can promise you I'm never going back to that size," she said. "I'm happy where I'm at." 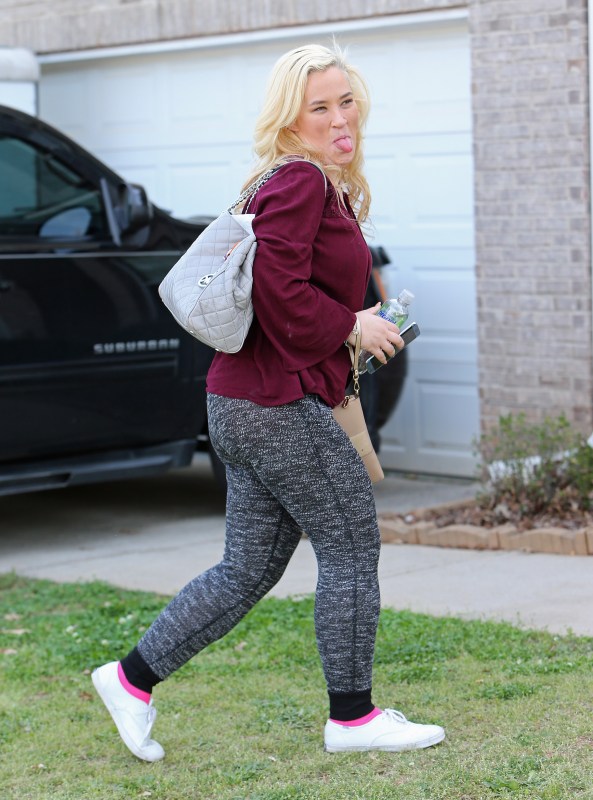 Up Next Mama June's ups and downs