On May 29, 2019, Jonathan and Drew Scott will debut a new show on HGTV, adding "Property Brothers: Forever Home" to their collection of "Property Brothers" television franchises. In celebration of the premiere, Wonderwall.com took the opportunity to get to know the Canadian identical twins really, really well. Here are 19 things you probably didn't know about them (but should!). Keep reading for more…

They owned their first business at age 7

The Property Brothers empire started early. When twins Jonathan and Drew Scott were 7, they started JAM (Jon, Andrew, Mom) Enterprises. Their product: wire hangers covered in fabric, which they sold door to door and to friends… and then in bulk to a Japanese wholesaler. "We would look at our bank accounts, and there would be $15,000 in there… we were savers, big-time," Drew told People magazine.

They've been remodeling and renovating professionally since they were 18

As kids, Jonathan and Drew would rearrange the furniture in their bedroom for fun. By the time they were in college, they'd figured out how to turn their childhood hobby into a real money-making operation. The duo were 18 when they bought a relatively cheap but garish home near campus with $250 down and after a quick flip came away with a $50,000 profit.

RELATED: The business of being Chip and Joanna Gaines

Along with Jonathan and Drew, big bro J.D. is the third member of the all-sibling production company Scott Brothers Entertainment. The three also hosted a radio show in 2013 called "Off Topic with the Scott Brothers." On his own, J.D. has hosted "All American Amusement Parks," and he also makes appearances on the Property Brothers shows.

They know how to get a laugh

Whether through sketch comedy, pranks or clowning (really!), the twins are big entertainers. Before their Property Brothers days, Jonathan and Drew Scott made extra money performing as clowns at kids' parties and in parades (with floats they designed themselves, of course). And while they've retired their animal balloons and face paint, they still perform sketch comedy and are known for pulling pranks on the sets of their shows.

Their personal collections are… interesting

From armor to swords to battle-axes, the brothers keep a large collection of medieval weapons in their shared Las Vegas home. And if that's not enough, Drew Scott also has an eye for coins. "I've had a coin collection since I was a kid and love finding new unique pieces to add to my collection," he told Out Traveler. "Yes, I admit this makes me a nerd."

That battle-ax in their weapon collection? It's a replica of one that belonged to 14th-century Scottish king Robert the Bruce, of whom they are descendents. Both mom and dad are of Scottish heritage, and as former competitive bagpipe players, brothers Drew and Jonathan Scott are clearly proud of that lineage.

They have a product line

If you like the Property Brothers' style, you're in luck: In 2015, Drew and Jonathan Scott launched Scott Living, a line of outdoor decor and furnishings for sale on QVC. Since then, they've expanded indoors, creating all sorts of furniture and home items that are now available from a variety of retailers.

Jonathan and Drew Scott aren't just pretty faces. Both hold black belts in karate. While they've each had success in competitions, Jonathan would probably come out on top in a fight. At one time, he was the Canadian national champion in Shotokan karate.

While Jonathan and Drew Scott are definitely best known for their work on their "Property Brothers" TV franchises, that's not their sole foray into the entertainment business. They spent years modeling — including in underwear ads — and also have had roles on TV shows like Canada's "Breaker High," "Smallville" (Drew) and "The X-Files" (Jonathan). Oh, and they wrote a book: "It Takes Two: Our Story."

One brother was a bonus

The guys' parents were only expecting one son, but… well… we'll let Drew tell this story. "They didn't do an ultrasound and the heartbeats were in sync. The doctor said it was one big baby," he told Glamour magazine. "Jonathan came out with a flat head, and I guess I was sitting on his head in the womb and gave him a nice a– print. The nurse said, 'I think there's another one!' My mother said, 'Oh sh–,' and then I came."

As The Scott Brothers, Jonathan and Drew have recorded and released several country songs over the last few years. "Hold On" — which also has a music video — climbed to No. 38 on the Billboard Country songs chart in 2016.

Well, at least not for the last 20 years or so. Drew and Jonathan Scott's most recent fight occurred when they were teenagers at the University of Calgary. Though the details of the dustup itself are fuzzy, Jonathan hasn't forgotten how it made him feel. "Drew was being annoying about something," he told The Daily Beast. "I got so angry that I clenched my teeth so hard that I broke them." Sounds like just getting along is the safer option.

Jonathan has a love for the somewhat fantastical

As a 13-year-old boy, Jonathan Scott made the (totally natural) shift from clowning to magic. As he told Real Style Network, "I won a lot of awards for my illusions. My illusions are a full Vegas-style show where there's music and dance and special effects and all kinds of stuff." He also had a very special item on his must-do-before-age-40 list: riding a unicorn. Unfortunately, it looks like that one didn't happen.

Drew is known for splitting his pants

Once again, a story Drew Scott is best equipped to tell: "They make fun of me because I have a tendency to split my pants open because I have nicely fitted suits," he told the Arizona Republic. "There's one pair of pants, I happen to be climbing up a hill, and of course, I'm going up these steps up the hill, and the camera's right behind me, and… [the pants] split right open on camera, and I have like, fuchsia boxers on."

They love (and build) haunted houses

Ever since the early years of the twins' home decor obsession, they've had one very particular — and spooky — specialization. "Jonathan and I have been building haunted houses since we were kids… We went all-out," Drew Scott told ONTVtoday. Jonathan Scott offered a little more insight to Out Traveler: "My secret obsession is haunted houses. I love them. Whether scary, cheesy, funny, or creepy — I'll take them all! It may stem from my love of Halloween growing up, or from my sadistic pleasure to spook people."

Jonathan has a thing for small dogs

Growing up, Drew and Jonathan Scott always had big dogs, but Jonathan's jet-set lifestyle necessitated a new canine strategy. His first small dog was a 2.5-pound Yorkie named Gizmo, and he now owns two little pups, Gracie and Stewie. The portability factor isn't the only reason Jonathan likes his pets itty-bitty: "The smaller the dog, the bigger you look," he told Modern Dog magazine. "My experience has been that women feel like they can trust a guy with little dogs."

Though several injuries derailed his dream of playing pro basketball, Drew Scott had serious skills at a young age. As he told Us Weekly, "In my college basketball days, I had a 43-inch vertical jump, on par with Dr. J and LeBron James. Picture a tall, skinny, dorky guy doing laps with Jumpsoles on."

The locavore movement isn't limited to food and other material goods — just ask Drew and Jonathan Scott, who hire local contractors, designers and construction workers in every city they film in. "We create about 150 jobs in every city that we go to, and that's the only reason why we get it done so fast, keep the quality high and keep the costs down," Jonathan told PopSugar. Bonus: If anything goes wrong after the Property Brothers team leaves town, there's still a local warranty.

You know how stars are always so much shorter in person than they seem on television? Well, not Jonathan and Drew Scott. Both brothers are 6-feet-5-inches tall — every bit of which comes in handy while on construction jobs. 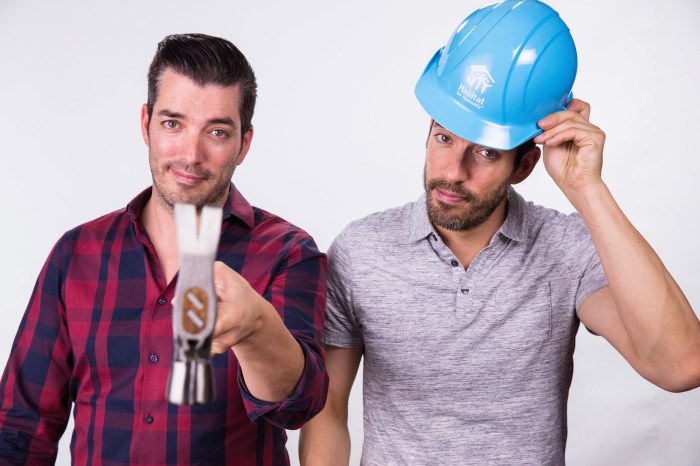 Up Next Twin time