Call us thirsty, but there's something about "Shazam!" star Zachary Levi that leaves us parched. Thankfully, Zach is turning up everywhere, from our favorite streaming TV shows to blockbuster hit films and, on June 17, 2019, he's hosting the MTV Movie & TV Awards (where he's also nominated for best hero and best comedic performance), giving us yet another chance to take a long, cool drink of this hunky Hollywood star. Join Wonderwall.com as we detail the many reasons we love Zach and why you probably should too…

Zachary Levi is the newest superhero in the DC Extended Universe. Joining the ranks of heroes like Wonder Woman, Batman and Aquaman is Billy Batson, a 15-year-old boy who magically morphs into a grown man with superpowers whenever he says the word "Shazam!" As a mystical man going through superhero puberty, Zachary manages to make our hearts skip a beat while also making us laugh until it hurts in a role that seems tailor-made for this handsome, hilarious star. The action-packed comedy arrived in theaters on April 5 and is scheduled for DVD release on July 16, giving us multiple chances to catch Zachary in full spandex-clad form.

RELATED: 20 of the hottest superheroes ranked

Look, we're not blind. Zachary Levi is easy on the eyes. With his melt-you-into-a-puddle smile, twinkling hazel eyes and sculpted 6-foot-4 frame, it's kind of hard not to fall head over heels in love with this handsome star.

No. 3: He's serious about mental health

Zachary Levi is more than a superhero onscreen — he's also a champion for healing our minds. Along with using his social media platforms to discuss his own mental health journey, Zachary announced in May 2019 that he's the new ambassador for Active Minds, a nonprofit dedicated to increasing the discussion of mental illness and increasing access to life-saving resources for students aged 14 to 25.

While some celebrities are indifferent to their fans, Zachary Levi is all about lifting and supporting them every step of the way. Just check out his Twitter feed, where he routinely retweets and replies to his followers with encouraging messages, including celebrating fans who've overcome immense hardships and reminding us that we are not alone.

Zachary Levi is more than just a talented actor. He's also an incredible singer who's shared his vocal talents on the Broadway stage and on the big screen, including in the 2010 Disney animated adventure "Tangled." He and co-star Mandy Moore even performed a powerful duet of their Academy Award-nominated song from the film, "I See the Light," at the 2011 Oscars. Over the years, Zach's been known to grab the mic and drop a song on unsuspecting listeners, belting out classic hits like Frank Sinatra's "L.O.V.E." as recently as April 2019 while visiting a New York City bar.

Is there anything sexier than a man who can make us laugh? Zachary Levi is bona fide funnyman, which makes us love him even more. Whether he's cracking jokes in interviews or online, he always manages to make us giggle. In fact, it was his playful sense of humor that won him the lead role in "Shazam!" After looking at more than 100 candidates for the part, director David F. Sandberg said it was Zachary's "big kid" personality combined with his enthusiasm and excitement that made him perfect for the comedic action-packed role.

We fell in love with Zachary Levi long before he was a muscle-clad superhero on the big screen. In fact, he got us in our feelings all the way back in 2007 when he landed the lead role on "Chuck," the comedy series about a computer nerd who accidentally downloads the nation's top secrets directly to his brain. The show, which co-starred "The Handmaid's Tale" actress Yvonne Strahovski and aired until 2012, showcased all of Zach's incredible, awkward talent, making us loyal fans for life.

Zachary Levi didn't just play a geek for five seasons of "Chuck" — he's a total nerd in real life too. Zachary is the founder of "Nerd HQ" — both the popular TV game series he hosted and the free offsite event that began at San Diego Comic-Con in 2011. Although the series ended in 2016, followed by the Comic-Con event shuttering in 2017, Zachary is reportedly working to turn "Nerd HQ" into a nonprofit organization, meaning no nerd will be left behind.

If you're a fan of Amazon Prime's "The Marvelous Mrs. Maisel," then you might recognize Zachary Levi as Midge Maisel's doctor fiancé, Benjamin. After two seasons of post-divorce drama between Midge and her cheating ex-husband, Joel, we think quirky, supportive (and extremely hot) Benjamin is the perfect solution to what ails Mrs. Maisel. We just hope Zachary will return for Season 3, which is still up in the air.

No. 10: He gives good social media

Along with posting the prerequisite hot selfies (like this pic from 2018), Zachary Levi also posts thoughtful and informative personal videos, notes about his day and, perhaps our favorite, screenshots of music tracks he's currently loving (like Lizzo's "Good as Hell") — and that's just on his Instagram feed. Over on Twitter, Zach's not shy about bantering with his fans, sharing inspirational quotes and kissy-face pics that make us all feel like we're his girlfriend. Basically, @zacharylevi is our favorite social media stop and we're not sorry.

If we've learned one thing about Zachary Levi, it's that he truly cares about others and isn't afraid to use his celebrity to do good. Along with his longstanding support of Operation Smile — he's helped fund more than 1,000 surgeries for children with cleft lips and palates — Zachary has supported numerous nonprofits including Feeding America, Clothes Off Our Back and Stand Up to Cancer. And in April 2019, Zachary teamed up with the Lollipop Theater Network to bring a private screening of his movie "Shazam!" to New York-area children battling chronic and life-threatening illnesses.

Zachary Levi is many things, but shallow is not one of them. The talented actor regularly delves deep to talk about issues that matter to him and to reflect on the wisdom he's gained over the course of his life. One of our favorites was this May 16, 2019, mini-master class Zach tweeted in which he tackled personal growth and self-acceptance, saying, "Acceptance. RADICAL acceptance. Accepting that you are where you are, nothing & no one can change anything about before right now, and that's okay, because you are entirely capable of moving FORWARD, embracing GROWTH, and living the mental/emotional life you've always wanted."

While we don't think stealing is cool, we adore how unabashed Zachary Levi is about his love for doggies. He's known for stopping strangers in the street and taking selfies with their pups. In this Aug. 12, 2017, Instagram post, Zachary joked, "Y'all, I just keep meeting dogs I wanna steal. It's not okay. I can't go down in life as 'Zachary Levi: Dog Thief.' Or can I?"

No. 14: He's a Tony-nominated Broadway star

Zachary Levi has crushed it on TV, in film and, it turns out, on the Broadway stage. After breaking into Broadway in 2013 with "First Date," he returned to the theater for the 2016 production of the musical "She Loves Me." His talent was rewarded that same year when he was nominated for a Tony Award for best lead actor.

Zachary Levi has more going on in his career than many realize. Not only is this hunky actor a leading man on stage and screen — he's also done time as a director and executive producer. In addition to his behind-the-scenes TV and film work, Zachary also happens to be the co-founder of the high-quality vegan fitness brand Flow Supplements, which he became passionate about while training to get in shape for his role in "Shazam!"

No. 16: He loves the great outdoors

Whether he's basking in the warm Texas sun, enjoying a day at the beach in Maui or playing beach football in New York, one thing is clear: Zachary Levi loves being outdoors, especially if it means he's near the ocean. In 2019, he shared on Instagram that he literally took the plunge and became scuba certified — he did an impressive five dives during the holiday season that year. Along with reminding us all to appreciate nature, Zach's foray into the deep sea reminds us of another DC superhero…

Is it wrong that we love Zachary Levi even more knowing that he's friends with another one of DC's biggest heartthrobs, "Aquaman" star Jason Momoa? The two have been known to share supportive, playful posts on Instagram and pose for the occasional pic (we're not complaining), leaving us to daydream about an Aquaman-Shazam mash-up in the future.

Zachary Levi shared on "Access Live" in April 2019 that he's spent the last few years working on himself and waiting for the right woman to come into his life. Since his one-year marriage to actress Missy Peregrym came to an end in 2015, Zachary has kept his love life on the DL, though he did reveal during the "Access" interview that he's used an online dating app before, which means we should all update our Tinder profiles (just in case).

No. 19: He's all about building up the next generation

If you want to know what's important to a person, look at what they value. For Zachary Levi, that's clearly the success and well-being of the younger generation. Along with posting unlimited cute pics of his beloved nephew Griffin, Zachary is also a fan of giving mad love to his young co-stars, including in this March 10, 2019, Instagram pic in which he praised "Shazam!" actors Asher Angel and Jack Dylan Grazer, calling them "ridiculously talented…intelligent, humble and kind." He ended the post with his trademark humor, writing, "I can only hope they remember me years from now when they're still crushing the game, and I'm old, irrelevant, and in need of a job to keep my union insurance active. Dentures don't pay for themselves, after all."

While some hunky actors get stuck playing the same role with a different name throughout their careers, Zachary Levi has an almost chameleon-like ability to transform himself onscreen, and we love it. Along with playing a computer nerd-turned-spy, an immature superhero and an eccentric doctor from the 1950s, Zachary's also been a bereaved father with anger issues, a traveling hobo with mystical insight and even an Asgardian warrior — proving there's no part he can't play. 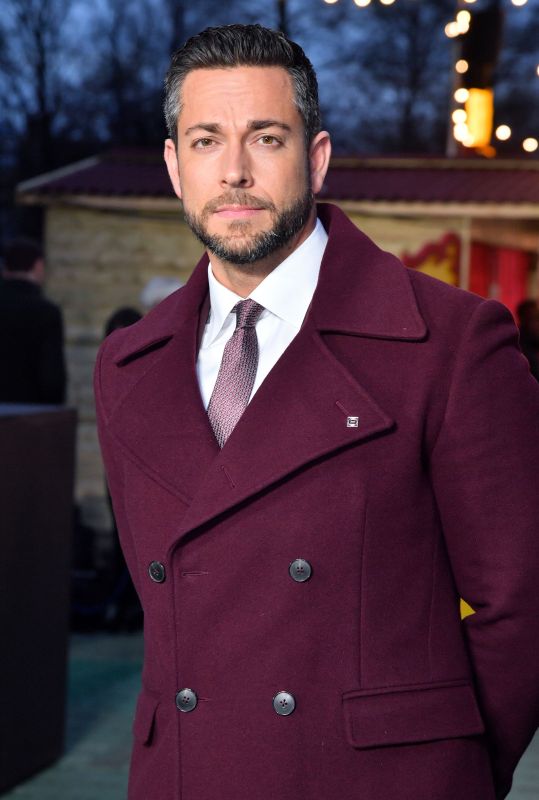 Up Next Sexy Shazam