The hit Netflix series "Emily in Paris" just scored two big nods — best actress in a musical or comedy TV show for star Lily Collins as well as best musical or comedy TV series — when the 2021 Golden Globe Awards nominations were announced on Feb. 3. To celebrate, Wonderwall.com is taking a look at the best photos and most fashionable moments from the first season of the show, which chronicles what happens when the titular Midwestern Gen Z-er scores a once-in-a-lifetime opportunity to move to Paris for work and meets gorgeous people, improves her wardrobe game and crushes it on the career front. Keep reading for more…

RELATED: The best TV shows and movies set in Paris

Camille Razat, who plays Camille, and Emily take part in an ad campaign in Paris in "Emily in Paris."

Emily and Mindy share a meal at Gabriel's restaurant in the Netflix series "Emily in Paris." Gabriel is played by Lucas Bravo.

Julien Floreancig, who plays Thomas the professor, and Emily share a romantic evening in "Emily in Paris."

Bruno Gouery, who plays Luc, and Samuel Arnold, who depicts Julien, star as Emily's stylish and hilarious co-workers in "Emily in Paris."

Camille shows off her amazing fashion in "Emily in Paris."

Ashley Park and Lily Collins appear in the Netflix series "Emily in Paris" in 2020.

Antoine Lambert, depicted by William Abadie, is one of Emily's biggest clients at her marketing agency in "Emily in Paris."

Paul Brossard, who stars as the whimsical Arnaud Viard, who also happens to be Camille's dad, enjoys some champagne while chatting with Emily and Gabriel in "Emily in Paris."

Emily makes a case to bring back bucket hats all throughout "Emily in Paris."

Emily helps model a custom white dress for charity in "Emily in Paris."

In an effort to show off her life in Paris, Emily takes photos of the things she sees in Paris — like this fashionable woman not picking up her dog's poop. Hey, it works in "Emily in Paris!"

Emily and Julien showcase the fashion and champagne while promoting their clients in "Emily in Paris."

Throughout the whole show, Emily and Gabriel fight their intense attraction and feelings for each other — despite the fact that Gabrielle is dating Camille!

Emily has an Audrey Hepburn moment in "Emily in Paris" while at the ballet.

Emily shows off her colorful fashion sense in "Emily in Paris."

Sylvie and Emily show off their individual styles during a meeting with clients in "Emily in Paris."

Emily dons all pink and red for a night on the town in Paris in "Emily in Paris." 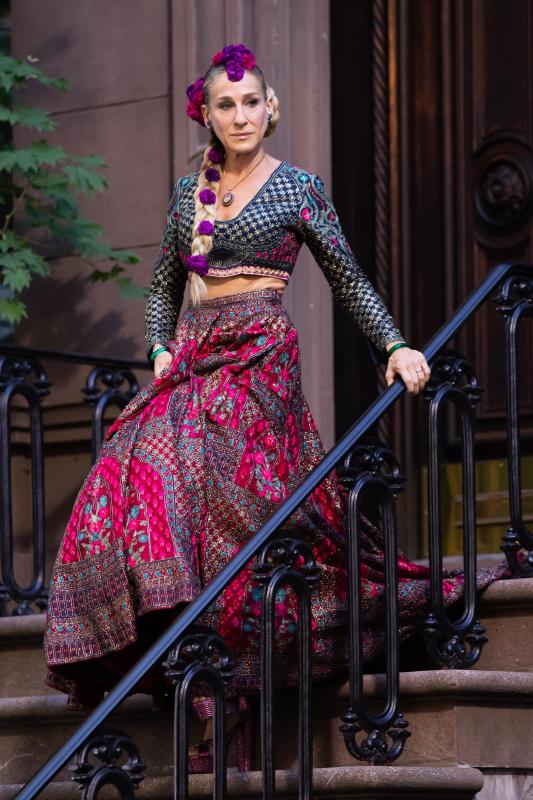