Dressing a baby bump isn't easy, but somehow our favorite Hollywood moms have been able to do it flawlessly. Wonderwall.com has rounded up the most memorable maternity red carpet ensembles from your favorite celebrities — starting with this showstopper from Jennifer Lawrence. The beauty, who hasn't made her due date public, showed off her bump in style in a dazzling Dior gown at the premiere of her movie "Don't Look Up" in New York City on Dec. 5, 2021. The golden frock featured delicate fringe detail and a semi-sheer cape for an overall ethereal vibe that matched the star's pregnancy glow.

Making a pregnancy announcement on the red carpet requires a perfect fashion moment — and Blake Lively delivered in this department in May 2019 when she hit the red carpet for the premiere of husband Ryan Reynolds' film "Pokemon Detective Pikachu" in this sequined yellow gown by Retrofete. The spaghetti-strap dress, which included a matching sash fastened atop her growing belly, highlighted just how far along she was in her pregnancy with her third daughter, Betty.

One of the most iconic maternity red carpet moments took place at the 2011 MTV Video Music Awards. Beyonce donned this one-shouldered fiery orange Lanvin gown that showed off her burgeoning baby bump when she was pregnant with daughter Blue Ivy Carter.

RELATED: Stars who had babies and adopted in 2021

The floral Riccardo Tisci gown and gloves that Kim Kardashian West wore to the 2013 Met Gala provided a jaw-dropping maternity moment that became an instant meme. The star was pregnant with daughter North West at the time.

At the 2006 Golden Globes, Gwyneth Paltrow was on hand as a nominee. While pregnant with her second child, son Moses Martin, she showed off her maternity style in this romantic cream-hued Balenciaga gown covered in lace, ruffles and pleating.

We'll never forget Kerry Washington's memorable Brandon Maxwell maternity look at the 2016 Primetime Emmys. The "Scandal" star was expecting daughter Isabelle Asomugha when she arrived in this fitted black gown, which included an impossibly cool train detail that cascaded from the back of her ensemble.

Bumping along in Chanel! Kate Hudson rocked this silver Chanel Haute Couture ensemble comprised of embellished sheer fabric over a bandeau-style top and a knee-length skirt at the 2003 Venice Film Festival. She was pregnant with son Ryder Robinson at the time.

Though it wasn't exactly a red carpet, it was one of the most photographed events of the decade! Victoria Beckham was pregnant with daughter Harper Seven when she attended Prince William and Kate Middleton's 2011 royal wedding. For the occasion, she wore a navy blue shift dress, added a matching fascinator and braved super-high Christian Louboutin platform stilettos.

Did you know that Catherine Zeta-Jones was nine months pregnant when she won her Academy Award in 2003? Yep, the actress was 10 days away from her due date with daughter Carys Douglas when she donned this shimmering chocolate brown Versace gown featuring a sweetheart neckline, a cold-shoulder detail and a column-style skirt with a knee-high slit up the center.

Olivia Wilde was expecting son Otis Sudeikis when she dressed her bump in emerald green Gucci at the 2014 Golden Globes. The long-sleeved gown was covered in sequins and featured a floor-length silhouette.

Jennifer Lopez rocked a gorgeous red carpet look just days before giving birth to twins! Yep, the superstar donned this dark brown Gucci gown, which she belted above her bump, at a UNICEF event in 2008 a mere two weeks before delivering Max and Emme Muniz.

Jennifer Garner showed off her first baby bump — when she and Ben Affleck were expecting daughter Violet — at the 2005 Primetime Emmys. That night, the star attended in this strapless black Badgley Mischka gown that featured a jeweled embellishment at the neckline and a fitted silhouette.

Naomi Watts selected a pale yellow Escada number to dress her bump at the 2007 Academy Awards. Her silk off-the-shoulder frock featured a black satin sash detail that drew attention to her blooming shape while pregnant with her first child with then-love Liev Schreiber, son Sasha.

It was a Versace maternity moment for Kate Hudson in 2011. The star attended the premiere of "Something Borrowed" in this lovely yellow gown that featured a halter-style neckline and a flowing pleated skirt with a diminutive train. She was expecting son Bingham Bellamy at the time.

Another soft pastel yellow moment took place at the 2011 Grammys! This time it was Jewel's turn to show off her baby bump in the soft shade. She donned a one-shouldered Pamella Roland column-style selection while pregnant with son Kase Murray.

Chrissy Teigen showed off her baby bump when she was pregnant with son Miles at the 2018 Grammys. The model and cookbook author chose a sparkly silver Yanina Couture frock with dramatic draped sleeves, a shiny silver belt detail at the waist and a high center slit as she attended with husband John Legend.

When it came time for Cate Blanchett to dress her baby bump at the 2008 Oscars, she turned to Dries Van Noten. The stylish star selected this navy blue frock featuring a halter-style neckline, floral details down the skirt and a high-low hemline that showed off her pointy-toe silver pumps. She was expecting her third son, Ignatius Upton, at the time.

Kim Kardashian West showed off her big baby bump in an all-white Valentino gown at the InStyle Awards back in 2015. Her frock featured a cape-style detail — which seems to be a popular celebrity maternity fashion element — in addition to its form-fitting silhouette. She gave birth to son Saint West less than two months later.

One of our all-time favorite celebrity maternity looks has to be the romantic Valentino Haute Couture gown Keira Knightley wore to the 2015 Academy Awards. The star arrived in this dreamy cream-hued sleeveless frock with floral and script embroidery across the top layer of ethereal tulle. She was pregnant with daughter Edie Righton at that time.

One of our favorite looks ever on Blake Lively happened to be a maternity dress! The star stunned on the Cannes Film Festival red carpet in 2016 in this Atelier Versace number comprised of embellished electric blue fabric, one off-the-shoulder sleeve and a fitted silhouette with a thigh-high slit. The star was pregnant with her first child — daughter James Reynolds — at the time.

When Gwen Stefani wanted to have a major maternity moment at the 2006 Grammys, she rocked a design by her own label, L.A.M.B.! The music star donned a one-shouldered leopard-patterned gown with a skirt featuring a cool ombre effect. Son Kingston Rossdale was born three months later.

For her 2006 Emmys appearance, Heidi Klum donned a gorgeous ruby red Michael Kors gown. She was pregnant with son Johan Samuel when she wore this frock that featured one sleeve, Grecian-inspired draping and a thigh-high slit that helped show off the strappy silver sandals she paired with the look.

Alicia Keys showed off her baby bump in a show-stopping Givenchy design at the Keep A Child Alive ball in 2014. The off-the-shoulder number featured sparkly silver bordering the neckline that gave way to a beautiful black gown with an empire waist — the perfect silhouette to show off her pregnancy with son Genesis Dean.

Elsa Pataky donned a gorgeous green Elie Saab gown that featured beautiful beading and a deep-V neckline at the 2014 Academy Awards. At the time, she was expecting twins Sasha and Tristan with husband Chris Hemsworth.

KMazur/WireImage for The Recording Academy 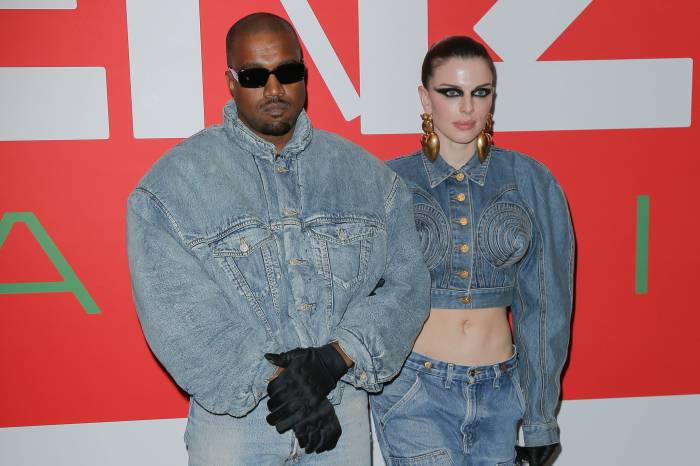