On June 9, Bravo released a statement announcing that it had fired "Vanderpump Rules" stars Stassi Schroeder, Kristen Doute, Max Boyens and Brett Caprioni amid resurfaced allegations of racist behavior. During an early June Instagram Live, former "Vanderpump Rules" star Faith Stowers — one of just two black members of the cast so far — claimed that she was constantly verbally attacked by her white co-stars following her affair with Jax Taylor. "They wanted to attack, attack, attack, attack, attack. I was wrong, I was this, I was that, calling me names, saying my hair was nappy," she said before reminding fans that back in 2018, Stassi and Kristen falsely accused her of a crime: After they read a tabloid report about a black woman wanted for theft, the twosome compared the woman's tattoos, hair and clothing to Faith's and then reported their former co-star to police. "They thought it was me because it was a black woman with a weave," said Faith. "They just assumed it would be me, and they called the cops on me." (During a 2018 podcast interview, Stassi bragged that she and Kristen "solved a crime," while Kristen shared the tabloid report on Twitter and asked her followers, "Doesn't this ex #pumprules thief look familiar?") As for Max and Brett, after the two men joined "Vanderpump Rules" as series regulars in January, fans unearthed a trove of racist comments they made on Twitter between 2011 and 2013.

On June 12, "Good Morning America" announced some big news: 28-year-old real estate broker, entrepreneur and community organization founder Matt James will be the next star of "The Bachelor" — and the franchise's first ever black leading man. Rachel Lindsay made history in 2017 when she starred as the first black lead of counterpart "The Bachelorette." "Matt has been on our radar since February, when producers first approached him to join Bachelor Nation, as part of Clare [Crawley's upcoming] season [of 'The Bachelorette']. When filming couldn't move forward as planned [due to the coronavirus pandemic], we were given the benefit of time to get to know Matt and all agreed he would make a perfect Bachelor," ABC Entertainment President Karey Burke said in a statement. "We know we have a responsibility to make sure the love stories we're seeing onscreen are representative of the world we live in, and we are proudly in service to our audience. This is just the beginning, and we will continue to take action with regard to diversity issues on this franchise. We feel so privileged to have Matt as our first Black Bachelor and we cannot wait to embark on this journey with him." Matt's season will premiere in 2021.

Terry Crews faced backlash over a controversial tweet about equality amid the Black Lives Matter movement: "Defeating White supremacy without White people creates Black supremacy. Equality is the truth. Like it or not, we are all in this together," he tweeted on June 7. Among the responses to the tweet, comedian Godfrey wrote, "[There's] no such thing as Black Supremacy. That is a tactic that Racist whites use to counteract our rebellion to their horrific treatment of us. It's called gaslighting. Black pride isn't anti white." Terry later attempted to clarify his original intention: "I was not saying Black supremacy exists, because it doesn't. I am saying if both Black and Whites don't continue to work together — bad attitudes and resentments can create a dangerous self-righteousness. That's all," he wrote. The following day, he added that his comments come "from a spirit of love and reconciliation, for the Black community first, then the world as a whole, in hopes to see a better future for Black people."

On June 8, the official Twitter account for "The Challenge" announced that the MTV show had "severed ties" with Dee Nguyen "as a result of [her] offensive comments on the Black Lives Matter movement." The current season of "The Challenge," which is nearing its conclusion, will continue airing as planned "out of respect" to her co-stars. "We strongly condemn systemic racism and stand with those raising their voices against injustice," added the MTV reality show. Dee came under fire for trivializing the Black Lives Matter movement when she tweeted on June 6, "[I don't know] why some of [you] think I'm anti BLM. I've been saying that since the day I lost my virginity." To make matters worse, after a fan suggested that she "wake up" and realize that "people are dying," Dee replied, "People die every f—— day."

On June 8, The Hollywood Reporter broke the news that Hartley Sawyer got the boot from "The Flash" — on which he'd portrayed Ralph "Elongated Man" Dibny since 2017 — after racist, homophobic and misogynistic tweets from before his time on the show resurfaced. "Hartley Sawyer will not be returning for season seven of 'The Flash,'" read a statement from The CW, executive producer Eric Wallace and producers Warner Bros. TV and Berlanti Productions. "In regards to Mr. Sawyer's posts on social media, we do not tolerate derogatory remarks that target any race, ethnicity, national origin, gender or sexual orientation. Such remarks are antithetical to our values and policies, which strive and evolve to promote a safe, inclusive and productive environment for our workforce."

"This Is Us" and "Kidding" writer Jas Waters dies at 39

On June 10, the official Twitter account for the writers of "This Is Us" announced the death of former journalist Jas Waters, who served as a staff writer on the second season of the hit NBC series. (She also worked as a story editor on Showtime's "Kidding" and had a "story by" credit on 2019's "What Men Want.") The following day, the Los Angeles County Medical Examiner-Coroner's revealed that she took her own life on June 9. She was 39.

On June 8, TMZ published a three-page letter Joe Exotic wrote to his supporters on June 1 from the Texas prison where he's five months into a 22-year sentence for his role in a murder-for-hire plot and animal abuse crimes. In the three-page letter, the "Tiger King" star asks Donald Trump to "look into making this wrong a right" by granting him a pardon now that the coronavirus pandemic is "over." (He also pleads with prison reform advocates Kim Kardashian West and Cardi B to hear his "scream for help.") Writes Joe of his mental state, "My soul is dead, I struggle everyday to hold on to what little hope I can find. [The guards] keep me locked down 24/7 with no phone, email or commissary, and you will never understand the mental abuse this does to a person." He goes on to say that he needs "blood infusions every 4 weeks" because he was born with CVID (common variable immune deficiency) and hemoglobin anemia, but he hasn't gotten a transfusion since late January, he claims, which has caused him to suffer weight loss and sores that won't heal. "I'll be dead in 2-3 months," he writes. "It's like I have been sent to Death Row. They stopped all of my medication except one. This place is Hell on Earth." He also describes the lack of communication from his husband, Dillon Passage, as "mental torture" and says that he feels like he's been "dumped like a dog in a shelter." (Dillon later wrote on Instagram that he's "been writing letters and it is a shame to hear that [Joe] isn't receiving them.")

On June 10, "Duck Dynasty" star Willie Robertson took to Instagram to share the results of his first haircut in 17 years. "Everyone else is going back to the barber, I figured I should try it too," he captioned a video depicting his transformation. "I feel myself getting weaker," he jokes as a hairstylist goes to work on his signature mane. "I feel like a schoolboy. … I cannot wait to go to a store and no one knows who I am. I will be so excited," he adds. The video then shows Willie following around wife Korie Robertson — who completely fails to recognize him when he comes up behind her at a fast-food restaurant — and surprising other family members with his new look.

On June 9, Collider published an excerpt from "The Office: The Untold Story of the Greatest Sitcom of the 2000s," in which the makers of the hit series explain how the season 6 episode centered around Jim and Pam's wedding almost looked very different: In an early iteration of the episode, Pam's deluded ex-fiancé, Roy, attempts to win her back by crashing her wedding, riding a horse into the church while dressed as a knight. After he sees that she's pregnant, he realizes her love for Jim is the real deal and leaves. While sitting dejected outside the church, he encounters Dwight, who's spent the entire episode up until that point discussing his obsession with the idea of going over Niagara Falls. Dwight then takes the horse and "somehow finds himself riding along the banks of the Niagara River." He ultimately loses control of the horse but manages to jump off before the animal plunges hundreds of feet into the water. The episode would show newlyweds Jim and Pam "having a romantic moment" on a boat, "and in the background we see this white horse go tumbling over Niagara Falls." Many of the writers "aggressively" pushed back against the concept. Ultimately, it was Steve Carell who managed to convince showrunner Greg Daniels it was a bad idea. After the table read for the episode, the actor-producer said the bit was "a cartoon joke" you might see on "The Simpsons" and that "throwing a horse over Niagara Falls is really jumping the shark." The writers were left with just a week to rework the episode, which is now a fan favorite. 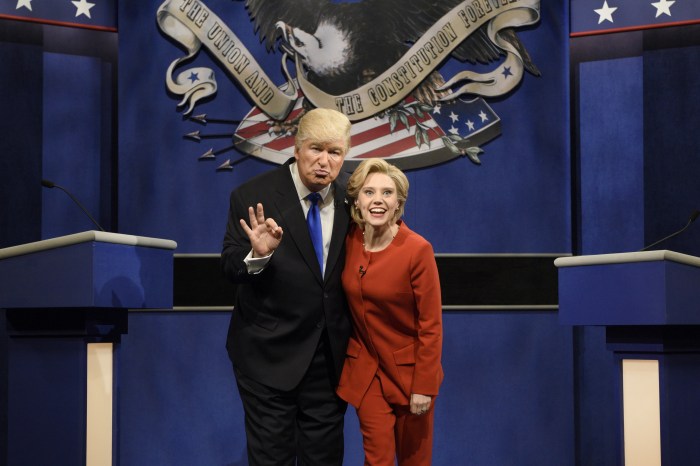