Now more than ever, celebrities are either embracing their natural gray or white hair or even deliberately dyeing their locks the light hues! Join Wonderwall.com as we take a look at some of the stars who are rocking the gray… starting with Allison Janney. The Oscar- and Emmy-winning actress revealed in February 2021 that she spent most of 2020 in Ohio as the word shut down amid the coronavirus pandemic, and "a big, healthy few inches of gray roots came in and I just decided I wanted to be free from hair color and hair extensions," which she'd relied on for years, she told talk show host Ellen DeGeneres. In April 2021, she gushed to talk show host Drew Barrymore about how much she loves her natural color as well as having shorter hair. "I cannot tell you how amazing it is to feel free. Free from hair color and hair extensions and hair tapes and blah blah blah," she said. "To be able to run my hands through my hair and hopefully sometime a man will be able to run his hands through my hair and appreciate it, it's just heaven. I'm enjoying this new chapter in my hairdo world."

Steve Carell is a silver stud! When the "The Office" alum debuted his gray hair in 2017, fans instantly took to the new look. In 2018, he quipped of being branded a silver fox, "I am so sick of people just looking at me for my physical attributes. It's just genetic. There's nothing I can do."

RELATED: Actors who started out as male models

After years of coloring her hair, actress Diane Keaton debuted naturally gray locks in 2014 — and she's kept it ever since!

The undisputed queen of gorgeous gray locks? Helen Mirren. In a 2015 interview with the Daily Mail, the British actress spoke about how women shouldn't feel pressured to modify their looks based on trends. "I loved it when I dyed my hair pink. A lot of women get stuck at what they are good at and what they did between the ages of 18 and 28 and they never have the courage to change that," she said. "Some people have a classic haircut and it works for them and that's great, but it's much better to accept how you look now and then be modern."

Jamie Lee Curtis has spoken about letting her hair go gray instead of trying to hide it, telling Everyday Health in 2017, "The epiphany came when I was sitting in a hair salon thinking, 'What the eff am I doing putting a chemical on my head that burns?'"

Grammy winner Emmylou Harris's silvery-white hair has been her signature for decades. She went prematurely gray in her early 20s and dyed it at first but eventually decided to embrace her natural color. "A lot of times, Mother Nature knows what she's doing," the singer-songwriter once told People magazine. "It's the best thing I ever did."

This is new! While Sharon Osbourne was known for her signature deep red hair — a look she sported for two decades thanks to weekly coloring sessions — she decided to switch things up in 2020 and go for a more natural-looking silvery-white look! "I was just so fed up of going and having it dyed and having it dyed, and I just felt like, I can't do this anymore," she explained on "The Talk." "I'm like, why am I trying to do something or be something that I'm not? So, just be who you are."

Maybe Sharon Osbourne was inspired by her daughter! There was a time Kelly Osbourne opted for an edgy, silvery-gray look. The British television personality has rocked a lot of hair colors over the course of her career, and this is just another one she's pulled off.

George Clooney turned into a silver fox about a decade after he left the hit medical drama "ER," on which he sported a dark brown Caesar cut.

Meryl Streep is another acclaimed actress who looks as classy as ever with gray hair. Instead of trying to maintain her blonde locks, in recent years, the Oscar winner has opted to let her hair grow in gray. (We also adored her silvery-white look when she played Miranda Priestly in "The Devil Wears Prada.")

English actress Judi Dench was once blonde, but she's since embraced a bold white hair color. Her natural-hued pixie cut has become part of her signature look.

It's hard to believe that Steve Martin didn't always have this hair color — it used to be brown! The beloved Hollywood star has been rocking white hair — he went prematurely gray in the mid-'70s when he was barely 30 — for decades.

While actress Glenn Close's look in "101 Dalmatians" was definitely bold, we can't help but love her real-life silver hair!

Emmy Award-winning actress Blythe Danner might have rocked her blonde looks for the majority of her career, but she's more recently opted for a muted silver look — and we love it on her!

Idris Elba is another A-list celebrity who doesn't mind going natural! The "Luther" star's graying beard has become part of his signature look.

"West Side Story" star Rita Moreno looks cute and spunky with her silvery locks! While some people fear that going gray means looking older, that couldn't be further from the truth for this star.

Where you lead… we will follow! Acclaimed singer-songwriter Carole King has opted to let her natural blonde locks grow into a silvery white-blonde look.

Former "What Not to Wear" host Stacy London has long rocked a signature silver streak, and in recent years she's also let her natural dark locks turn gray. There's one thing we know for sure — she looks stunning!

Patrick Dempsey still looks as handsome as ever with his salt-and-pepper hair. While he was rocking a darker hue when we first saw him on "Grey's Anatomy," the actor has since embraced his natural silver strands. We are definite fans!

Lady Gaga has dyed her hair many colors — truthfully, she's rocked every single one of them at some point! She's pictured here at the 2015 Grammy Awards rocking a silvery purple hue. The actress-hitmaker can make any color look good!

"Watch What Happens Live" host Andy Cohen has insisted he's never dyed his hair. "I promise you I'm not dyeing my hair," the previously dark-haired Bravo silver fox said during an episode of his show in 2013. "I've never [dyed my hair]."

Comedian Jon Stewart once had dark brown locks but over the years, the former "The Daily Show" host has opted to let his hair go gray.

"Girls" alum Zosia Mamet has gone through her fair share of hair colors, and silvery purple was one of them. While she's since dyed her naturally brunette hair auburn, her edgy gray locks (pictured here) were definitely memorable! 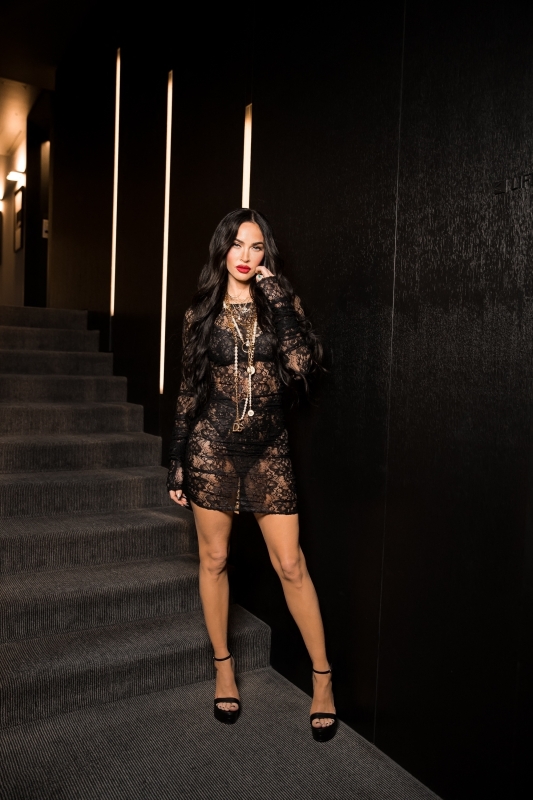