Hollywood is full of beautiful people, so it's no surprise that many stars' children take to the runway after inheriting mom or dad's good looks. Join Wonderwall.com as we check out some of our favorite celebrity children who model… starting with Kaia Gerber. The daughter of supermodel Cindy Crawford and bar, nightlife and spirits entrepreneur Rande Gerber began her career when she posed for Young Versace at just 10 years old. More recently, the beauty — a regular on global fashion week runways — in 2020 starred in the "Twist bag" spring/summer campaign for Louis Vuitton and in 2021 starred in Celine's sporty-chic spring/summer 2021 campaign. Keep reading for more celebs kids who model…

From her last name alone, it should be pretty clear who her famous father is! Lily-Rose Depp, the daughter of actor Johnny Depp and singer-actress Vanessa Paradis, made her modeling debut in 2015 when she appeared in a spread for Oyster magazine. Lily-Rose has also established herself as a sought-after actress with credits in films including "A Faithful Man," "Planetarium" and "The King." In 2017, the Chanel ambassador's modeling career enjoyed a major moment — she closed out the French fashion house's runway show in an extravagant pink bridal dress.

Though she in recent years garnered lots of attention for her buzzed-about three-year relationship with much older reality TV star Scott Disick, Sofia Richie first found fame as a model. The daughter of singer Lionel Richie and former dancer and fashion designer Diane Alexander first modeled for Teen Vogue at 14 and went on to appear in editorials for magazines like Elle Girl, Dazed and Nylon. In 2020, she graced the covers of U.S. Cosmopolitan's April issue as well as U.K. Cosmopolitan's July issue.

Dylan Brosnan is the eldest son of 007 star Pierce Brosnan and former journalist Keely Shaye Smith. The 6-foot-5 celebrity scion made his catwalk debut in the Saint Laurent show during Paris Men's Fashion Week in 2015. He's also modeled for Burberry and has been featured in GQ Germany.

Model good looks run in the family — Dylan Brosnan's 6-foot-1 younger brother, Paris Brosnan, is repped by Next Models and has walked in fashion shows for Balmain and Dolce & Gabbana, among others. He's also posed for magazines including GQ Korea, Teen Vogue and Vanity Teen. More recently, Paris — who's also a painter — in 2020 fronted the campaign for fellow Malibu resident Rande Gerber's collaboration with the sustainable fashion brand Bleusalt and in early 2021 was featured as one of the cover subjects for VMAN's "New Rulers" issue. He's seen here on the runway alongside model Stella Maxwell at the Fashion for Relief spring/summer 2020 show during London Fashion Week in September 2019.

As the daughter of rock star dad Mick Jagger and model mom Jerry Hall, Georgia May Jagger has been in the spotlight since she was a child. But in 2008, she signed with Independent Models and since then, she's walked runways for luxury fashion houses like Fendi, Burberry and Marchesa and starred in ad campaigns for brands like Rimmel London. In 2021, Wrangler announced that Georgia May was the new face of its Heritage Women's Denim Collection.

In 2015, Willow Smith — the daughter of actors Will Smith and Jada Pinkett Smith — landed her first modeling contract with The Society. Since then, she's continued to work, focusing on her talents as a singer-songwriter: In 2019, she released her third studio album, "Willow," which was followed by a collaborative quarantine album with partner Tyler Cole, "The Anxiety," in 2020. In October 2020, the "Meet Me At Our Spot" singer — who also helps host "Red Table Talk," her mom's Facebook Watch show — walked the runway in Rihanna's Savage x Fenty Show Vol. 2 in pieces from RiRi's fall collection.

Iris Law has been cultivating quite the impressive career in the fashion industry. The actress-model, whose parents are actor Jude Law and actress-turned-fashion designer Sadie Frost, in 2021 starred in a campaign for lingerie brand La Perla and was named a Dior Beauty ambassador. The "it" girl landed her first modeling gig in 2015 in a campaign for Illustrated People's pajama line.

Considering she's the daughter of supermodel Christie Brinkley (and the legend's ex-husband Peter Cook, an architect), it's no surprise that Sailor Brinkley Cook has taken an interest in modeling too! The beauty, who's signed to IMG Models, made her first foray into the fashion industry when she graced the cover of Teen Vogue's August 2013 issue. In 2018, Sailor posed for the Sports Illustrated Swimsuit Issue.

Daisy Lowe, the daughter of Bush frontman Gavin Rossdale and fashion designer Pearl Lowe, found fame as a model at 15 during the aughts. Since then, the British beauty has graced the cover of Vogue Italia, appeared in editorial campaigns for magazines including Elle, Vogue, GQ, Marie Claire, Interview, Nylon and Grazia and modeled for luxury fashion houses like Chanel, Burberry and Louis Vuitton. She's seen here in a Vivienne Westwood Red Label show during London Fashion Week in 2015.

Corinne Foxx, whose dad is actor Jamie Foxx, made her modeling debut in 2014 and her runway debut during New York Fashion Week in 2016 when she walked for Kanye West's Yeezy line. The actress-model, who graduated from the University of Southern California, has worked with several brands including Ralph Lauren, Dolce & Gabbana and Kenneth Cole.

Ireland Baldwin — the daughter of Alec Baldwin and Kim Basinger — has followed in the footsteps of her mom, who was a model before she was an Oscar-winning actress. Los Angeles native Ireland began her career in 2013 when she signed with IMG Models. After making her debut in a New York Post swimwear editorial that same year, she went on to grace the covers of Elle Bulgaria, Marie Claire Mexico, L'Officiel Ukraine and Grazia, in addition to appearing in ad campaigns for Guess and True Religion jeans.

Brooklyn Beckham began his modeling career in 2014 at 15. As a teenager, the eldest son of David and Victoria Beckham graced the covers of several high-fashion publications including Vogue China, Interview, Dazed Korea, Miss Vogue and L'Uomo Vogue. Brooklyn, who briefly studied photography at the Parsons School of Design in New York City, interned for acclaimed British photographer Rankin in 2019.

Patrick Schwarzenegger, whose parents are movie star-turned-politician Arnold Schwarzenegger and journalist Maria Shriver, modeled in Tom Ford's 2014 fall campaign alongside Gigi Hadid and has appeared in magazines like V Man and Interview. The Los Angeles native also acts: He starred as a cruel jock in the 2021 film "Moxie" and has two more movies on the way, "Warning" and "Stowaway."

Sean Penn and Robin Wright's daughter, Dylan Penn, has worked for Stuart Weitzman and Gap in addition to gracing the covers of magazines like W, Elle and GQ. The model-actress, who notably starred in Nick Jonas' "Chains" music video in 2014, has also appeared on the cover of L'Officiel and walked in Milan Fashion Week.

Mathilda Gianopoulos is the daughter of Panio Gianopoulos and Brat Pack queen Molly Ringwald. She began modeling at 13 when she appeared during a presentation for J.Crew in 2017. She most recently modeled in Andrew Warren's Just Drew presentation during New York Fashion Week in 2020.

Singer-model Paris Jackson, the daughter of Michael Jackson and Debbie Rowe, made her runway debut during Paris Fashion Week in 2020 when she modeled for Jean Paul Gaultier's spring/summer haute couture collection.

Manolo Gonzalez Vergara, the son of Sofia Vergara and ex-husband Joe Gonzalez, made his modeling debut when he appeared in a spread for Paper Magazine back in 2016 (prior to that he appeared alongside his famous mom in a Head & Shoulders ad campaign). While he has experience in the world of fashion, his passion lies in a different industry — film! In 2015, Manolo graduated from Emerson College with a degree in film production.

Ava Phillippe, the daughter of actors Reese Witherspoon and Ryan Phillippe, has long turned heads for her uncanny resemblance to her Oscar-winning mom. As a teen, Ava starred in a campaign for Rodarte's 2018 fall collection. The up-and-coming model is currently a student at the University of California, Berkeley.

While she's established herself as an A-list actress, having starred in films like the "50 Shades of Grey" movie series, "How to Be Single" and "Suspiria," Dakota Johnson — the daughter of actors Melanie Griffith and Don Johnson — once had a burgeoning modeling career. In 2006, she signed with IMG and was also the face of Mango jeans. The actress, who will next appear in the films "The Lost Daughter" and "Am I OK?," used her old modeling experience to her advantage when she graced the covers of several noteworthy publications including Vogue, Vanity Fair, Elle and Glamour to promote her movie projects. 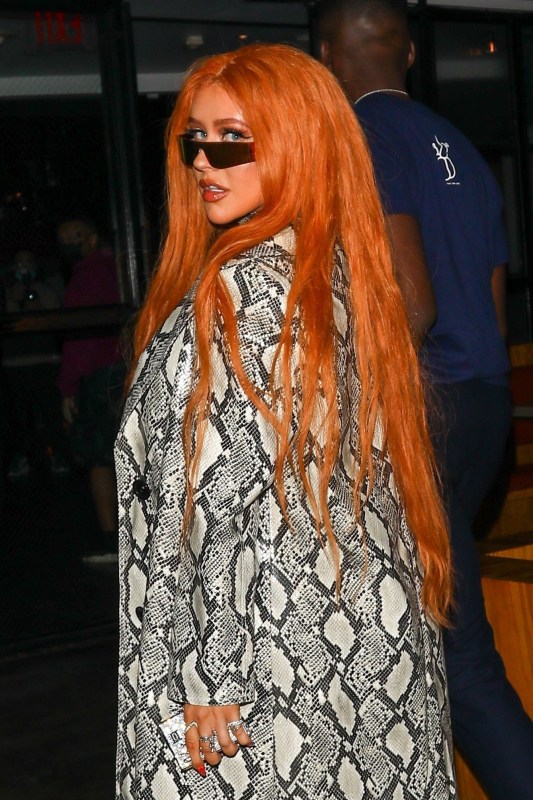