It's Broadway's big night! The 2017 Tony Awards took place on June 11, and the brightest stage stars turned out for the big event. Now that the statues have been handed out, it's time to take a better look at the fashion! Who dominated the carpet and who needed a citation from the fashion police? Wonderwall.com is rounding up the good and the bad fashion, starting with the worst look of the night, brought to us by Scarlett Johansson! The star arrived in this matronly pinstriped Michael Kors Collection combination, comprised of a suit jacket and skirt with a high slit. And is that a belt we see? We're going to need a closer look at this one! Keep reading to get a better view and see the rest of the fashionistas and flops!

RELATED: Fashion hits and misses at the 2017 CMT Music Awards

Yep, that's definitely a hideous, thick belt. Despite hating her outfit, we will give Scarlett Johansson props for her beauty look: pale shades, including a pretty pink lip, and her short hair styled in a simple wave.

A vision in white and gold! We loved Chrissy Teigen's form-fitting white gown by Pamella Roland, which featured geometric gold designs and a sharp cutout at the neckline. Next up, a better view of her hair, makeup and those jewels!

Chrissy Teigen opted for pretty, side-swept waves and rosy-hued makeup, but her accessory choice really stole the show: stunning jeweled drop earrings, which matched the colors of her dress flawlessly.

Who is dressing Anna Kendrick?! The star has delivered miss after miss on the red carpet lately, and her Tony Awards look followed suit. We're not fans of this black-and-white floral-print Miu Miu dress, or the crimson beaded bow at the base of the gown's plunging neckline.

Sarah Paulson can be counted upon to bring high fashion to any red carpet, and she didn't disappoint at the Tony Awards. The actress donned this beautiful Rodarte gown, which featured intricate detailing from top to bottom. Just as gorgeous as her dress? Those jewels! Let's take a closer look…

Though her Rodarte dress was amazing enough to stand alone, Sarah Paulson accessorized with a red Judith Leiber clutch and an eye-catching gemstone ring by Irene Neuwirth. Next we need a better view of those earrings!

Sarah Paulson sported these beautiful drop earrings, which were fashioned from the same gemstone as her ring, and were also designed by Irene Neuwirth. We loved how the stone's light hue matched her gown, and the way she brought a pop of color with that hot pink lipstick. Simply stunning, Sarah!

Orlando Bloom underwhelmed at the Tony Awards this year, opting for an ill-fitting black tux he paired with a white dress shirt and blue tie.

Get ready for a flurry of bow ties! Darren Criss looked great in a hand-tied version of the menswear staple, pairing his with a classic tuxedo.

Olivia Wilde spiced things up on the Tony Awards red carpet in this sizzling red Michael Kors Collection dress. We loved the gown's plunging neckline and wide sleeves. Next up, her beauty look!

Olivia Wilde went with rosy tones on her cheeks and around her eyes, complementing her vibrant red gown perfectly. Her slicked-back, blunt bob just elevated the look further, solidifying her as one of our favorite hits of the night!

Cynthia Nixon showed up to the Tony Awards in this beautiful pale pink Rosie Assoulin gown. While we loved the strapless cut and the hue, we weren't huge fans of her shoe choice. Red slingbacks? We know Miranda wasn't the biggest fashionista of the "Sex and the City" clique, but we expect better from a former cast member of the stylish show.

Fun with feathers! Tina Fey arrived at the Tony Awards in this sleeveless black embroidered tortoise feather gown by Sally LaPointe, and we loved the jazzy look!

Uma Thurman showed up at the Tony Awards in this dull black ensemble, made up of what looks to be a black dress shirt belted and tucked into a floor-length black skirt. The star attempted to jazz it up with a Fred Leighton necklace, but even jewels couldn't save this boring look. Next!

Bette Midler sparkled in shades of gray at the Tony Awards! The star's gown, which featured some fun, ruffled flair at the end of the sleeves, was by Michael Kors Collection.

Yawn! Sutton Foster wore this snooze-worthy look on the Tonys red carpet. The black halter dress underwhelmed among the other Broadway stars' ensembles, despite its attempt at jazzing itself up with some sparkly embroidered detailing.

Feathers had a major moment on the Tony Awards red carpet! Sally Field wore this strapless navy dress by Christian Siriano, which started out relatively boring and ended with a fun and fabulous train of navy blue feathers!

Besides bow ties, a certain color was trending for men at the 2017 Tony Awards — blue! Josh Groban showed off a tuxedo (and bow tie!) in a dark blue hue and paired it with shiny black dress shoes on the red carpet.

Broadway veteran Christine Ebersole took us back a couple decades in this shiny lavender confection created by Tony-winning costume designer William Ivey… and not necessarily in a good way. Though the off-the-shoulder ball gown was meant to evoke Elizabeth Arden, Christine's character in "War Paint," those massive, poofy sleeves and major '80s prom vibes were just too much.

Josh Gad showed up to the 2017 Tony Awards looking fashionable in a bold blue tuxedo. We liked the black accents of his lapels, bow tie and dress shoes as a contrast. Nicely done, Josh!

Andrew Rannells got the blue memo, arriving in this slim, sleek blue tux with black lapels. He added a black bow tie and black dress shoes, which got us thinking — did he call ahead and coordinate outfits with Josh Gad?

Rocking — you guessed it — a blue tuxedo and black bow tie, host Kevin Spacey arrived on the red carpet with a wave. As the host of the evening, we were disappointed by his fashion efforts. We're not fans of his attempt to rock the most popular hue of the night, mainly due to that shiny fabric and those ill-fitting pants.

Justin Guarini provided a nice reprieve from the myriad of blue suits and tuxes by showing up in a monochromatic black ensemble. Though we must admit, seeing him always makes us miss his old "American Idol" hair!

Talk about color-coordinating! Denee Benton matched the red carpet backdrop perfectly in this fun Oscar de la Renta dress. In this gown, which featured a sparkly green bodice and a white skirt with leaf detailing, the Broadway star scored a major fashion hit!

Victoria's Secret Angel Candice Swanepoel typically wows on the red carpet, but her Prabal Gurung design at the Tony Awards missed the mark. Though we loved the way this gown started — with a sparkly two-toned bodice — it lost us past the waist. Let's see that sheer, sparkly skirt from another angle…

Candice Swanepoel showed off the sheer skirt of her Prabal Gurung gown from every angle on the red carpet, and we weren't fans of the see-through look. But we did love her half-up, half-down hairdo!

Yes, Glenn Close! The actress arrived in style at the 2017 Tony Awards, looking beautiful in blue. Glenn selected this long-sleeved and lacy midnight blue dress, which also featured a knee-high slit, and we loved every minute of it!

We hold supermodels to a higher standard when it comes to fashion, and though we loved Alek Wek's asymmetrical, one-shouldered Oscar de la Renta gown, we're confused by her shoe choice! The interesting boots are up next…

Those are certainly some sparkly shoes! Though they're probably fierce on their own, we didn't love how Alek Wek paired her under-the-knee dress with these tall, jewel-embroidered boots.

Suits aren't just for the guys! Broadway and Disney princess vet Lea Salonga got in on the pantsuit action with this sleek gray selection. We loved the fun sequined detailing on the jacket, and the way she kept her makeup and accessories to a minimum for a clean, cool look.

It's never a good sign when your red carpet look draws comparisons to curtains! Broadway legend Patti LuPone's white and silver frock suffered this fate on the Tony Awards red carpet. The knee-length dress featured bizarre draping detailing on both sleeves, which fell to the floor and looked like the aforementioned home decor for a surefire fashion miss.

More like a crazy stylish ex-girlfriend! "Crazy Ex Girlfriend" star Rachel Bloom rocked this fabulous white pantsuit on the red carpet, pairing it with a black blouse underneath.

That fabric! The draping! Those silver shoes! Oh my! Allison Janney cemented herself as a miss in this unfortunate red Cristina Ottaviano one-shouldered gown.

A dress fit for a princess! Sara Bareilles arrived in this beautiful Naeem Khan gown, which featured long sleeves and shimmering green and silver details. We loved the way the Tony-nominated star kept her hair and makeup simple, opting to keep the spotlight on that gorgeous gown.

Potato sack couture? Carolyn Murphy arrived at the Tony Awards in this gray Michael Kors Collection gown, which gathered in unfortunate places and reminded us of the infamous shapeless sack.

David Oyelowo certainly looked debonair at the 2017 Tony Awards. The actor donned this gray tuxedo with black lapels — complemented by his black bow tie — and added a pop of color with a purple polka-dot pocket square. And when it came to shoe selection, David certainly didn't let us down! Get a better look at those slippers next!

David Oyelowo's ensemble was excellent from head to toe! The star finished off his look with these impossibly cool velvet slippers, complete with a crown and bee design.

We barely recognized David Hyde Pierce with that mustache! Maybe it was his attempt to go incognito in this baggy black suit?

Laura Linney brought a pop of multicolor to the red carpet at the Tony Awards. The actress rocked this strapless Derek Lam dress, which featured shades of red, orange and yellow. Extra points for matching her lip color to the pretty coral shade of the gown's belt!

This look just doesn't scream "Tony Awards" to us. "The Insider" host Keltie Knight wore this black lace, sheer Rodarte jumpsuit on the red carpet, which seemed to be a bit much for the award show.

Bold color statements were one of our favorite trends of the night! Thalia wore this fun, multicolored, long-sleeved gown, which featured geometric designs and stripes and paired perfectly with her green clutch. 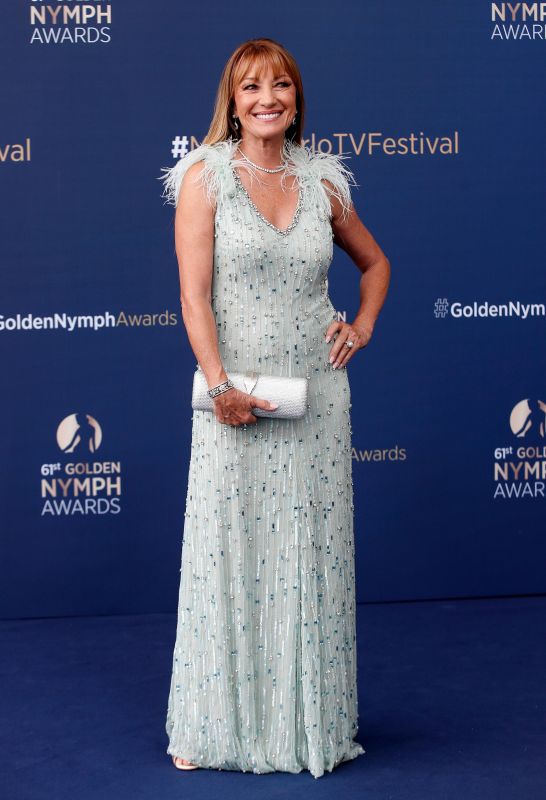