A Quick Trip Down Mammary Lane: Britney Spears stays hydrated as she does a bit of shopping during her recent concert stop in London. Not that she was in danger of drying out, at least based on the barometric reading we're getting off her overtaxed salmon tank top, which clearly indicates a cold front is moving in. Nipping at its heels: a low-pressure system that Brit could easily head off by popping into Victoria's Secret, if only she were remotely interested in keeping her pride and joy (pride is the one on the left; joy is on the right) under wraps. Spears has long answered the question "To bra or not to bra?" with a resounding, "No way, y'all!" And despite covering plenty of ground on the road to recovery, Britney has still gotta be Britney. And that means letting her Cheetos roam free. And why shouldn't she, other than potential lawsuits over accidental eye-pokings? With so much of her post-psych-ward life controlled by others, Spears undoubtedly wants to exert her independence where she can, so we all just have to make the breast of it.

Dings and Arrows: Lady Gaga, that mistress of modesty and understatement, points out the sartorial direction she's heading in courtesy of an arrow demurely positioned in her swimsuit region. There's not much we can say about the intentionally unconventional popster's latex-y spiral into the absurd, because it pretty much speaks for itself. And what's it saying? "Rubber, rubber, must dominate someone, rubber, need a whip, rubber, so much painful chafing, rubber, rubber, brrr — drafty, rubber, rubber, see-through, patterned leggings aren't pants, rubber, the trucker hat — it burns, rubber, aching ribs, rubber." Fortunately, the pouty Lady G has tucked a pair of sunglasses into her cleavage, which should protect her from being blinded by her own fierceness.

Cheer Up, Creepy Jeans: Tom Cruise and Katie Holmes dial things down at a ceremony honoring Cameron Diaz with a star on Hollywood's Walk of Fame, ditching their characteristic toothy grins and over-the-top touchy-feeliness in favor of strained smiles and a stiff, uncomfortable pose. The comb-averse, altitude-mismatched duo has also deep-sixed any delight they once took in dressing up for a photo op by opting for equally blah outfits. Katie sheathes her elongated gams in faded, ripped skinny jeans that look like they haven't been washed since Suri's first spit-up. And while the rest of her garb appears stain-free, that's not saying much. Holmes' oversized, round-bottomed T-shirt not only washes her out, but it's also sure to fuel those long-simmering pregnancy rumors. Her slouchy cardigan, meanwhile, emphasizes her posture problems, which are exacerbated by jamming her tootsies into precipitous and off-putting foot-colored pumps. As for Tom, he mirrors Katie's look with his own stature-enhancing shoes and slimfit jeans, which he wears with a casual-Friday-in-the-Foreign-Legion khaki shirt that moistly highlights his inability to raise his hand if he's Sure.

Head for the 'Hills': It's probably a stretch to expect a "Hills" cast member to form an actual thought, never mind to think twice, but that's exactly what Audrina Patridge should have done while getting ready for Canada's MuchMusic Awards. See, if she had pulled on her thinking cap before her clingy dress, she might have had a brainstorm — or even a brain-drizzle — that a black bra would work a lot better than the white coffee filters she apparently slapped atop her mountainous assets. What's more, a reasonable person would certainly have felt — in this order — confusion, doubt and disgust when confronted with something as illogical and contradictory as a short-sleeved, turtlenecked shrug. But not Audrina. No, she thoughtlessly tugged the offending garment over her ears (hey, anyone else hear the ocean?) and tried to reconcile the eternal conflict that is cleavage ventilation vs. a constrictive collar by wrapping her forearms in cashmere socks and binding her ankles in belts while her toes wiggle free.

Rimes With Hideous: Poor LeAnn Rimes. You get accused of stalking one Lifetime movie co-star and suddenly it seems like the whole world is silently judging you. "I feel like people are looking and pointing at me like I'm in a fishbowl," she sniveled to the July issue of Shape magazine. "I've learned to let it roll off my back, but it's super hard, and it really hurts." Look, LeAnn, we hate to be the ones to tell you this, but people aren't looking and pointing because of the allegations leveled by Eddie Cibrian's ticked-off wife. They're looking and pointing because you're grocery shopping in a Gymboree-sized romper covered in zigzagging lines of melted Neapolitan ice cream.

Stripped a Mickey: For all the hard-living Mickey Rourke has done over the years, he still looks pretty good (from the neck down). So it's only natural that he'd want to style clothes that showcase the sturdy shape he's in (from the neck down). And in his own inimitably seedy way, he's found the duds to do it. Or, in this case, the lack of duds, because the in-need-of-a-vigorous-scrubbing thespian obviously figures shirts are for suckers. Why make the ladies wonder about his bulging biceps and swelling pecs when he can simply put them on display in a formfitting vest? And why not just call attention to his flat abs with hip-hugging, high-gloss shiny suit pants that softly swish "fuggetaboutit" when he walks? Mickey also makes sure all eyes travel to more appealing parts south with a bright blue belt, because what dame can resist a guy who's unafraid of bold accessories (from the neck down).

Bungle Gym: There's something refreshingly wholesome about Jake Gyllenhaal and Reese Witherspoon stepping out in coordinating workout wear. Now here's a celebrity couple who's in sync, sharing a healthy lifestyle without scandal or drama. It's so sweet to see them holding hands as they stroll along … zzzzzzzz … Yikes, must have dozed off there for a minute. Where were we? Right, right, Jake and Reese — cuter than a fluffy golden retriever puppy licking a Jonas brother and a squeaky-clean antidote to the dysfunctional likes of Lindsay and Sam. We're eager to see where Gyllenspoon's peas-in-a-pod fashion sense eventually takes them, as long as it's not somewhere that sells matching shiny tracksuits and complementary fanny packs.

Pocketful of Thigh: Hollywood is trying really hard to make Ashley Tisdale happen. So far, the results have been fair to middling (her recent OK! cover story was a flop), which might be why she foxed up her look for an appearance on "Good Morning America" to promote her "new edgy rock album" (that's according to "GMA"). But the "High School Musical" starlet miscalculated just how much "edgy" inner thigh the public wants to see over their Cap'n Crunch. If we remember our Miss Manners correctly, a half-inch inseam on cutoffs turned hot pants should be worn only after dark — and preferably in the dark. On the plus side, Ashley's dangling pockets are the perfect place to stash her dignity, which she doesn't seem to be using at the moment.

Skin City: For the last several months, Melanie Brown has spent night after night surrounded by topless dancers as the minimally dressed star of the Las Vegas burlesque revue "Peepshow." With her risqué run now over, she's slowly making her way back into the land of the clothed. At her going-away party, the sometime Scary Spice takes baby steps towards decorousness in an outfit imbued with all the tasteful sophistication you'd expect from someone accustomed to performing in little more than sparkly pasties and a glittery thong. At first glance, Mel B's sheer paisley cover-up seems to be making a mockery of its name by gaping open to frame her pink Bedazzled bra, but considering the amount of spotlight time her butt cheeks and boobs received onstage, the colorful wrap is progress — and comparatively convent-ready. As for Brown's strappy, mint-green stripper shoes, those remain sinful even within the tacky confines of Sin City.

Bell Bottomed: Actresses don't come in much more adorable packages than Kristen Bell, but even her bubbly charms fizzle when faced with a poorly executed cutout dress. Strategic openings on a frock should add drama and hint of titillation, not a dash of lopsidedness, which is what her unflattering, southern-sloping chest patches produce. It doesn't help that Kristen's gravity-heavy halter, previously seen undulating on many a nubile alien girl seduced by Captain Kirk in the original "Star Trek" series, is forced to compete with a bubble skirt that bloats her super-petite bottom half (a bulbous situation made worse by her stylish by stubbiness-conjuring gladiator sandals) and an embellished waistline that looks like she didn't quite grasp that a tiara should be worn on one's head, not around one's ribcage. 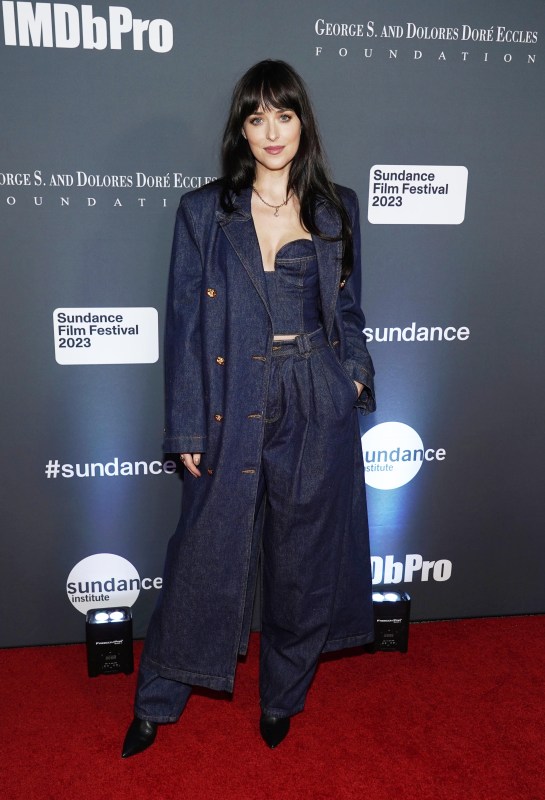