"First timer over here 😭 thank you @televisionacad for a moment I will never forget. 9 nods for team @flightattendantonmax . Thank you thank you to my entire flight crew!!!! Surreal. ✈️" –"The Flight Attendant" star Kaley Cuoco

"The one where we are incredibly grateful to the Academy for this honor and especially thankful for @mrbenwinston and his entire team for their outstanding achievement." —Courteney Cox

"I'm extremely grateful and honoured, but I should point out that I was basically carried all the way by my fellow actors  – especially Nicole [Kidman]." –Hugh Grant

"I can't quite believe this is happening. I don't know what feels greater, to be recognized for my own work or all the joy I feel for my magnificent TED LASSO family to be nominated themselves. We are a real family and to share this with them is everything. Thank you to the Television Academy. Rebecca runs through my blood stream. She is so precious to me, and this is just the icing on the cake." –Hannah Waddingham

"We might forget to hide our Starbucks cups when filming and get into trouble, but today, who cares: Congratulations to the entire QE fam, @scout.productions, @itvamerica and @netflix for doing what you do so well and have it be recognized with multiple 2021 Emmy noms. ❤️🌈 a special thanks to @televisionacad for giving us a seat at the table among so many other talented folks" –Antoni Porowski

"'It Is Absolutely Essential That I See The Queen!' Huge congratulations to my wonderful co-star and mentor Olivia Colman. It's an unbelievable honor to be nominated in this category alongside you and such other wonderfully talented actors. This nomination only exists because of Josh and all my family on The Crown. Every part of my involvement in telling this story has felt like a dream I don't want to wake up from – I'm so happy and so honored by the recognition. Thank you!" –Emma Corrin

"Just so proud of everyone involved in this show from the cast to the crew. Never had more fun. @amazonprimevideo @theboystv@televisionacad" –Chace Crawford

"WOW! @PoseOnFX's final season is an Emmy nominee!!Thank you to the @TelevisionAcad for recognizing my contribution to the TV landscape, and especially my works as a Writer & Director. This boy from the BX is forever grateful & humbled by the recognition. #PoseFX   #Emmys" –Steven Canals

"Oh WOW! What an honour to be among this incredible group of women" –Emerald Fennell

"I'm so proud of our show @queereye! We're nominated for Outstanding Host of a Reality or Competition Show for the 2nd time and the Queer Eye team is nominated for 5 more awards including Outstanding Structured Reality Series for the 4th time in a row 🤯🥳🤩 It's so moving and surreal to be recognized in this way and I'm just so so honored. Thanks so much @queereye @netflix@televisionacad @itvamerica@scout.productions" –Jonathan Van Ness

"So #grateful. Thank you @televisionacad Thank you @poseonfx. Thank you @fxnetworks. I SEE YOU MICHAELA JAE!!!" –Billy Porter

"Thank you @televisionacad for this incredible honor! Congrats to @nbcthisis. Got nominated for an Emmy, y'all!!!!" –Sterling K. Brown

"Wow. Trip. Big love to all the Ham fam, specifically nominated and otherwise. How crazy is it that we got to make a thing that continues to resonate with people so much? Does this mean we get to hang out again soon?" –Daveed Diggs

"I'm completely shocked and overwhelmed to be nominated for both SNL and Shrill. I immediately thought of the cast, writers, and crew of both shows who helped me at every turn this year. With Shrill ending, this feels particularly meaningful to me, and to celebrate, I will pace around my apartment for the rest of the day." –Aidy Bryant

"Twelve, TWELVE #Emmy nominations for @Bridgerton!!!! Thank you @TelevisionAcad what an incredible honour!! Also @netflix please can I have the day off work to go I'm great at a party" –Nicola Coughlan

"Thank you to the Television Academy – what lovely company to be in. We can't wait to take selfies with everyone. And congrats to the entire This Is Usfamily. You made one of my favorite seasons during an impossible time and I'm crazy about all of you." –Dan Fogelman

"On behalf of the Drag Race family, we are beyond grateful to the Television Academy for recognizing the love and passion that we poured into every frame of season 13. We couldn't do what we do without the unwavering support of ViacomCBS and World of Wonder. I have the distinct pleasure of working with the most creative and dedicated cast and crew in television. But the success of Drag Race starts and ends with our amazing queens. It's their tenacity, creativity and vulnerability that tells queer kids everywhere that they are loved and worthy of celebration." –RuPaul

"Wooohooo!!! Dancing around in my undies!" –Zach Braff

"We(Fab 5) were nominated for an Emmy for Outstanding Host & the show in 5 other categories! Thank you so much! And shout out to @mjrodriguez7 ! Congrats!!" –Karamo Brown

"I am in complete shock but feel incredibly humbled and am so grateful for this nomination! I'm tremendously thankful that the show and my amazing cast members were recognized for our work and Misha Green's fearless storytelling. I feel like I'm living my ancestors wildest dreams. It's such an honor." –Jurnee Smollett

"What fantastic news to wake up to this morning! I'm deeply honoured to have been nominated for what was a dream role for me, and I'm thrilled for all of my WANDAVISION family for the love they received from the academy. And then to see UNCLE FRANK get recognised as well makes this the happiest of mornings." –Paul Bettany

"I'm very thankful to the Television Academy for this acknowledgment! Reverberations from Lin-Manuel's masterpiece continue to surprise and delight those of us that were lucky enough to be in the original company. So grateful for the support the film has received from audiences and the team at Disney+. What a morning!" –Leslie Odom, Jr.

"Thank you to the Television Academy. We are all pinching ourselves that after four series, The Crown is still being embraced and enjoyed in this way. Behind the scenes, this show has an immense, dedicated and incredibly hardworking crew of world-class talent. So, these nominations are gratefully received in recognition of all their outstanding work which continues to inspire me every day." –Peter Morgan

"It's never lost on any of us at The Voice that getting an Emmy nomination is such an incredible honor. We have so many talented, hardworking people who make this show so special. Top to bottom, the best in the business for almost 500 episodes. We appreciate their hard work getting the highest recognition a television show can receive. On behalf of our superstar coaches, our entire cast and crew, and the most talented singers in the world, we'd like to thank the Academy for this nomination. We'd also like to recognize the other inspiring shows we've been lucky enough to get nominated alongside. Thank you!" —Carson Daly

"I'm so overwhelmed by this, especially given what it's for. To be nominated amongst not only peers, but friends, is a dream come true. More than anything, it feels like a true celebration of the legacy of Aretha Franklin. I thank the Television Academy for honoring the Queen of Soul." –Cynthia Erivo

"Huge congrats to my loves on our second Emmy nomination for best host plus @queereye got 5 additional nominations! I love you all! We couldn't do it without our amazing crew and network, @netflix. Thank you @televisionacad for your continued love and support. #emmys" –Bobby Berk

"I AM SCREAMMMMING!!! @BlackLadySketch earned FIVE EMMY NOMINATIONS! I am so proud!" –Robin Thede

"I've never undertaken something quite like our limited series The Underground Railroad but in the process of making it, a lesson I learned as a pupil revealed itself to be viciously true: a director is nothing without their cast, their crew; without the network of hundreds it takes to make a vision like this a dream realized and true," he said in a statement. "It's for that reason I want to thank the Television Academy, on behalf of every soul who ever appeared at the bottom or top of any call sheet in our 116 days of shooting, for the recognition of this show alongside the exemplary nominees in the limited series category. It is always "an honor to be nominated." Today I hope that phrase will serve as a celebration of the wonderful crew that gave this show its fuel and the selfless cast on whose wings it took flight."  –Barry Jenkins

"Thank you to the members of the TV Academy for the six nominations!" Lorre said. "The past three seasons of The Kominsky Method have been an experience of a lifetime and it's a great honor to finish out on such a high note. I want to congratulate Michael Douglas, Paul Reiser and Morgan Freeman for their well-deserved acting nominations. Thank you to Netflix, Warner Bros. and everyone on the show that worked so hard to make The Kominsky Method. Congrats to Yuri Reese, Sean Madsen and Brian Wittle for their Sound Mixing nomination and Nikki Valko, Ken Miller and Tara Treacy for their Casting nomination." –Chuck Lorre

"I'm absolutely blown away to receive an Emmy nomination," she said. "I enjoyed every minute of filming Ratched and I got to work with some of the most generous and exciting actors around. Enormous thanks and gratitude to everyone who made this nomination possible." –Sophie Okonedo

"Oh wow this is nuts. Thank you so much, @TelevisionAcad @nbcsnl!" –Dan Levy 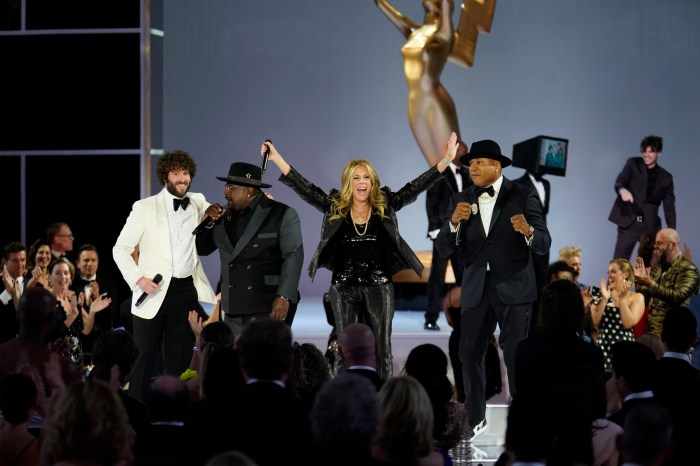