With the 77th Golden Globe Awards airing on Jan. 5, 2020, Wonderwall.com is taking a look back at the most surprising winners in recent years, starting with Kate Winslet. The British star was shocked to take home not one but two Golden Globes on Jan. 11, 2009. She earned her first award for best supporting actress in "The Reader" and her second for best actress in "Revolutionary Road." Kate was stunned as she headed to the podium to claim her second trophy of the night. "Is this really happening?" she asked in an emotional address. She even apologized to her fellow nominees! Keep reading for more Golden Globe Awards surprises…

In 2019, Lady Gaga was the frontrunner for best actress in a drama thanks to her critically acclaimed performance in "A Star is Born." So when the winner was announced, viewers were stunned to learn veteran actress Glenn Close was the woman taking home the trophy. Glenn, who won for her work in "The Wife," seemed as shocked as everyone else to hear her name called. It's her third Golden Globe statuette to date.

RELATED: Golden Globes fashion: The most buzz-worthy looks of yesteryear

The audience was surprised to see Amy Poehler not only host the 2014 award show but win her first Golden Globe that same night — and she did not see the win (for best actress in a TV comedy) coming. While Amy was comfortable hosting with her pal Tina Fey, after being awarded the trophy for her performance as Leslie Knope on "Parks and Recreation," she was downright flabbergasted. "I've never won anything like this!" she exclaimed.

It was a shock: A raunchy flick about an epic bachelor party in Las Vegas won the Golden Globe for best movie musical or comedy at the 2010 Golden Globe Awards, surprisingly beating out not one but two Meryl Streep movies, "Julie & Julia" and "It's Complicated," as well as "(500) Days of Summer" and "Nine." "The Hangover" was not predicted to win and when director Todd Phillips and the cast went up to accept the award, the first words out of his mouth were, "Oh my God, we didn't expect this." You weren't the only one, Todd!

Jennifer Lawrence took home the trophy for best supporting actress for her performance in "American Hustle" at the 2014 Golden Globes. But her win came as a surprise because Jennifer had some fierce competition with Sally Hawkins, Lupita Nyong'o, Julia Roberts and June Squibb nominated in the same category. Lupita had been predicted to win for her work in "12 Years a Slave," and Julia was also favored for her performance in "August: Osage County." It's no wonder that J.Law was trembling when she accepted the trophy. "I don't know why it's so terrifying," she told the crowd. "I don't know why I'm so scared. It's obviously a good thing… I'm sorry I'm shaking so much! Don't ever do this again. It's so scary."

When Brad Pitt won the Golden Globe Award for best supporting actor for his performance in "12 Monkeys" in 1996, he surprisingly beat out actors including the heavily favored Ed Harris in "Apollo 13" and Kevin Spacey in "The Usual Suspects." Brad was sweating onstage as he spit out the words, "Oh, no!" then humorously thanked the makers of Kaopectate before expressing his gratitude to the Hollywood Foreign Press for "this moment of absolute terror."

Olivia Colman's 2017 Golden Globe win was such a surprise, she wasn't even there to accept the award! The British actress was nominated for her performance in "The Night Manager" but was convinced she wasn't going to win. She ultimately decided not to attend, instead choosing to stay in London, where she was starting a new movie, "Murder on the Orient Express." "It was a gamble not to go but I thought, 'I bet I don't win,'" she explained to BBC News. "I can't believe I was not there but it feels like the wrong thing not being there for the first week of a new job."

When Andy Samberg scored a nomination for his work on "Brooklyn Nine-Nine," it was a huge surprise, as the show had only been on the air for a couple of months at the time. But when he actually won the 2014 Golden Globe for best actor in a TV comedy, he couldn't hide his shock: He'd beat out Jason Bateman, Jim Parsons, Don Cheadle and Michael J. Fox. "Oh, no! I didn't prepare anything. It wasn't going to happen," Andy said. "Who knew?!" On "Chelsea Lately," he further spoke about his unexpected win. "I was genuinely surprised," he said, "because I didn't deserve it."

At the 2015 Golden Globes, Joanne Froggatt won the award for best supporting actress in a series, miniseries or TV movie for her performance on "Downton Abbey." She beat out amazing competition including Uzo Aduba, Kathy Bates, Michelle Monaghan and Allison Janney. "This is the most shocking moment of my life," Joanne said when she got onstage.

Tracee Ellis Ross was in for the surprise of her life when she took home the award for best actress in a comedy series at the 2017 Golden Globes. Tracee was the first black woman to win in the category since Debbie Allen in 1983 and the first black nominee in the field since Debbie and Nell Carter were nominated in 1984. The "Black-ish" star made sure to dedicate her award to women of color, saying, "This is for all the women of color and colorful people whose stories, ideas, and thoughts are not always considered worthy and valid and important. But I want you to know that I see you. We see you."

The only three-way tie in Golden Globes history happened at the 1989 ceremony when Jodie Foster ("The Accused"), Shirley MacLaine ("Madame Sousatzka") and Sigourney Weaver ("Gorillas in the Mist") all won the prize for best actress in a dramatic motion picture. "I guess I start," Jodie said with a laugh as she kicked off the acceptance speeches.

Billy Bob Thornton's 2015 Golden Globe Award win for best actor in a miniseries or TV movie for his work in "Fargo" came as a shock as Matthew McConaughey had been widely predicted to win for his performance in "True Detective." It was Billy's first Globe, and he didn't know how to accept the unexpected win. "These days you get into a lot of trouble no matter what you say … I know this for a fact, so I'm just going to say thank you," he said.

Ruth Wilson took home the 2015 Golden Globe Award for best TV actress in a drama for her work in "The Affair." Her win was not expected because her competition was pretty steep, with some of Hollywood's power actresses — Claire Danes, Viola Davis, Julianna Margulies and Robin Wright — nominated in the same category. It was apparent that Ruth did not think she would win when she accepted the award. "Wow. Thank you. I am very amazed," she said.

No, Matt LeBlanc did not win a Golden Globe Award for his performance as Joey Tribbiani on "Friends." But he did win an award at the 2012 Golden Globes for best actor in a TV comedy for his work on "Episodes." While speaking to ABC News afterward, even he called the win "bizarre."

Fans were surprised when the Wes Anderson-directed film "The Grand Budapest Hotel" won the award for best comedy or musical at the 2015 Golden Globes, beating out the favorite of the night, "Birdman" starring Michael Keaton.

When Madonna won a 2012 Golden Globe in the best original song category for her track "Masterpiece" from her film "W.E.," it came as a surprise because Elton John was her competition and had been widely expected to win for his song "Hello, Hello" from the animated feature "Gnomeo and Juliet." "I hope he speaks to me," Madonna told ABC News backstage at the Golden Globes. "He's known to get mad at me, [but] he'll win another award. I don't feel bad." To be fair, Madonna wasn't expecting it either. "This is a surprise," she told the room while clutching her award.

Renee Zellweger's 2001 Golden Globe win was a huge surprise: She wasn't even in the room when her category — best actress in a musical or comedy — was announced. It was only after Hugh Grant (her co-star in 2001's "Bridget Jones's Diary") started accepting the honor on Renee's behalf (she won for her performance in "Nurse Betty") that she rushed to the stage and admitted she was taking lipstick off her teeth in the bathroom when her name was called. "Oh, God, thank you so much!" she exclaimed. "What an amazing thing!"

Gina Rodriguez was a relatively unknown actress on The CW, a network that had never before received any nominations, when she won the best actress in a TV comedy award at the 2015 Golden Globes. Gina, a rising star, beat out the likes of Julia Louis-Dreyfus and Taylor Schilling for the trophy. "My father used to tell me to say every morning, 'Today is going to be a great day. I can and I will,'" she said during her emotional acceptance speech. "Well, Dad, today is a great day. I can and I did."

Isabelle Huppert was gleefully shocked when she won the best actress award for her performance in the French-language film "Elle" at the 2017 Golden Globes. It is incredibly rare for an actor to be nominated for a foreign language film, and even rarer for one to win — especially when up against the favorite of the night, Natalie Portman. "Thank you to people for the people from all over the world here in this room," Isabelle said during her acceptance speech. "From China, to the Arabic world, from America and Europe, don't expect cinema to set up walls and borders."

Michael Caine was not expected to win at the Golden Globe Awards in 1999. His fellow nominees (in the best actor in a musical or comedy movie category) included Antonio Banderas for "The Mask of Zorro," Warren Beatty for "Bulworth," John Travolta for "Primary Colors" and Robin Williams for "Patch Adams." Yet Michael prevailed with his performance in "Little Voice." "What a shock," he said, and the audience could not help but laugh.

When Ving Rhames won the Golden Globe for best actor in a miniseries or TV film for his performance in "Don King: Only in America," he gave it away to acting legend Jack Lemmon, who was nominated in the same category for his work in "12 Angry Men." Ving handed Jack the award and said, "I feel that being an artist is about giving," he continued, "and I'd like to give this to you, Mr. Jack Lemmon." Jack accepted it and told Ving, "That is one of the nicest, sweetest moments I've ever known in my life." Talk about a surprised winner! 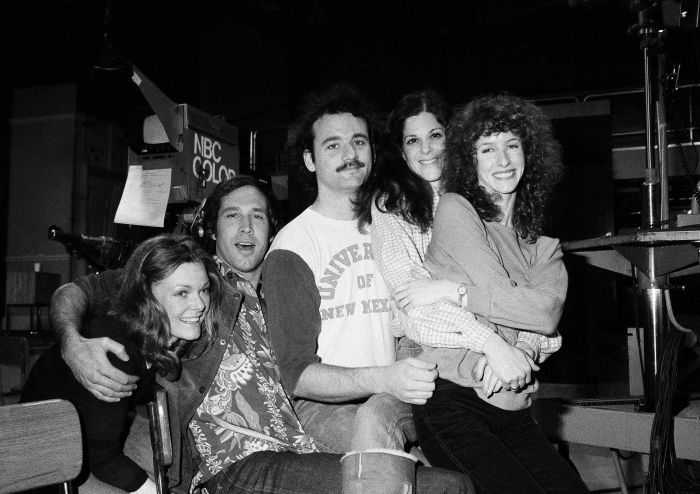 Up Next 'SNL' start