That was quick. After deactivating her Instagram last week, Britney Spears returned to the platform on Sept. 20. "I couldn't stay away from the gram too long so I'm back already 💍😂!!!!" she admitted in the post, which featured a pair of photos she said were taken in Palm Springs, Calif. Britney's Insta-break kicked off just seven days ago, shortly after she and Sam Asghari got engaged. At the time, she told fans she was "just taking a little break from social media to celebrate my engagement" and promised she'd return "soon." TMZ, however reported that insiders close to the star were worried about the content of some of her posts, particularly since her next conservatorship hearing is coming up on Sept. 29. Britney, however, seems to be doing just fine: Hours after her Instagram return, she posted two more videos of herself dancing to Billie Eilish and Lenny Kravitz songs, telling fans in the caption for the latter, "this is me after vacuuming my living room with this bomb 💣 new glade Hawaiian 🌺 breeze carpet cleaner !!!!! Holy hell it's great …. my living room smells 👌👌👌 so nice to WAKE UP to !!!!!"

"Bridgerton" star Rege-Jean Page arrived at the 2021 Emmy Awards on Sept. 19 with someone other than his longtime girlfriend, Emily Brown, on his arm — but not because the two have split. In fact, the Daily Mail recently reported the two bought a home together in London last year, and Rege simply opted to bring along close friend and former costar Menik Gooneratne as his date. The Sri Lankan-Australian actress and writer appeared with Rege in Peter Jackson's 2018 film, "Mortal Engines," and the two have apparently remained pals. As for the erstwhile Duke of Hastings' Emmy nod — he was up for best lead actor in a drama series — Rege lost to Josh Charles for his performance in "The Crown." The Netflix hit snagged all four major acting awards as well as best drama.

RELATED: Fashion hits and misses from the 2021 Emmy Awards

Ben Affleck is "in awe" of Jennifer Lopez as the couple's on-again romance continues to bloom. The multi-hyphenate singer, actress and entrepreneur, 52, recently announced plans to "elevate and support Latina entrepreneurs" through her Limitless Labs project and a partnership with Goldman Sachs' 10,000 Small Businesses program — and it's clearly just one of many reasons Ben, 49, finds Jen so inspiring. "All I can tell you is that I have seen firsthand the difference representation makes because I have seen, over and over and over and over, women of color approach Jennifer and tell her what her example as a strong woman and a woman succeeding and demanding her fair share in the business world means to them," Ben says in a new interview with Adweek, which features Jennifer as its 2021 "Brand Visionary" cover star. "I am in awe of what Jennifer's effect on the world is," Ben continues. "At most, as an artist, I can make movies that move people. Jennifer has inspired a massive group of people to feel they have a seat at the table in this country. That is an effect few people throughout history have had, one I will never know and one I can only stand by and admire with respect." Jen, who has three new films in the hopper for the coming year and hopes to get back to touring soon, tells Adweek that a "big part of" her "second act" will be "empowering women to create their most beautiful life." In the meantime, she and Ben, who began dating again this year after getting engaged back in 2003 and splitting the following year, are now said to be "figuring out their future together."

When Chrissy Teigen lost her son, Jack, mid-pregnancy, last year, her candid posts about the experience were hailed for helping to shine a light on something that's rarely discussed, despite being relatively common. On Sept. 19, the model and cookbook author opened up about another aspect of pregnancy loss — how her body feels "stuck" one year later. "It's really weird when you lose a baby and your body gets paused in time. usually you'd gain your 'yumyums I'm praaaagnant!' weight, then put on the weight of your little bebe," she wrote, in part, on Instagram. "Then, ideally, you'd have your baby. And you would feed it from your boobs and your body would know to charge through and do what it does to get you back into fighting shape, whatever that may be, for however long it takes … But man. When you lose a baby halfway through, your body just pauses," Chrissy continued. "It has nothing to do. No one to feed. And you're just … stuck." She went on to describe how she still has her "saggy" chest that was "prepping to" give milk to a child and "a belly that was ready to bake," telling followers that in addition to being "extremely, diabolically sad at what could have been … you have this daily reminder every time you look in the g—— mirror." In conclusion, she admitted she had no "big ending or positive words" to share, asking only that anyone who reads the post "say nice things." Chrissy and her husband, John Legend, lost their son after she was hospitalized because of excessive bleeding. They share two children, Luna, 5, and Miles, 3.

Craig Melvin, Savannah Guthrie and Hoda Kotb's week had an interesting — if less than ideal — start to their week when a streaker in nothing but a Speedo ran past the window of their street-level, New York City studio on Sept. 20. To viewers at home, the man was partially covered from the waist, down by the barricades positioned outside while the show was filming. But the anchors may have seen a little more than they cared to, sparking Savannah to turn to the window and yell, "Where are your clothes? Oh my gosh, what is happening?" as Hoda, who never stopped smiling, and Craig, who seemed ready to burst out laughing, urged the guy to put something. Technicians managed to cut away to an ad in just a few seconds, although the commercial they ran opened, rather awkwardly, with the word "dignity."

Christina Haack and Joshua Hall are engaged! The "Christina on the Coast" star announced her happy news on Sept. 20, letting three Instagram photos and a handful of emojis say it all. The mini-gallery included two photos featuring Christina's new sparkler and one image of the couple sharing a kiss, while the caption showed the emojis for a heart, an infinity sign, a lock, a key and a ring. A ring now appears in Christina's Instagram bio as well, which reads, "Mommy. 💍 Josh Hall." The reality star and her realtor beau have been in Mexico celebrating Josh's birthday, which Christina marked with a sweet Instagram message that read, in part, "You give me that teenage kinda love vibe and manly protection. It's a combo for a lifetime of happiness + success. Thank you for reminding me what life and love are like when you put down the technology. I love you Josh." Christina and Josh began dating this past spring. The mother of three was previously married to Tarek El Moussa from 2009 to 2018 and Ant Anstead from 2018 until 2021.

The U.K.'s royal family expanded by one new addition over the weekend. On Sept. 18, Princess Beatrice and her husband, Edoardo Mapelli Mozzi, welcomed their first child together — a girl. "So delighted to share the news of the safe arrival of our daughter on Saturday 18th September 2021, at 23.42, at the Chelsea and Westminster Hospital, London," the new mom tweeted the day after her little one's birth. "Thank you to the Midwife team and everyone at the hospital for their wonderful care." A statement from Buckingham Palace added, "The new baby's grandparents and great-grandparents have all been informed and are delighted with the news … Her Royal Highness and her child are both doing well …" According to People, Beatrice and Edoardo's daughter will likely inherit a "nobile donna," or "noble lady" title from her father, who is descended from the Italian aristocracy. As Queen Elizabeth II's 12 great-grandchild, she won't inherit a British title, since her mother does not have one. Edoardo is also a dad to a son, Christopher, from a previous relationship.

Food Network star Buddy Valestro's hand is almost 95 percent healed from the horrific and potentially career-ending home bowling alley accident he suffered one year ago. Speaking to Rachael Ray on the Sept. 20 edition of her show, the celebrity baker marveled at the fact that he's able to do things like decorate the three-tier cake he was beautifying while catching viewers up on his recovery. "You know, it's definitely been an amazing ride and, you know, the fact that I'm able to still do what I love," said the "Buddy vs. Duff" star. After the accident last September — in which a metal rod repeatedly impaled his right hand as he was attempting to restart the pinsetter in his home bowling alley — Buddy, 44, credited his teenage son, Buddy Jr., and brother Marco with getting him safely out of the machine's way. He's since undergone five surgeries. 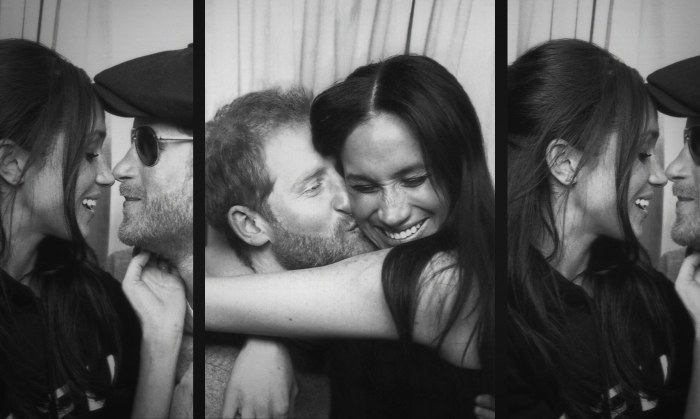