Brad Pitt and Sienna Miller 'have been spending time together'

Those Brad Pitt and Sienna Miller romance rumors may not have been off-base after all. While a source told Us it wasn't true that the pair was "stroking each other and holding hands" at Glastonbury last month, the insider confirmed Brad and Sienna were "hanging out" together at the festival and have been " been spending some time together" recently. Brad "has been on a couple of dates," since splitting from Angelina Jolie, according to a source. "He's hanging out with friends and those friends are bringing him out to meet other people." Sienna, who starred in Brad's "Lost City of Z," "would make a great couple" with the newly single star, said the source.

Taylor Swift was MIA over the Fourth of July holiday

Not even her love of a good Fourth of July party can tempt Taylor Swift back into the Instagram spotlight these days. One year after pals like Blake Lively, Karlie Kloss and Cara Delevingne joined Taylor at her home in Rhode Island to celebrate Independence Day, Taylor's house — and Instagram account — remained quiet this week, even as her parents were spotted in town. Various outlets have ascribed the singer's sudden disappearance from social media and public life in general as being related to her rumored work on a new album and romance with actor Joe Alwyn. Speaking to E! News in June, a source said, "Taylor has been doing her own thing and has not been in any exclusive relationship for some time since her last boyfriend. She has been working on new music and spending quiet time with her family and friends." The insider also noted Taylor's experience dating Tom Hiddleston changed her approach to love. "She got buried in media being on top of her life during the last relationship, so she tried everything in her power to not have that happen again," said the source. "She worked very closely with her security team and management to make sure her life going forward was private. All of that madness really affected her."

A French court has delayed judgment on the trial over photos taken of Duchess Kate sans bikini top in France in 2012. According to the Evening Standard, the verdict was due on Tuesday, July 4. But the court decided to postpone the hearing until September. The photos were published in Closer magazine and a newspaper called La Provence in September 2012, leaving the chief executive of publishing group Mondadori Ernesto Mauri, along with La Provence's then- publishing director Marc Auburtin, Closer editor Laurence Pieau and photographers Cyril Moreau, Dominique Jacovides and Valerie Suau, at risk of being held liable for charges including invasion of privacy.

Dennis Quaid and Santa Auzina are giving the old "age is just a number" adage a little more power. The 63-year-old actor and 31-year-old model spent the holiday weekend celebrating their first anniversary, according to posts on social media. The pair shared photos from their trip to Canada's Whistler ski resort, captioning pics of snow-topped mountains and rolling hills with loving sentiments about their milestone. "We made it first year anniversary," Santa wrote in one post. In another, she shared the definition of the word "soulmate," along with a hashtag for their anniversary. Congrats!

If you saw this face behind the counter at a McDonald's drive-through, would you ask him out? It seems lots of girls would — and did — when James Franco was working at Mickey Dee's way back when. "I was in acting class, and I would practice different accents in the drive-thru, like really bad accents," he recalls in the new issue of W (via JustJared). "But people believed me. So I'd be like [in terrible Italian-American accent] 'Hey, welcome to McDonald's. May I help you?' You know, like, that bad. And I'd always know that they were interested 'cause they'd come back around. So, you know, a young lady would be like, 'Oh, I forgot the, uh, strawberry milkshake.' She'd come back and she'd be like, 'Well, I'm trying to learn Italian. Maybe you could give me some Italian lessons.' I'd go [in accent], 'Yeah, yeah, sure.' But then there were a couple, I guess, with my Irish accent or, like, my Brooklyn accent—those I could go out on dates with. You know, we went to see 'Titanic,' and I had to keep it up. You know, so like [in equally bad Brooklyn accent], 'Whoa, Leonardo. Wow, he was amazing. Yo, oh.'" Eventually, however, the ladies would figure out James was not their ideal Italian teacher or Brooklyn tour guide. "Then I always had to break it to 'em, 'cause they'd call me, and it was before cell phones," he recalls. "So I'd pick up the phone, I didn't know who it was. And I'd be like [in regular voice], 'Hello?' And they'd be like, 'James, is that you? What happened to your accent?' It was always the worst, as if I was this huge imposter. Like, I had to come clean: 'Hey, I'm not from Brooklyn. I'm from Palo Alto.' And they just look at me like I'm a complete stranger. And it usually ended right there."

Seems like Fred Savage's "Friends from College" co-stars aren't likely to end up as his friends in real life. The New York Post recently checked in with multiple stars from the Netflix show and they all said the former "Wonder Years" star cuts his ties with the cast as soon as the workday is over. "Good old Kevin Arnold," said Keegan-Michael Key. "As lovely and delightful as he is, has a very strict policy of not hanging out with his cast members." When the director yelled, 'Cut! We're wrapped' … he goes back to his hotel room and watches prime time television all night. Not a bad policy." Billy Eichner told the tab a similar story. "He really creates boundaries. He's like, 'Nope, I've had enough of you,'" he said. Added Nat Faxon, "He basically said, 'We'll be friends on-set, and when we wrap I will no longer be your friend,' and he was not kidding. I made it my purpose all season to get him to hang out with me because he's such a fantastic, lovely hilarious guy … I succeeded, twice." Nat also suggested Fred has his reasons:"He's such a pro and has been in the business longer than anybody, so he's like, 'I'm going to do my thing, and then go home.' "

Drew Carey has a new lady. TMZ reports "The Price is Right" host is dating sex therapist Dr. Amie Nicole Harwick, who, in addition to helping clients deal with sex issues and writing the book "The New Sex Bible for Women," previously worked on the live touring version of "The Price is Right" as a model. (Gold star for that creative career path, Amie.) Drew and Aime reportedly met at a house party about a month ago.

Speaking of intersections between politics and pop culture … does the world need more Leslie Knope in 2017? In a new interview with THR, "Parks and Recreation" co-creator Michael Schur says Amy Poehler's comedic character gave us optimism when it was on TV from 2009 through 2015. "[Local government employees] have said that her hopeful vision of government was helpful in times of crisis," Michael said. "There's an aspirational quality to Leslie … She offers a kind of blueprint for how we might go about curing certain problems in government." He added that "TV tells stories and reflects the time in which we live," which, as Vulture points out, could explain why Leslie's hopeful vision is no longer on the air.

Six years ago, Donald Trump turned down Lindsay Lohan as a possible contestant on "Celebrity Apprentice," citing her need to get "straightened out" before they could work together. Now, Lindsay's all about defending the Donald. On July 4 on Twitter, LiLo posted multiple messages urging Americans to give their president a little love. "@hrtablaze @realDonaldTrump @IvankaTrump @FLOTUS @DonaldJTrumpJr are kind people. As An American, why speak poorly of anyone? #FAITH #July4th," she wrote. In another tweet, she added, "@LeahR77 @CNN THIS IS our president. Stop #bullying him & start trusting him. Thank you personally for supporting #THEUSA." Lest we forget, the 45th president is the same guy who told Howard Stern in 2004 that Lindsay was "probably deeply troubled and therefore great in bed."

Bad jokes have a way of sticking around. Just ask Kathy Griffin, whose gory photo of what looked like her holding Donald Trump's disembodied, bloody head, has reportedly led to an investigation of the comic. On Monday, July 3, political reporter Yashar Ali tweeted, "Kathy Griffin has been interviewed by the Secret Service, in-person, for over an hour," adding, "….investigation still not closed" (via Vulture). Kathy, meanwhile, seems frustrated by the entire thing. "Hey… TMZ and [TMZ founder] Harvey Levin," she tweeted at the website she once accused of being excessively pro-Trump. "May you NEVER [be] under fed investigation like I am now." 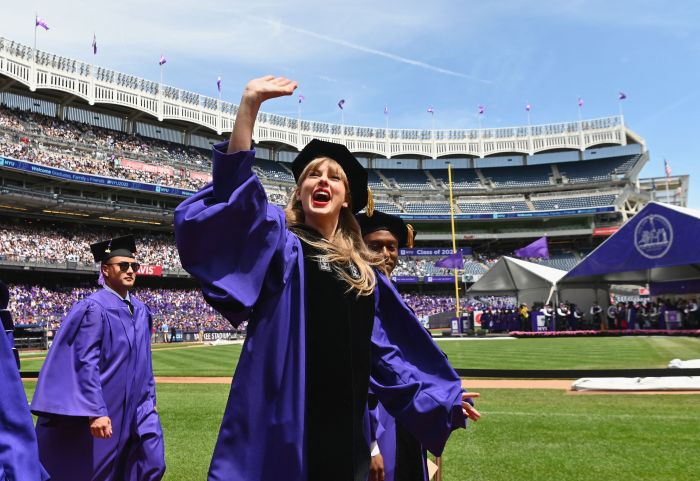 Up Next Smarty pants