Wonderwall.com is taking a look back at the biggest celebrity love life stories of December 2017, starting with the latest from Prince Harry and Meghan Markle, who made their first official appearance as a working couple at the Terrence Higgins Trust's World AIDS Day Charity Fair at the Nottingham Contemporary in England on Dec. 1 following their November engagement announcement. Almost two weeks later on Dec. 12, Kensington Palace announced that the royal family will be making a major break from tradition this year: The "Suits" actress will spend Christmas Day with Harry and her future in-laws at Sandringham, Queen Elizabeth II's private estate. It'll be the first time anyone who's not already married into the family will join the queen for the holidays. (Duchess Kate was not invited to celebrate Christmas 2010 at Sandringham with then-fiance Prince William — even though they were set to tie the knot just four months later.) According to The Daily Mail columnist Richard Kay, the move "represents a sea change in the Victorian attitudes which for so long have colored the royal approach to modern life." (According to a Dec. 3 report in The Telegraph, Meghan and Harry will also buck tradition by serving banana cake at their May 2018 wedding rather than traditional British wedding cake, which has a top layer made of fruit cake that lasts long enough to be served at the christening of a couple's firstborn child.) In addition to the World AIDS Day event, the retired actress also joined her intended, as well as his grandmother and other members of the royal family, at the Royal Household Christmas party — where she spent time getting to know the staff of her future in-laws' various residences — at Windsor Castle in mid-December. Now keep reading for more of the month's biggest celeb love life news…

Kaley Cuoco took to Instagram on her 32nd birthday, Nov. 30, to share the happy news that she'd gotten engaged. The star of "The Big Bang Theory" posted a video of herself overcome with emotion just moments after her boyfriend of two years, Karl Cook, popped the question. "We're engaged," she said while looking into his camera phone. "Still crying 💍 every part of this night has been perfection just like you @mrtankcook I love you forever!" she wrote in the caption.

The rumor mill desperately attempted to make a power couple of Brad Pitt and Jennifer Lawrence this month. "Brad has had his eye on Jennifer for years," Star magazine quoted a source saying as part of a dubious cover story published on Dec. 13. "[They] have been enjoying lots of late nights together. There's an intense connection between them!" The source told the tabloid that the A-list actor reached out to J.Law after getting her number from a mutual friend. (As much as we would LOVE this rumor to materialize, sadly, several reliable media outlets have already thrown cold water on the report.)

It's getting serious for Taylor Swift and Joe Alwyn: The duo are now allowing themselves to be seen in public together. First they were photographed sharing a ride and holding hands following Z100's Jingle Ball in New York City on Dec. 8. Then fans saw them dancing together in the VIP section during Capital FM's Jingle Bell Ball in London on Dec. 10. And finally, People reported on Dec. 13 that the pair, who were first outed as a couple in May, plan to spend Christmas together. After that, "Joe will travel with her as much as possible" during her 2018 "Reputation" tour, a source told the magazine.

Dakota Johnson and Chris Martin are "more than just a fling," a source told Us Weekly in a report published on Dec. 12. The duo — who have been spotted together several times in recent months — were seen dining with singer Nick Cave and taking in his concert in Israel in November. "Dakota and Chris are definitely dating," the source said. "They've gotten to know each other really well and are very comfortable [with] one another. Chris sends Dakota his music to get her opinion."

In Touch reported on Dec. 6 that Halle Berry and music producer Alex Da Kid have called it quits after five months of coupledom. "Halle broke up with Alex smack in the middle of their romantic getaway in Bora Bora," a source told the tabloid. "Halle decided he was too young and his communication skills were terrible. She said she needs someone who can think for themselves and is mature, smart and all-around adventurous."

After two years of making people wonder if the rumors were true, Taraji P. Henson finally confirmed that she and former NFL cornerback Kelvin Hayden are an item. "I'm not the type to blast my personal business. But, you know, I think that's important for people to know. I'm happy. I'm very, very happy. I just am," the "Empire" actress said during an interview on Essence's "Yes, Girl!" podcast in mid-December. Taraji and Kelvin were first linked in December 2015.

Oscar Isaac raised questions about his relationship with Elvira Lind when he referred to her as his wife (while sporting what appeared to be a wedding band) in a BuzzFeed video published on Dec. 14. Two days earlier, the Danish director donned some eyebrow-raising bling (a ring that also looked like a wedding band) during the London premiere of "Star Wars: The Last Jedi." The duo welcomed a son, Eugene, in April. They've yet to confirm that they've tied the knot.

Liev Schreiber, 50, and former Miss South Dakota Taylor Neisen, 26, were spotted together for the second time in recent months, fueling rumors that they're more than friends. According to Page Six, the duo attended a performance of "The Losers Lounge Tribute to Burt Bacharach" at Joe's Pub in New York City on Dec. 8. "They seemed tentative with each other, and not all over each other. They left together after intermission," a source told Page Six. The actor and the beauty queen were first linked by the New York Daily News in October after they were photographed getting ice cream together. At the time, Liev's rep claimed that he and Taylor "are friends and she sometimes helps out with the kids — they are not dating." But a lot can change in two months!

That was fast! The Blast reported on Dec. 5 that Naya Rivera filed to divorce Ryan Dorsey for the second time following a Thanksgiving altercation that concluded with the "Glee" star in cuffs for misdemeanor domestic battery. The actress cited irreconcilable differences as the reason for the breakup and listed Nov. 24, the day before the domestic violence dispute, as the date of separation. Naya first filed to divorce the father of her son, Josey, in November 2016 but withdrew the petition in October 2017.

"Hot Felon" model Jeremy Meeks and girlfriend Chloe Green raised eyebrows when the Topshop heiress donned a massive sparkler on THAT finger during an outing in Beverly Hills on Dec. 15. The duo have yet to confirm they've gotten engaged, though the ex-con — who's currently in the process of divorcing his first wife, Melissa — recently said that he's "never been happier" than he is with the socialite.

Richard Gere also made us wonder if he'd gotten engaged when his girlfriend of more than three years was spotted wearing what appeared to be an engagement ring on multiple occasions in December. The 68-year-old actor and the 34-year-old Spanish socialite have been an item since 2014.

Robert Pattinson has been spotted with a mystery blonde in the wake of his breakup from FKA Twigs. The "Twilight" actor was seen holding hands with a special someone during Seth MacFarlane's annual holiday party in Los Angeles on Dec. 9. "They were together all night," a spy told Us Weekly. 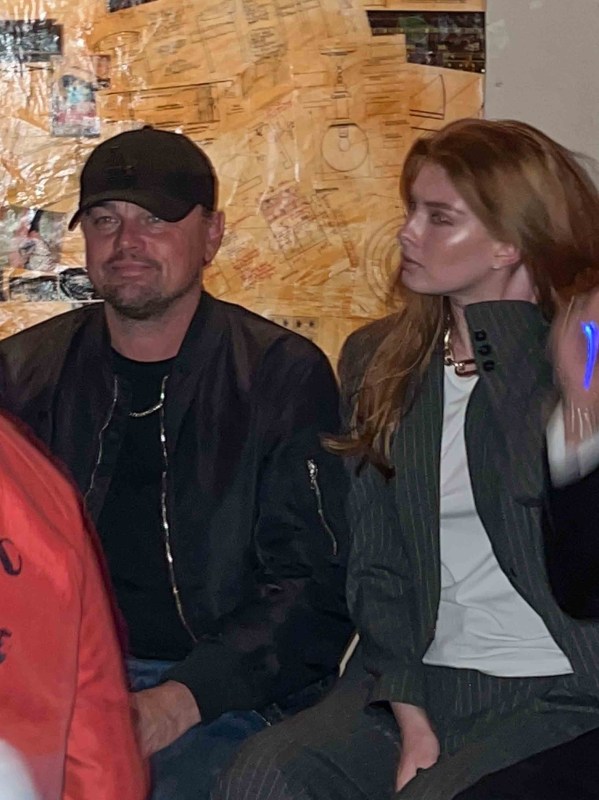 Up Next Leo's Ladies