Kim Kardashian West is open to having four kids

Are Kim Kardashian West and Kanye West already thinking about having a fourth baby? In her new cover story for Elle, Kim reveals her maximum number (kid-wise) is four, leaving the door open for one more sibling to join her family's growing brood. "I don't think I could handle more than that," she tells the magazine. "My time is spread really thin. And I think it's important that in all couples, the mom give the husband as much attention as the kids." Kim and Kanye welcomed their third child, Chicago, via gestational carrier earlier this year. And as she admits to Elle, it was painful not to carry the baby herself, despite warnings that her preeclampsia and placenta accreta conditions could be fatal for both her and a fetus. "I hated being pregnant. But as much as I hated it, I still wished I could have done it on my own," Kim says. "The control is hard at the beginning. Once you let that go, it's the best experience. I would recommend surrogacy for anybody."

"Silly rumors." That's how Kris Jenner describes social media chatter suggesting Kylie Jenner's ex, Tyga, actually fathered Kylie's daughter, Stormi, rather than her current boyfriend, Travis Scott. Speaking to the hosts of Australian radio show "The Kyle and Jackie O Show," who pointed out that "Tyga was chiming in saying maybe it was his baby," Kris dismissed the notion. "Oh no, no no. I think that was just a bunch of silly rumors as usual," she said, according to E! News. "Yeah, you guys know better than that," she added. As for the multitude of babies arriving in the Kardashian-Jenner family lately, Kris gushed, "It is such an exciting time. It really is. So many blessings and so many grandchildren." Shortly before Stormi was born, Kim Kardashian West and Kanye West welcomed their daughter, Chicago. Khloe Kardashian, meanwhile, is due any day now.

What would Oprah Winfrey like to say to Donald Trump?

Oprah Winfrey is not in the business of wasting her time, a fact to which her multi-billion-dollar fortune can attest. That might explain her reaction to a question on "The Van Jones Show" on Sunday, March 11, about what she would say to Donald Trump if she had 10 minutes alone with him. Oprah, of course, has been urged by fans to stage a bid for the White House. Although she's been pretty clear about assuring the world that's not her plan, it didn't stop the president from telling a group of supporters in Philadelphia that he could beat Oprah in an election "because I know her weakness." (As Celebitchy helpfully reminds us, "Dude, Oprah's weakness is bread.") So what would Oprah say to the president? Perhaps nothing. Said O: "I would only speak if I felt that I could be heard."

When she accepted the award for Best Actress in a Leading Role at the Oscars this year, Frances McDormand challenged her peers to adopt more inclusion riders as a means of ensuring that new projects include members of marginalized groups including women, people of color and members of the LGBQT community, among others. This week, Ben Affleck and Matt Damon's production company, Pearl Street, became the second powerful force in the movie industry to accept that challenge. In a nod to Michael B. Jordan's recent promise to begin using inclusion riders for projects coming out of his Outlier Society production company, Pearl Street's Fanshen Cox DiGiovanni tweeted that Matt and Ben's group will follow suit. "@michaelb4jordan Thank you for always supporting broader representation in the industry," she tweeted (via E! News). "On behalf of Pearl Street Films, Matt Damon, @benaffleck, Jennifer Todd, Drew Vinton & I will be adopting the #InclusionRider for all of our projects moving forward." The announcement comes after both Matt and Ben were criticized amid Harvey Weinstein's sexual misconduct scandal. In interviews, Matt declared that "there's a difference between patting someone on the butt and rape or child molestation" and the two "shouldn't be conflated," and implied the men who have not sexually harassed or assaulted anyone deserved more appreciation. Ben, meanwhile, faced backlash for groping Hilarie Burton on "TRL" in 2003. Both actors have since apologized.

Sharon Stone thinks James Franco's sexual misconduct allegations are getting out of hand. For one thing, she says there's been no "due process" for James in the wake of claims by four film students that he sexually exploited them while filming various scenes with them. (He has apologized for making the women uncomfortable, while his reps have denied various aspects of the women's stories. The Times also rounded up about a dozen other film students who said their experience with James at Studio 4 was positive.) "I'm appalled with what's happening with [Franco]," Sharon, who appeared in Franco's "The Disaster Artist" told Marc Maron in a recent edition of his "WTF" podcast, according to the New York Post. Stone also raised the question of slippery boundaries when it comes to sex between two people who are romantically involved. Violet Paley has alleged James forced her to perform oral sex. From Stone's perspective, however, Paley was Franco's' "girlfriend" at the time. Stone described Franco as being "the loveliest, kindest, sweetest, most elegant, nicest" person and questioned Paley's read of whatever happened between her and James, suggesting that sometimes guys are just, well, dumb and clumsy. "You go out with them, they bring you home for a good-night kiss and they grab your hand and put it on their penis," she said. "I don't think they're trying to sexually harass me, I think they're just incredibly stupid and awkward."

Move over, "Life of Pablo." Kanye West's got a new project underway. Social media posts over the past weeks indicate Kanye's been working on new music in Jackson Hole, Wyoming — and he's getting help from some friends. According to TMZ, Kylie Jenner's boyfriend — and Stormi Webster's dad — Travis Scott joined Yeezy for what appears to have been a songwriting hang. Producer Pi'erre Bourne and New York City's A$AP Bari, who founded and handles creative needs for the rap collective A$AP Mob, were there as well, along with producers The Dream and Jeff Bhasker and rapper King Louis. Kanye reportedly started making trips to Jackson Hole to work on the new album last year.

Selena Gomez is getting ready to debut a new collection as part of her ongoing collaborative work with Coach. This fall, the singer's set to launch the Coach x Selena Gomez lifestyle collection, JustJared reports. The line will feature a ready-to-wear collection, designed by Selena and Coach Creative Director Stuart Vevers. Pieces in the line are set to include outerwear, handbags, leather products and accessories created with Selena's "confident and powerful feminine spirit," according to a press release.

Mohamed Hadid has filed a lawsuit against Miranda Vee in the wake of her claim he raped her. Vee went public with her allegation in an Instagram post in which she first accused Guess co-founder Paul Marciano of sexually harassing her. She went on to say Paul "passed" her on to Gigi Hadid and Bella Hadid's dad, whom she claims "date raped me in an an apartment" during what she was led to believe was going to be a business meeting. In Hadid's suit, the real estate developer claims the meeting with Vee was consensual — but turned out to be what he believes was part of a plan to extort him for money, according to TMZ. A source told the website Vee threatened to go public with her claim but eventually signed a nondisclosure agreement. Hadid vehemently denied that detail and called Vee a "pathological liar." He's suing for "defamation, intentional infliction of emotional distress and civil extortion," according to TMZ.

With Bill Cosby's criminal retrial just a few weeks away from beginning, a new filing from one of his accusers could get in the way of his defense team's plans. A model named Chloe Gains, who sued Cosby in 2015 on grounds he gave her a date rape drug after they met at the Playboy Mansion in 2008, has asked a judge to prevent Cosby's lawyers from deposing Janice Dickinson, Miranda Nix, Colleen Hughes and Chelan Lasha ahead of his retrial start date. According to The Blast, her filing states that deposing the women would be in violation of a court order intended to prevent both sides from getting more information intended to help their cases. She wants the depositions to be pushed back until after his criminal trial is over. Cosby has reportedly opposed the motion. In the criminal retrial, now slated to begin in April, the comedian faces three counts of aggravated sexual assault related to his interaction with Andrea Constand.

Why Amy Schumer isn't changing her last name after wedding

Amy Schumer's Feb. 13 trip down the aisle with Chris Fischer will not result in a name change for the comic. In a recent Instagram story excerpted by Us Weekly, Amy's dad, Gordon, wonders aloud, "Are you still Amy Schumer or are you Amy Fischer now?" Amy, looking aghast, tells her dad, "I'm not Amy Fischer! Do you remember who Amy Fisher is? The Long Island Lolita. No, I'm keeping my last name. I'm keeping your last name." The so-called Long Island Lolita, Amy Fischer, infamously shot the wife of her then-lover, Joey Buttafuoco, when Amy was just 17 in 1992. The wife, Mary Jo, survived and Amy ended up going to prison. Um, yeah. Schumer sounds like a good choice… 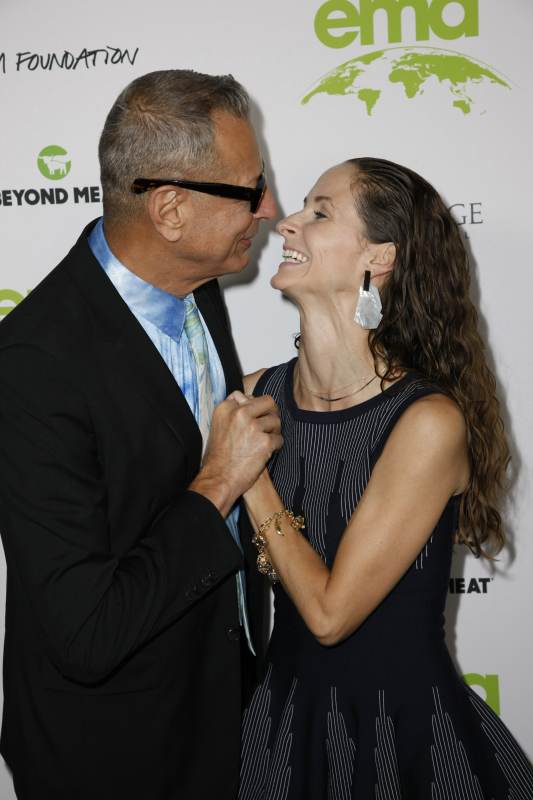