"Wow! So thrilled about the #Emmy Nominations for #BigLittleLies! The cast & crew worked so hard to make this happen! Thanks to all the fans!"–Reese Witherspoon

"We knew what the outcome of the voting would be as we met with a Russian lawyer some time ago."–Keri Russell and Matthew Rhys

"Maaaaan, I got the best job on TV! Receiving this nomination is just the cherry on top. Thank you, Television Academy! From network to studio, cast to crew, writers, producers & directors–each and every one of you are second to none! Thank you all for making this the experience of a lifetime! Dan Fogelman…you are a cherub faced, literary assassin! I look forward to working with you for the rest of my life! Ryan, Andrew, & Amaré…you are my everything. Namaste."– Sterling K. Brown

"When we started on this journey we never thought the series would connect on such a big way worldwide. I have never experienced anything like it and as producers and actors we all bow down to the Academy with thanks!" —Nicole Kidman

"Well I'm in a little bit of shock!! 13 nominations is absolutely insane. I woke up to a gif from my publicist Erica of a shirtless Anthony Rizzo from the Cubs and knew it was good news (because a shirtless Rizzo is always good news) but 13 is blowing my mind! I'm so intensely proud of my cast and crew who put their blood, sweat and tears (literally) into this show. This is not a solo sport and each and every one of them is responsible for helping make something we could be proud of. And a special shout out to my executive producing partners, showrunner Bruce Miller and EP Warren Littlefield. Our triangle of collaboration and trust has been a gift to me and I love you both. " — Elisabeth Moss

"I am so honored to be included in this extraordinary group of women. And I am very grateful to Robert, Tina, and all of our cast and crew who make my job so pleasant. Go Russia! I mean, go USA!"– Ellie Kemper

"Thx 2 @TelevisionAcad 4 our 17 noms 4 @VeepHBO. We welcome any info Russian govt has on any of our opponents & r avail 4 meetings. #veep" —Julia Louis-Dreyfus

"In a year of such great television it's a privilege to be nominated and having seen my fellow nominees work just to be in their company is winning enough. Couldn't be happier for me and the show."–Benedict Cumberbatch

"I feel very, very honored and also a bit all-of-a-fluster. I've never been before and I can't wait." — Claire Foy told Entertainment Weekly

"Thank you. Bette would be happy and so am I."–Susan Sarandon

"I'm very grateful to be a part of 'The Handmaid's Tale.' It's amazing company of actors and the incredible group of artists who bring this story to life. It has already been a true honor to be entrusted with playing Ofglen; a character and inspiration originated by Margaret Atwood and so beautifully crafted by Bruce Miller. It has been a high point for me creatively to be led by Reed Morano's skillful and intuitively transportive direction, while acting alongside the utterly brilliant Elisabeth Moss. For 'Handmaid's' to now receive this much recognition, it's humbling, yet I'm so proud, and really excited for everyone."–Alexis Bledel

"The day I read John Wells' pilot for SHAMELESS I knew I was in for a wild ride, and here we are eight years later and I'm still playing Frank Gallagher, whom I love so much I'd give him my liver. Not only do I get to go to the Emmys to see all my pals, I'll do it with Felicity Huffman on my arm."– William H. Macy

"I am so thrilled to be nominated for playing Dolores; she is the bravest and most complex character I have portrayed. It is an honor to be a part of the cast of Westworld, it really is the best job I've ever had." —Evan Rachel Wood

"It is most gratifying that the Television Academy has chosen to honor 'Wizard of Lies' in so many categories. It was truly a collaborative effort to bring this production to fruition. I am proud to be a part of it." — Robert De Niro

"Tanks to @TelevisionAcad for amplifying the issues in @13THFilm via 8 Emmy nods. Art in action is a powerful thing." –Ava DuVernay

"Ahhhh! Only in my dreams could I have imagined this. Thank you to the Television Academy for the incredible amount of love and support they have shown me and our show this morning. I have so much fun playing Eleven, and am forever grateful to The Duffers, Shawn Levy and Netflix for allowing me the opportunity to become her. This is an unbelievable honor, and I can't wait to dance the night away with the cast and Stranger Things team!"–Millie Bobby Brown

"I'm continuously blown away by our show's talent in front of and behind the camera, and this season is no exception. It's truly an honor to be recognized alongside such an incredible cast and crew. Thank you to the Academy, thank you to our UKS family, and thank you Beyoncé." –Titus Burgess

"I can't believe that @ModernFam has been invited to the @TheEmmys for the 8th year in a row! Truly humbled. Congrats to all the nominees!" — Jesse Tyler Ferguson

"So elated that after so many seasons the Television Academy has again nominated Top Chef! Congrats to all my cast and crew and our brilliant producers for the best show there is to work on. Feeling much gratitude this morning! Congrats also to RuPaul's Drag Race which is much loved on our set too!"–Padma Lakshmi

"I am still in shock and so much joy. I received my 2nd #EmmyNomination this morning. This means so much to me. My own personal struggles have been real and many. Those of other trans women are real and many particularly those who are incarcerated and suffering abuse in correctional facilities and solitary confinement like my character Sophia did in this now Emmy nominated episode.#JusticeforEryricka. Congratulations to all my fellow nominees. Special shout outs to my #OITNB Castmates @uzoadubaand @whododatlikedat who is celebrating her first and long overdue nomination for #handmaidstale. So proud of you both. Love you all. Can you believe I am nominated in the same category as #CicelyTyson!!. Holy crap! I am going to go cry again.#Emmys. #TransIsBeautiful" —Laverne Cox

"Thank you Television Academy!! I am so happy for team Stranger Things! And I am so proud to be a part of this amazing show. What an honor." –Noah Schnapp

"Thank you Television Academy! We're two days from STS1's first anniversary and what an amazing present for the show to be nominated for an Emmy!! Congrats to all our writers, our directors and producers, all our amazing crew and, of course, all my castmates. Huge shout out to Matt and Ross Duffer – you brought an audience together from almost every country on earth, and you've changed the lives of everyone connected with this show forever. Love you! Thanks to my family and team for all the support – you're the best! And congrats to Millie and David for their nominations. One of the best parts about this ride is the chance to work together every day. You make us bring our "A" games and we love you for it. See you on Sept. 17th!"–Finn Wolfhard

"Thank you Academy Members for this! I love bringing Jimmy Mcgill/Saul to life. As written by Peter Gould and Vince Gilligan and the staff, he's a complex, compromised, and funny fella – he's got everything going' on! It is the part of a lifetime, and I'm glad it's working so well for so many people. I'm thrilled to be included in this great group of actors and I am so happy that the Academy appreciates the hard work and high standards of everyone making Better Call Saul. Congrats to Jonathan Banks as well. Jonathan Banks delivers again and again, he is the consummate pro, and he's funny and don't believe the hype – he's a sweetheart, too. The best. We are all giving it everything we got, glad you like it!"–Bob Odenkirk

"It's truly an honor to be nominated and I can't thank the voters and supporters of 'Veep' enough. Maybe now my daughter won't try to walk 10 feet in front of me. But who am I kidding!"–Tony Hale

"Many thanks to the Television Academy members for the nominations. @nbcsnl @matchgameabc."–Alec Baldwin

"The horse is almost as thrilled as I am! #Emmys nom! This is what he is whispering: 'Tell that f—— Frank Gallagher that I am your date!'"–Felicity Huffman

"I'm absolutely thrilled to have been nominated for a third time. Five seasons in, I still feel privileged and excited to work with the incredible cast and crew on 'House of Cards.' I'm humbled and honored, and the nominations for Robin, Kevin, and the show make this even more special."–Michael Kelly

"What is happening?! It's so nuts! I'm going to have to change my iPhone description from now on I got up early because I was going to keep it real and had zero expectations for this day. I was in a Pop Physique class this morning! It's an exercise class so I was working on buns from 8:30 to 9:30 and came out to a gazillion messages. I got a lot of vague 'woohoo!' texts so I had to try and figure out what was happening. I was flipping out, covered in sweat and now I'm on my way to a doctor's appointment. It's so crazy! I have to go call Rabbi Susan Goldberg who walked me through this whole journey. I definitely want to share this with her. I couldn't have done it without her." –Kathryn Hahn told The Hollywood Reporter

"My @TheEmmys nomination celebration. Airport security. It's really glamorous, kids. Thank you @TheEmmys for the nomination. It is very special to me. And @Stranger_Things with 18 nominations, my pride in the show, unending" — David Harbour 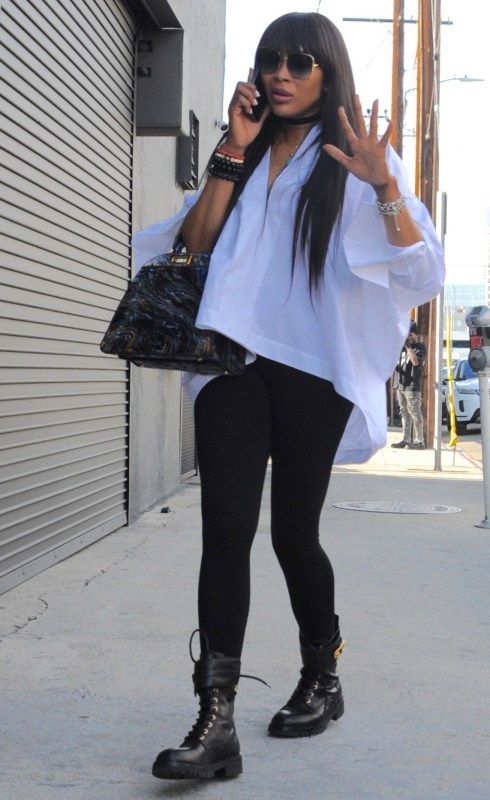