Wonderwall.com is taking a look back at the best nostalgia-inducing photos of Leo, our favorite child star-turned-leading man, starting with this one: Many of us first became fans of Leonardo DiCaprio when he landed the role of Luke Brower, a homeless teenager in need of a family, on "Growing Pains" in 1991. Leo, who was nearly 17 when this picture was taken, was on the show for two seasons before it was ultimately canceled, leading him to bigger and better Hollywood roles.

Keep reading to see more memorable pics from Leonardo's past…

RELATED: All the ladies Leonardo DiCaprio has romanced over the years

In 1990, a nearly 16-year-old Leonardo DiCaprio appeared on the short-lived sitcom "Parenthood" as Garry Buckman, who's based on the same character that Joaquin Phoenix played in the film version of "Parenthood" the year before.

In this Feb. 27, 2005, pic, a 31-year-old Leonardo DiCaprio is seen with one of his most famous girlfriends, supermodel Gisele Bundchen, at the 77th Annual Academy Awards. The couple dated from 2000 to 2005 (making it one of Leo's longest relationships ever) but not long after this picture was taken, Gisele parted ways with the notorious playboy, later explaining that she was on a road to self-improvement while Leo wanted to stay the same.

Can you get any more nostalgic than this? In this adorable July 1975 picture, Leonardo DiCaprio is just 8 months old but already posing for the camera with a sweet smile. The picture was taken in Leo's parents' Hollywood home a few months before they divorced. Lucky for Leo, his folks remained committed to co-parenting and decided to live next door to each other so he could always have them both in his life.

In this Jan. 22, 1994, picture, Leonardo DiCaprio is seen with his favorite person in the world — mom Irmelin Indenbirken. Leo, who was 19 at the time, brought his mom to the Golden Globe Awards that year when he was nominated for best actor in a supporting role for his performance in "What's Eating Gilbert Grape?"

Leo, is that you?! Leonardo DiCaprio — seen here at a TJ Martell music event in September 1989 — captured the essence of late '80s fashion. He was just 14 in this pic.

No matter how bad we want it to be true, Leonardo DiCaprio and his "Romeo + Juliet" co-star Claire Danes likely didn't hook up on the set of their 1996 film, especially since Leo was famously dating model Kristen Zang at the time. However, they did take this adorable pic together at the Sept. 7, 1996, premiere of their movie in Los Angeles.

There is something so tender about this picture of 19-year-old Leonardo DiCaprio hugging his "What's Eating Gilbert Grape" co-star Darlene Cates at the Dec. 12, 1993, premiere of their film in Los Angeles. In the movie, Darlene played Momma to Leo's character, Arnie — a young boy with special needs. For his performance, Leo earned his first of several Oscar nominations.

It's hard not to smile from ear to ear when you're on one of the most beautiful beaches in the world. In this 1999 picture, a 24-year-old Leonardo DiCaprio is seen grinning on set of his 2000 film "The Beach." The movie was largely filmed on Maya Bay, a pristine turquoise cove on Thailand's Phi Phi Leh Island that's been closed to tourists since 2018 due to conservation efforts.

Can you believe Leonardo DiCaprio was almost 20 in this May 1994 picture? The actor was goofing around with co-star James Madio on the set of their 1995 film "The Basketball Diaries."

Look at these two winners! At the 62nd Annual Golden Globe Awards in January 2005, Leonardo DiCaprio (who took home a best actor award for his work in "The Aviator") and Hilary Swank (who earned a best actress accolade for her performance in "Million Dollar Baby") posed for photos together in the pressroom.

Just one week after celebrating his 23rd birthday, Leonardo DiCaprio rubbed elbows with royalty at the Nov. 18, 1997, premiere of "Titanic" in London. In this picture, Leo is seen bowing as he shakes hands with Britain's future king, Prince Charles. In the background, you can also see Leo's co-stars Billy Zane and Frances Fisher enjoying their royal meet-and-greet.

Well, hello there, Leonardo DiCaprio! In this March 20, 1998, picture, Leo is seen posing against a vivid pink background while entering the royal film premiere of "Man in the Iron Mask" in London. Is it just us or was 1998 the year Leo went from looking like a preteen to instead looking like a major Hollywood hottie?

Leonardo DiCaprio is seen here alongside co-star Johnny Depp as they arrived at the Los Angeles premiere of their film "What's Eating Gilbert Grape" in December 1993.

Despite arriving together at the Jan. 18, 1998, Golden Globe Awards, Leonardo DiCaprio and "Titanic" co-star Kate Winslet were never an item. Instead, the two formed an intense friendship that has continued for more than two decades. Fun fact: Kate is almost a year younger than Leo. In this pic, he was 23 and she was just 22.

Nine years later, Kate Winslet and Leonardo DiCaprio were seen hugging and smiling together at the Vanity Fair Oscar party in Los Angeles on Feb. 25, 2007. The two had recently wrapped their 2008 drama "Revolutionary Road." A little more than five years after this sweet picture was taken, Leo reportedly walked Kate down the aisle when she married Edward Abel Smith (formerly known as Ned Rocknroll) in 2012.

We're digging Leonardo DiCaprio's rose colored glasses at the March 28, 1997, UK premiere of "Romeo + Juliet." The 22-year-old really liked those shades, as he was seen wearing them again at a Versace fashion show the same month.

Do you recognize the major Hollywood star standing beside Leonardo DiCaprio in this Nov. 11, 1993, picture? It was none other than Mark Wahlberg, who, at the time, still went by his hip-hop moniker, Marky Mark. The two — who became fast friends while filming their 1995 movie "The Basketball Diaries — were celebrating Leo's 19th birthday in Los Angeles.

In February 1994, Leonardo DiCaprio and a young Gwyneth Paltrow posed for photographs together at the 65th Annual National Board of Review of Motion Pictures Awards in New York City.

Following the Sept. 11, 2001, terror attacks, Leonardo DiCaprio and his "This Boy's Life" co-star Robert De Niro joined forces at the Concert For New York at Madison Square Garden on Oct. 20, 2001. Leo, Bob and many other celebrities were in attendance that night to pay tribute to the first responders who risked their lives to save others amidst the attacks on our nation.

In this 1999 picture, a 24-year-old Leonardo DiCaprio and his bestie, actor Kevin Connolly, are seen gearing up to ride a roller coaster at Six Flags Magic Mountain near Los Angeles. The actors — who became close friends after being cast in the movie "Don's Plum" — were attending a celebrity event at the theme park to raise money for the British charity Comic Relief.

A family affair! While Leonardo DiCaprio has long had a reputation as a lady's man, he's also a doting son and grandson! At the 52nd Cannes Film Festival in May 1999, Leo posed for photos alongside his mother, Irmelin Indenbirken, and his grandmother, Helene Indenbirken.

Leonardo DiCaprio, Steven Spielberg and Tom Hanks posed together at the Jan. 26, 2003, Berlin premiere of their Oscar-nominated biopic "Catch Me If You Can," a film about an FBI agent's hunt for a criminal forger who cashed millions of dollars in fake checks while pretending to be a doctor, a prosecutor and a Pan-Am pilot.

It's practically a tragedy that Cameron Diaz and Leonardo DiCaprio never actually dated. The two made a stunning pair, however, at the 2002 Los Angeles premiere of their Oscar-nominated film "Gangs of New York." Fun fact: Cameron — who was 30 in this pic — is just two years older than Leo.

In 1995, Leonardo DiCaprio was young and looking to have some fun. In this Nov. 2 picture, which was taken just nine days before his 21st birthday, Leo and longtime friends David Blaine and Lukas Haas were clowning around in New York City. The trio were members of the infamous "P**** Posse" (later renamed the "Wolf Pack") and were notorious for causing mayhem in and around the Big Apple.

What makes this rather stoic 2002 photo of filmmaker Martin Scorsese and Leonardo DiCaprio so special is that it was taken near the start of what's been a long relationship between the two Hollywood powerhouses. The men were in Japan for the premiere of the first film they worked on together, "Gangs of New York." The duo would go on to make six more movies together including the yet-to-be-released "Killers of the Flower Moon" and "Roosevelt." In 2012, Marty — a notoriously tough director — spoke about his admiration for Leo, explaining, "We speak the same language."

The short-lived relationship between Leonardo DiCaprio and model Bridget Hall might not have been his most important, but we can't get over how adorable they looked in this 1994 pic. Leo — who was 19 at the time — was riding high on his "What's Eating Gilbert Grape?" fame and filming his next movie, "The Basketball Diaries," when he and Bridget linked up for a whirlwind romance.

Rocking a freshly grown goatee, Leonardo DiCaprio gave photographers a coy smile in this Feb. 12, 2000, pic. The actor was at the Berlin premiere of his movie "The Beach," a film about a young man and his friends who find a mysterious hidden paradise and must learn to survive with the criminals who already call it home.

Despite looking like a freshly minted 14-year-old, Leonardo DiCaprio was actually two months shy of turning 18 in this Sept. 19, 1992, picture. The young actor had just wrapped up his time on "Growing Pains" and was participating in MTV's Rock N' Jock Basketball tournament in Irvine, California.

It may have only been taken a few years ago, but we still get nostalgic when we see this major moment in Leonardo DiCaprio's life. On Feb. 28, 2016, Leo finally won his first Oscar — after six nominations — for his performance in the biographical adventure "The Revenant." The win was, by many accounts, long overdue, given the quality of Leo's many films and performances over the years. During his acceptance speech, Leo thanked his parents and his friends before speaking out about a cause near and dear to his heart: climate change. "It is the most urgent threat facing our entire species, and we need to work collectively together and stop procrastinating. We need to support leaders around the world who do not speak for the big polluters, but who speak for all of humanity, for the indigenous people of the world, for the billions and billions of underprivileged people out there who would be most affected by this," he told the audience. 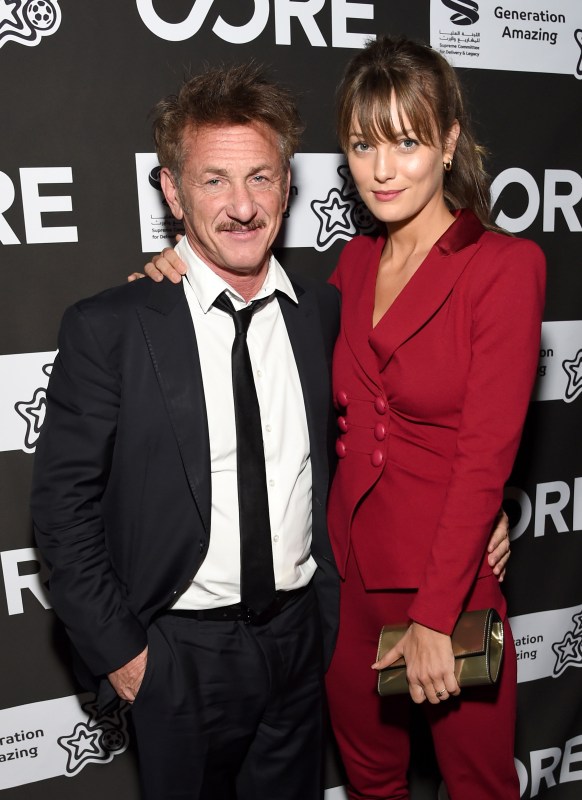