Happy birthday, Megan Fox! To celebrate the stunning star's 34th birthday on May 16, 2020, Wonderwall.com is taking a look back at her life in photos. Keep reading to take a trip down memory lane…

Oak Ridge, Tennessee, native Megan Fox fell in love with the world of drama and dance at a young age. She landed her first acting role at 15 — as Brianna Wallace in "Holiday in the Sun," a film starring the Olsen twins. But it wasn't until 2003 that she scored a steady acting gig on the ABC sitcom "Hope and Faith." She played Sydney Shanowski (pictured) on seasons 2 and 3 of the show before its cancellation.

In 2003, Megan Fox had her first public relationship with a fellow actor. That year, she stepped out with David Gallagher, who was best known for his role on "7th Heaven" at the time. The two dated from 2003 until 2004.

Time for the big screen! Megan Fox starred in 2004's "Confessions of a Teenage Drama Queen" opposite one of the biggest young stars of the era — Lindsay Lohan. She played Carla Santini, Lindsay's character's rival, in the flick.

She looked so young! Megan Fox sported curly dyed black hair and her natural freckles when she attended the "Confessions of a Teenage Drama Queen" premiere in New York City in February 2004 when she was just 17.

Megan Fox got her big break in 2007 when she landed the role of Mikaela Banes in "Transformers." The blockbuster made her a household name and earned her an MTV Movie Award nomination for best breakthrough performance.

2008's "How to Lose Friends & Alienate People" saw Megan Fox playing a small role in a British comedy. Not only did it not perform well at the box office — it also received poor reviews. Fun fact: Megan's real-life fiancé, Brian Austin Green, had a cameo in the flick.

Megan Fox attended her very first Golden Globe Awards in January 2009. She was a presenter that night.

It's over… for now. Brian Austin Green and Megan Fox ended their engagement in February 2009. But it wouldn't be the end for this couple!

In 2009, Megan Fox reprised her role as Mikaela Banes in the next "Transformers" installment, "Transformers: Revenge of the Fallen." Though she was set to star in the third flick, "Transformers: Dark of the Moon," she had a massive falling out with director Michael Bay and ended up dropping out of the successful franchise.

At the 2009 Teen Choice Awards, Megan Fox went home with a coveted prize — choice female hottie. She also picked up the surfboard for choice summer movie actress for her work in "Transformers: Revenge of the Fallen."

Post-"Transformers," Megan Fox snagged her next big role — the lead in Diablo Cody's 2009 supernatural horror-dark comedy "Jennifer's Body." Though the quirky film bombed at the box office and scored mixed reviews upon its release, it's since become a cult classic touted as a feminist horror flick.

Wedding bells rang for Megan Fox and Brian Austin Green in 2010. The couple got engaged again that June and tied the knot that very same month in Maui. They're seen here at Milan Fashion Week a few months after becoming husband and wife.

"Jonah Hex" was Megan Fox's next flick. She starred opposite Josh Brolin in the 2010 film, which was unfortunately a huge flop with audiences and critics alike. This marked two disappointing box office bombs in a row.

Megan Fox picked up another choice female hottie surfboard at the Teen Choice Awards in 2010. She also scored a win in the choice horror/thriller movie actress category for her work in "Jennifer's Body."

The streak of box office bombs continued with Megan Fox's other 2010 film, "Passion Play." She starred opposite Mickey Rourke in the movie, which debuted at the Toronto Film Festival to such terrible reviews that it secured a straight-to-video release.

For years, Megan Fox was known for her many tattoos, especially a large portrait of Marilyn Monroe she had inked on her right forearm as a teen. In February 2012, she appeared on "The Tonight Show With Jay Leno" and she spoke about her decision to start having some of her art — starting with Marilyn — removed via laser treatments. She told the comedian that when she was 19, everyone warned her that the day would come when she wouldn't like her tattoos anymore. "I was stubborn and I thought that I would love it forever, or that it would be like a book of my life, all the things that I loved when I was younger," she shared. "And it's not that at all."

In December 2012, Megan Fox was on hand to announce the nominations for the 2013 Golden Globes. Though she'd given birth just three months earlier, she was also busy doing promotion for her latest flick — "This Is 40." She had a small role in the Judd Apatow film opposite Paul Rudd and Leslie Mann.

Despite their past rife with bad blood, Megan Fox reunited with filmmaker Michael Bay to make 2014's "Teenage Mutant Ninja Turtles." She played April in the beloved kids franchise, a performance that earned her her first Golden Raspberry Award for worst supporting actress.

Brian Austin Green joined Megan Fox at the Berlin premiere of her film "Teenage Mutant Ninja Turtles" in October 2014. Less than a year later in August 2015, she filed for divorce. But within months, something changed the situation…

By early 2016, Megan Fox and Brian Austin Green were back on! The news came to light that spring after Megan attended CinemaCon in Las Vegas with a prominent baby bump, though neither would confirm they were back together at first.

"Teenage Mutant Ninja Turtles: Out of the Shadows" hit theaters in 2016, with Megan Fox reprising her starring role as April in the flick.

Journey River arrived in August 2016 — a year after Megan Fox filed to divorce Brian Austin Green. The actress is seen out and about in Los Angeles just a month before giving birth to her third son.

A move to the small screen! Despite being known as a movie star, Megan Fox made the move to TV in 2016 and 2017, filling in for Zooey Deschanel on "New Girl" during Zooey's maternity leave . Megan played Reagan on the popular FOX sitcom.

We're not used to seeing Megan Fox on the catwalk! The 5-foot-4 actress walked the runway at a Mexico City fashion show in September 2017 for the Liverpool Insurgentes department store's Fashion Fest.

Here's a collaboration we never saw coming — Megan Fox and Forever 21! The star teamed up with the retail giant in 2018 to launch a lingerie line that April. Prior to this deal, Megan had also worked on a lingerie line with Frederick's of Hollywood in 2016. She also became a co-owner of the brand.

Megan Fox's most recent theatrical release, "The Battle of Jangsari," came out in October 2019. The South Korean war film wasn't a massive hit in the States, though it did well in South Korea. Megan's seen here at a press conference for the movie in Seoul that August.

Megan Fox — seen here with husband Brian Austin Green and sons Noah, Bodhi and Journey leaving lunch at sushi restaurant Sugarfish in Calabasas, California, in September 2019 — has dismissed criticism aimed at her sons for having long hair and sometimes wearing dresses. "I let my kids wear what they want!" she told "Today" in 2018. "They will tell me what they are. It's not my job to teach them that."

Megan Fox and Brian Austin Green made a rare public appearance together in December 2019 at PUBG Mobile's #FIGHT4THEAMAZON event. A few months earlier, she'd finally asked a court to dismiss her 2015 divorce filing. But by the spring of 2020, speculation began mounting that Megan and Brian's marriage could be in trouble again after reports claimed they were living separately: During the early days of California's lockdown amid the coronavirus pandemic of 2020, they were spotted seemingly swapping their three sons in a parking lot, Us Weekly reported, adding that Megan appeared to be living in Calabasas while Brian was frequently seen in Malibu minus his wedding ring. Speculation intensified after Megan was photographed spending time with rapper-actor Machine Gun Kelly. On the May 18, 2020, episode of his "…With Brian Austin Green" podcast, Brian confirmed that he and Megan had quietly separated in late 2019. 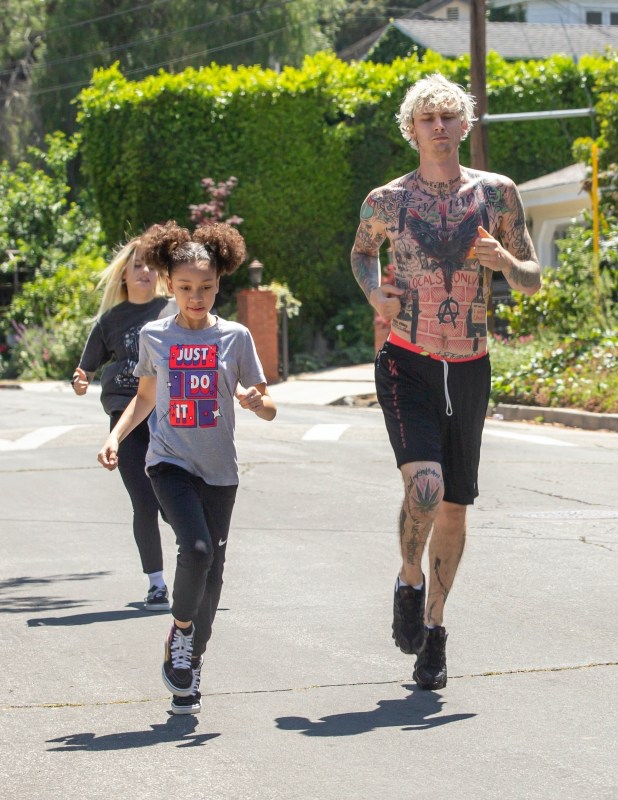 See Machine Gun Kelly on a run with his daughter, plus more photos of stars with their little ones

Could Lori Loughlin's prison time be cut short because of COVID-19? Plus, more news

Owen Wilson hits the beach in Malibu, plus more 2020 celeb sun-and-sand pics you need to see!

All the stars who appeared on 'Law and Order'

Take a look back at Carrie Underwood's impressive career in photos

David Spade steps out dressed like a pirate in LA, plus more pics you have to see!