The voice of the '90s is back — and she's fiercer than ever. 2017 has been big year for Celine Dion, whose emotional live performances and epic fashion statements have dominated headlines across the world. Join Wonderwall.com as we take a look back at Celine's biggest moments and reveal why 2017 was the year of her comeback.

Celine's heart will go on

For the first time in 30 years, Celine Dion kicked off a new chapter without her late husband and manager, René Angélil, by her side. Jan. 14, 2017, marked the first anniversary of René's death after a long battle with throat cancer. Adding to the emotional burden, Celine's brother, Daniel, died just two days after René. After a tough year of healing, the singer emerged with a new surge of energy and creativity that led her to experience many firsts this year (we'll look at these too!). Thank you, Celine, for showing us all that grief doesn't have to stop us from living our best lives.

Fans are so into her, they let her photobomb their engagement

Celine Dion proved that though she is a megastar, she can also be really down to earth. During a meet and greet backstage before one of her shows in Las Vegas, Celine couldn't hold back her surprise and perfected the photobomb face when a man got down on one knee and proposed to his girlfriend (who said yes!). But even during such a significant event, let's be honest — all eyes were on Celine.

She attended her first Grammy Awards ceremony in seven years

Celine Dion has won five Grammys — including two for "My Heart Will Go On" in 1999 — but she hasn't been seen at music's biggest night in years. That all changed in February: Celine turned heads when she set foot on the 2017 Grammys red carpet in a bold, emerald green Zuhair Murad Couture gown, complete with an adorned bow and statement shoulder pads. Girlfriend also got a hug, cheek kiss and peace sign from fellow vocal powerhouse Lady Gaga. And this was all before she presented the song of the year Grammy to Adele for "Hello."

She didn't disappoint at the "Beauty and the Beast" premiere

The "Beauty and the Beast" premiere in Los Angeles in March was a big night for Celine Dion. She and Peabo Bryson performed the theme song for the original 1991 animated Disney film and won an Academy Award and Golden Globe for it. So naturally, Disney tapped Celine to sing another original ballad, "How Does a Moment Last Forever," for the live-action version this year. The ever fashionable Celine showed up to the premiere wearing a high-necked powder blue Christian Siriano gown with a giant statement bow on one shoulder — a look perhaps only she could pull off.

Her touching tribute to the Bee Gees was unforgettable

Back in February, Celine Dion sang "Immortality" at an event honoring the Bee Gees. The two-hour TV special "Stayin' Alive: A Grammy Salute to the Music of the Bee Gees," aired on April 16. The composition and guest vocals for "Immortality" were done by Barry, Maurice and Robin Gibb for Celine's 1997 album, "Let's Talk About Love." The performance was especially emotional because of both Celine and Barry's losses over the years. "Year after year you grow and you sing this song in the show and then you take that song and you take it out of the show. Then you start to lose people that you love and this song brings back memories and you bring this song back into your show," she said in a preview clip from her tribute performance.

She stole the show at her first Met Gala

For her first time at the Met Gala — long dubbed fashion's biggest night — Celine Dion dominated. She stunned in a black-and-silver Atelier Versace gown with a sky-high slit, danced like she didn't care who was watching for Vogue's Instagram Series, broke into song for the security guards in the Medieval Wing, and finished the night in the best way possible — with a hot dog. Somehow she can make anything classy.

Twenty years after she sang the power ballad that cemented her career, Celine Dion performed the "Titanic" theme song once again at the Billboard Music Awards in Las Vegas wearing an impressive, radiant gown with puffed sleeves reminiscent of clouds and angel wings (and maybe icebergs?). The combination of the stunning dress, the huge and elegant cage of hanging crystals she sang inside, and her remarkable vocal range brought everyone to tears that night (even co-host Vanessa Hudgens). "My Heart Will Go On" hasn't been a favorite for Celine (or Kate Winslet… or, heck, even fans). It was actually voted one of the worst songs of the '90s by Rolling Stone magazine. But like Celine, the song has gained a second wind with fans and fellow musicians who've come to love the song and belt it out without a hint of irony.

Even Drake bowed down to her

When Celine Dion and rap star Drake met backstage at the Billboard Music Awards, it was like the stars aligned. Both Canadian artists had big nights at the BBMAs. Drake was so stoked that he actually bowed down to the queen (who was on another level of cool). "You're very iconic," Drake said before adding that he was "a year away from a Celine tat."

She went to the Paris Opera for the first time

Celine Dion, who had never been to the opera before this year, made time for the premiere of the "Renaissance" ballet at the Paris Opera amid her hectic European tour (because YOLO). "I'm in Paris for three days, I have 83 concerts [worldwide], so I'm very busy unfortunately — but tonight was the right night," Celine told WWD in June. But going was clearly worth it, as Celine admitted when she later wrote on Instagram that it was quite "an unforgettable night."

Celine Dion's transformation into a fashion icon is in major part thanks to her image architect Law Roach and her fearless attitude. The superstar doesn't care what people think and dresses for only herself. During Paris Couture Week in July, she brought her A-game and diva attitude to the Christian Dior show, became the focus of attention with her epic wardrobe (including a memorable mustard leather shirt dress) and mingled with fashion's elite. As she famously said, "The clothes follow me. I do not follow the clothes."

She had no problem posing nude for Vogue's Instagram

Celine Dion is so comfortable in her own skin that she posed naked while sitting on a white chair in a Vogue Instagram post, which quickly went viral. The singer wears haute couture almost exclusively for each performance, but she still slays even when stripped down to her birthday suit.

In August, when Celine Dion left the Royal Monceau Raffles hotel in Paris — which served as her home base for a few months during her European tour — she was showered with silver confetti and so much love from her fans. Because really, how else is a queen supposed to make her exit?

Celine Dion's first European tour in eight years was so successful that she broke records across Britain, becoming the highest grossing artist at various venues. She did 25 shows in 15 cities, including at two of the busiest arenas in the world, London's O2 Arena and Glasgow's SSE Hydro Arena.

She even has her hockey mom dance moves down pat

In August, Celine Dion cheered her 16-year-old son, René-Charles Angélil, from the stands of the Terrebonne Arena in Quebec and threw down some great moves to boot. René-Charles was playing a friendly hockey game with the U16 Jr. Golden Knights. Sports moms, take notes.

She launched a new handbag collection

Just in case you didn't think Celine Dion did it all, did we mention that she also has her own handbag collection? Yeah, the singer partnered with Bugatti this year on a line that includes 200-plus items including handbags, accessories and luggage priced from $88 to $298. An hour before the line's August launch at Brown's in Montreal, thousands of people who'd lined up to see her surrounded the store. In true Celine spirit, she also channeled some Rihanna that day when she burst into song.

She resumed her Las Vegas residency and got a standing O

Celine Dion, who's had an on-and-off residency at Caesars Palace in Las Vegas since 2003, returned to the Colosseum in October. It was an emotional and heartbreaking time, as Las Vegas had just experienced a tragic mass shooting that left 58 people dead and more than 500 injured. But the show must go on. So before Celine started her first performance of the season, she got real with her audience. "I never start the show like this, standing in front of the curtain just talking, but tonight is very different," she said. "On Sunday, we lost too many beautiful, innocent souls, and so many are still suffering, but tonight we're going to let these families know that we are supporting them and that we will help them through their tragic loss. They are going to need a lot of love, a ton of emotional support, as well as a great deal of financial aid. So I want you to know that the proceeds for tonight's show are being donated to the victims' families on your behalf." Celine celebrated her 1,000th show at Caesars on Oct. 8.

She showed up to GLAAD's Spirit Day and channeled Prince

Every year since 2010, people across the country visibly show their solidarity with LGBTQ youth by wearing purple through the largest anti-bullying campaign around, GLAAD (Gay and Lesbian Alliance Against Defamation) Spirit Day. This year, Celine Dion went above and beyond and sang a cover of Prince's "Purple Rain" in support. "Let it rain purple on #SpiritDay as we take a stand together against bullying, and to support LGBTQ youth!" she wrote on Facebook alongside a video of her special performance.

For Halloween this year, Celine Dion dressed up as Maleficent, while her 7-year-old twins — Eddy and Nelson — got into the spirit donning Michael Jackson costumes. Doesn't Celine seem like one of the most fun and creative mom? We'd vote: Best mom ever.

She hit the club with Steve Aoki

If you think Celine Dion and Steve Aoki are worlds apart, think again. The diva and the DJ came together in November at Omnia Nightclub's Las Vegas Victims Fund charity event and brought the house down with a new rendition of "My Heart Will Go On." A ballad with sick beats? Count us in. 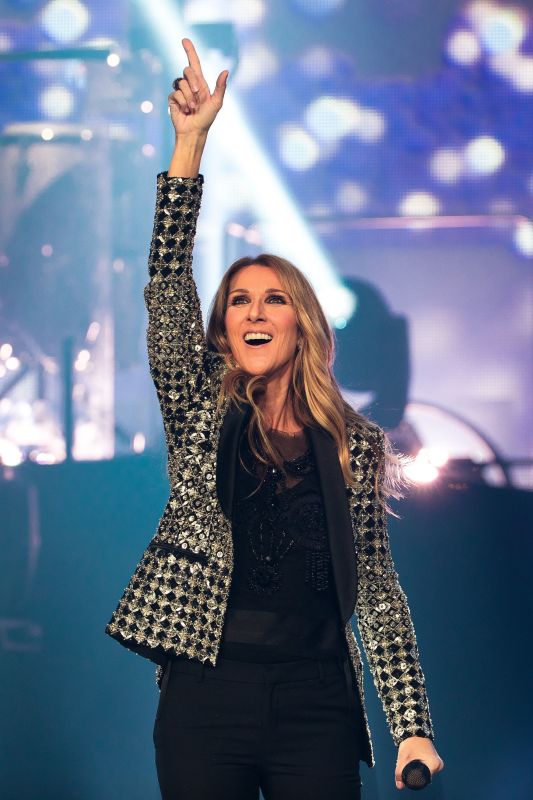 Up Next All hail the queen