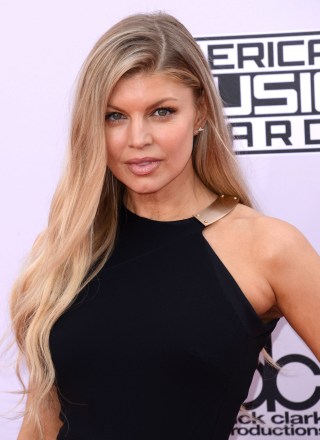 Share Tweet Pin Email
Fergie cut her teeth in the '80s with voice work on Charlie Brown specials and acting alongside Mario Lopez and Jennifer Love Hewittt on the Disney musical series, Kids Incorporated. She released two albums in the late '90s with the girl group Wild Orchid and while they toured with 'N Sync (when she briefly dated Justin Timberlake), they never took off. Fergie started experimenting with drugs, eventually becoming a crystal meth addict and shrinking down to 90 lbs. She stopped cold turkey and returned to the limelight when will.i.am asked her to sing on the Black Eyed Peas' single "Shut Up." Within a year, she and her humps were officially part of the band, adding a feminine touch to the triple platinum 2003 release Elephunk and mega-singles "Let's Get It Started," "Hey Mama," and "Where is the Love?" The group has now won five Grammys to date. She was just as successful with her 2006 solo venture The Dutchess. After a guest appearance on Las Vegas in 2004, she, who also appeared in Poseidon and Nine, started dating Transformers heartthrob Josh Duhamel. The pair married in 2009 and, despite some early rough patches, are now expecting their first child.