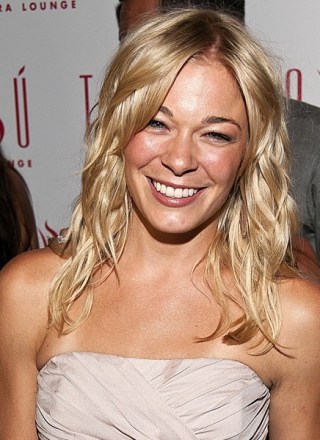 After discovering that she could sing in perfect pitch at just 18 months, Leann Rimes' parents enrolled her in vocal and dance lessons and by age 6 she has won her first talent contest. By 8, she was a Star Search finalist and was playing 100 gigs a year. A Texas deejay who wrote "Blue" for Patsy Cline saw her deliver the national anthem at a Dallas Cowboys game and helped launch her career in 1996 with her first album named after the hit cover, which sold more than 8 million copies. She won two Grammys in 1996, including Best New Artist, and ACM's Song OF The Year. With the help of an Early Years CD and "How Do I Live" ballad she was 1997's biggest-selling artist in the U.S. In 1998, she moved to LA with her mom and dated actor Andrew Keegan. In 2000, the "Nothin' But Love Makes Sense" singer brought suit against her father and former manager claiming they took $7 million from her (it was settled in 2002) and starred in Coyote Ugly. At an 2001 awards show rehearsal, she was reintroduced to dancer Dean Sheremet and they married less than a year later, but that fairy tale came to an end amid allegations claiming she had an affair with Eddie Cibrian on the set of Northern Lights surfaced in March 2009. By July both had left their spouses (his was Brandi Glanville) and they married in April 2011. Constant reporting on marital problems and her scary-skinny body plagues her and might have led to her 2012 treatment for anxiety.