The 2019 American Music Awards will be handed out on Nov. 24! But before we see what the stars wear on the big night, Wonderwall.com is taking a look back at the fashion from the 1999 AMAs. First up are some wild ensembles from one of the biggest boy bands of the era. Coordinating metallic coats? It's not something we want to see replicated anytime soon, but the men of *NSYNC made it work on the AMAs red carpet 20 years ago. From Justin Timberlake's icy blue shade to Joey Fatone's cherry red version, the boy band arrived in style before singing "You May Be Right" during the Billy Joel tribute later that night. Keep reading to see more 1999 AMAs fashion…

These days, we know Celine Dion as a true fashionista, but back in 1999, the superstar arrived at the AMAs in this simple two-piece look: a tiny black spaghetti-strapped tank with a gray-and-silver sparkly skirt. She won two awards that night — favorite pop/rock female artist and favorite adult contemporary artist.

RELATED: Most buzzworthy moments of AMAs past

Coordinates were everywhere on the American Music Awards red carpet in 1999. Monica jumped on the trend, wearing this metallic tank with a shiny silver floor-length skirt and strappy sandals.

Garth Brooks kept things country at the 1999 AMAs, adding a cowboy hat atop his three-piece suit. He was a big winner that night, taking home trophies in every category he was nominated in — artist of the year, favorite country male artist and favorite country album. He also performed "Powerful Thing" alongside future wife Trisha Yearwood during the show.

Could Jennifer Love Hewitt's look be any more '90s? The star arrived in this strapless minidress with floral embellishments and added a red choker and pair of black peep-toe slingbacks to complete her AMAs look.

Favorite country new artist winners the Dixie Chicks certainly arrived in style. The ladies rocked complementary looks with Emily Robison in a bold paisley-print gown, Natalie Maines in a shiny silver number and Martie Maguire in a bubblegum pink frock. Also working well together? Their updos and headbands — an accessory that was certainly one of the big trends on the red carpet. They performed their hit "Wide Open Spaces" later that night.

LeAnn Rimes' puzzling 1999 American Music Awards getup still confuses us to this day. It included a silver halter crop top and shiny white pants and was topped by a fuzzy white duster coat. Finishing things up? Those silver heels. She lost out to Shania Twain in the favorite country female artist category but was part of an excellent Billy Joel tribute performance alongside Brian McKnight, 98 Degrees, Shawn Mullins and *NSYNC.

Melissa Joan Hart, one of the hosts of the night along with Brandy, arrived in this midnight blue design with spaghetti straps and a thigh-high slit. She paired her sleek gown with a pair of strappy silver sandals.

Surprise! That's Charlize Theron in a strange leather jacket trimmed with purple fur. She attended the show with then-boyfriend Stephan Jenkins, the singer in Third Eye Blind. His band performed "Graduate" at the show but lost out in their two categories, favorite alternative artist and favorite pop/rock new artist.

One boy band that really got on the same page when it came to fashion? 98 Degrees, who were suited up in black with matching red dress shirts and ties for the 1999 AMAs. The well-dressed men performed "Uptown Girl" during the Billy Joel tribute at that year's ceremony.

Carmen Electra rocked this dark gray minidress with studded detailing and added a pair of black pumps with fur embellishments, bringing a little extra spice to the mix.

Well, you certainly couldn't say Cher's look was boring! The singer arrived in this odd combo — a black jacket with tulle-trimmed sleeves, a gray tank and tie-dyed cargo pants. She was on hand to perform her hit "Believe."

Shiny metallics were all the rage at the 1999 American Music Awards. Will Smith, a big winner that night, followed the trend with this funky buttoned-up shirt. He took home favorite pop/rock album for "Big Willie Style," favorite soul/R&B male artist and favorite soul/R&B album.

Shar Jackson was underdressed at the 1999 AMAs. She arrived in this silver spaghetti-strapped tank top and jeans and accessorized with a pair of heels and a choker necklace — a look better suited for a night out than a major award show.

The men of Next certainly looked sharp in tans and blacks at the 1999 American Music Awards. They performed twice that night — first singing their hit "Too Close" and then later singing "Love and Happiness" alongside K-Ci and JoJo. Unfortunately, they lost out that night in both their categories, favorite soul/R&B band/duo/group and favorite soul/R&B new artist.

Wyclef Jean looked dapper in this velvet jacket, which he wore over a black turtleneck. He performed that night alongside Whitney Houston and Babyface, singing "My Love is Your Love."

Siblings Donny Osmond and Marie Osmond arrived at the 1999 American Music Awards together. Donny selected a black-on-black suit and tie and Marie rocked this silver embellished jacket with black pants and strappy sandals.

Twins Tia and Tamera Mowry rocked complementary ballgowns to the 1999 AMAs — one thin-strapped in a deep red hue and the other strapless in a deep purple shade.

The rock band KISS came suited up in their standard makeup and bold black-and-silver outfits.

Deborah Cox sparkled like a disco ball in this slinky silver number. She added equally sparkly silver slingbacks to complete her metallic ensemble.

Paula Abdul opted for pale pink at the 1999 AMAs. She wore this slinky thin-strapped gown with a silver-and-pink shrug and carried a matching pearly pink bag.

Elise Neal rocked a brown snakeskin suit with a black bandeau top on AMAs night in 1999. She completed her look with dark metallic sandals and a bold dark lip shade to match.

The Goo Goo Dolls didn't seem to corroborate when it came to their looks at the 1999 ceremony. From a super-casual ensemble to a pinstriped suit paired with a hot pink printed dress shirt to a black see-through jacket atop a shiny silver shirt, there was something for everyone in this bizarre menswear mix. They performed their hit song "Slide" that night. 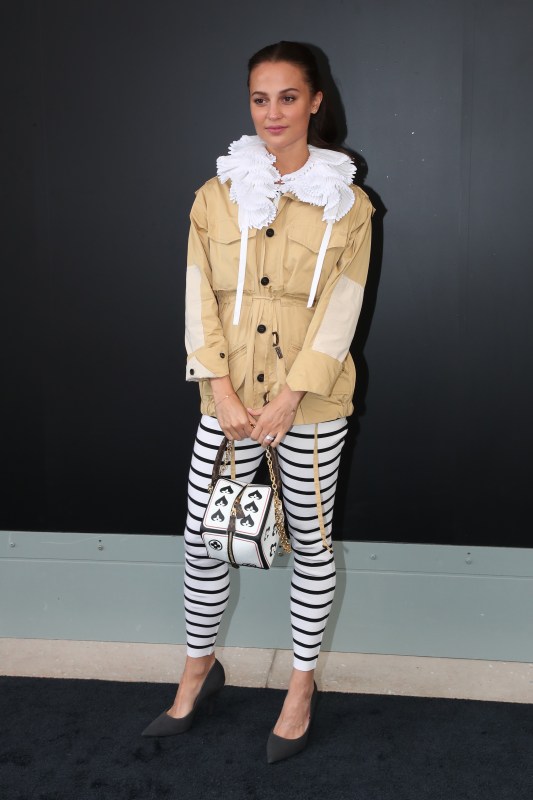