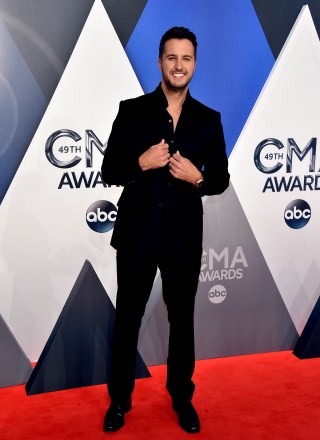 Luke Bryan, a peanut farmer's son who started playing guitar at 14, is a singer-songwriter best known for such hits as "Drink a Beer," "Someone Else Calling You Baby" and "That's My Kind of Night." He planned to move to Nashville after high school, but his brother's sudden death in a car accident motivated him to stay close to home and enroll at Georgia Southern University. While in school, he played with a band and released a self-produced album. Eventually, with his father's push, he made that move to Music City in 2001. He landed a songwriting contract and performed in clubs at night, which is where a Capitol Records rep signed him. His first major label record I'll Stay Me came out in 2007 and earned him a nomination for Top New Male Vocalist from the Academy of Country Music. Doin' My Thing also peaked at No. 2 two years later and two more years after that came Tailgates & Tanlines which had two more No. 1 hits. The 2013 ACM Entertainer of the Year became a crossover hit that year with the release of Spring Break…Here to Party and stayed in the pop eye with his No. 1 CD Crash My Party. The Country Music Association named him the 2014 entertainer of the year as well. Bryan married Caroline Boyer in 2006 and they have two sons, Thomas and Tatum.