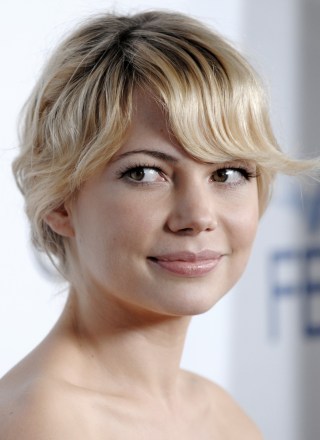 Share Tweet Pin Email
It only takes one great part change the course of a career and in Michelle Williams' case that part was playing the wife of a gay cowboy in Brokeback Mountain, a role director Ang Lee has admitted he wouldn't even have considered her for had he seen any of the six seasons she'd spent as Jen Lindley on Dawson's Creek. She fell in love with her on-screen husband Heath Ledger while filming the award-winning drama and had a baby, daughter Matilda, with him a year later in October 2005. By March, the couple attended the Oscars with his-and-her acting nominations. Having gotten her start at 14 in Lassie and graduated high school at 15, Williams had been steadily employed since 17 by The WB (now CW) network and various acclaimed indie projects including Me Without You, The Station Agent and Prozac Nation. But Brokeback propelled her into the world of leading ladies and made esteemed directors like Charlie Kaufman (Synecdoche, New York), Sarah Polley (Take This Waltz), Martin Scorsese (Shutter Island) and Sam Raimi (Oz The Great And Powerful) want to work with her. And unlike her relationship with Ledger, which ended surprisingly in October 2007 about six months before his accidental overdose, her movie-star status seems built to last. Williams, who has since seriously dated Spike Jonze and Jason Segal, has become an awards season regular — nabbing Best Actress Golden Globe and Oscar nominations for 2010's Blue Valentine and 2011's My Week With Marilyn. To top it off, she's a loyal friend who did an uncredited spot on Cougar Town, the series starring her bestie Busy Phillips.