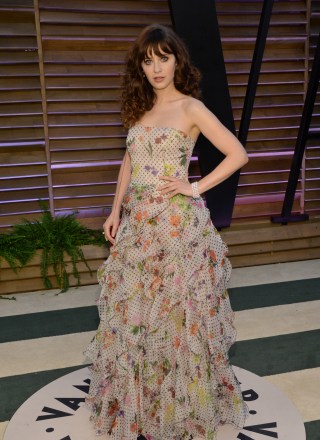 With her vintage style, big blue anime eyes, ability to pull of bangs, name pulled from a J.D. Salinger novel and charming quirky demeanor, Zooey Deschanel is the reason the word "adorkable" was coined. Born to an actress mom and cinematographer dad, she grew up on film sets across the globe and attending the prestigious Crossroads School alongside other celebrity offspring like Jake Gyllenhaal and Kate Hudson. While she briefly studied at Northwestern, the girl who once dreamed of being a Broadway singer dropped out to pursue acting full-time after making her debut on Kirstie Alley's sitcom "Veronica's Closet" in 1998. She built her skills with indie films like "Mumford" (1999), "The Good Girl" (2002) and "All The Real Girls" (2003) and small roles in blockbusters including "Almost Famous" (2000), "Elf" (2003) and "Yes Man" (2008). The vegetarian's career sped up with "(500) Days Of Summer" (2009) and her own TV show, "New Girl," which debuted in 2011 on the same network that airs her sister Emily's series "Bones" and earned her an Emmy nod in 2012. Not satisfied with just acting, she has released several CDs since 2008 as the female half of She & Him and is one of the founder's of the lifestyle blog Hello Giggles. She was married to Death Cab For Cutie frontman Ben Gibbard from 2009 to 2012. She gave birth to a daughter in August 2015 and announced that she'd secretly married her producer baby daddy Jacob Pechenik, whom she met on a movie set, simultaneously.