Kaley Cuoco has been in the spotlight for more than two decades and has been charming audiences for 10 years as Penny on "The Big Bang Theory." In honor of the actress's 32nd birthday on Nov. 30, 2017, Wonderwall.com is taking a look at some of Kaley's biggest life moments so far…

Kaley Cuoco's first feature-film appearance was in 1995's "Virtuosity." In 2002, she got her big break in television when she was cast as Bridget Hennessy on "8 Simple Rules." In 2002 when she was 16, Kaley attended the ABC fall schedule announcements in New York City to promote her show, which would be canceled three years later in 2005.

Kaley Cuoco not only stayed busy with her role on "8 Simple Rules," for which she won a Teen Choice Award for breakout female star in 2003, but she stood out as a cool girl at movie premieres that year. Here she is flashing a peace sign at the premiere of "What a Girl Wants" on March 27, 2003.

Kaley Cuoco was a fixture on the red carpet during her teenage years. She attended the American Eagle Outfitters Rocks event in Los Angeles on Aug. 25, 2004, where she wore a fun crop top and yellow heels.

Always a natural in front of the camera, Kaley Cuoco twirled in an orange dress at the Rock and Royalty to Erase MS event in Los Angeles on April 22, 2005.

In September 2007, Kaley Cuoco made her debut as Penny on a new CBS sitcom called "The Big Bang Theory." She's still starring on the international hit, which kicked off Season 11 in September 2017.

Kaley Cuoco and her "The Big Bang Theory" co-star Johnny Galecki secretly started dating in 2007 and were together for two years — but the world didn't learn of their clandestine romance until she spilled the beans in 2010, long after things had fizzled out.

In the summer of 2013, Kaley Cuoco briefly dated "Man of Steel" star Henry Cavill. The two were spotted on a grocery shopping trip to Gelson's supermarket in Sherman Oaks, California, on July 3. Kaley later opened up to Cosmopolitan magazine about the relationship. "I had no one following me until I met Superman," she told the mag. "I've been in this business for 20 years, and my whole life, I could go anywhere, do anything. There had not been one paparazzi photo of me until, like, several months ago. The recognition was crazy."

"The Big Bang Theory" star Kaley Cuoco tied with "The Middle" actress Eden Sher for the Critics' Choice Television Award for best supporting actress in a comedy series in 2013. Kaley wore a white strapless cocktail dress to the ceremony in Beverly Hills on June 10 that year to claim her prize.

Kaley Cuoco had a big year in 2013: After dating tennis pro Ryan Sweeting for three months, they got engaged. She showed off her ring at a basketball game between the Utah Jazz and the Los Angeles Lakers at the Staples Center in Los Angeles on Jan. 3, 2014.

Kaley Cuoco and Ryan Sweeting married in front of friends and family members on Dec. 31, 2013, at the Grand Vista hotel in Simi Valley, California. On Jan. 1, 2014, the bride — who wore a memorable pink dress for her walk down the aisle — announced her marriage via an Instagram pic, captioning it, "Yep 🙂 #thesweetings @ryansweething."

Kaley Cuoco won the People's Choice Award in 2014 for favorite comedy TV actress for her performance as Penny on "The Big Bang Theory." She posed happily with her prize while wearing a long blue floral-detailed skirt. She won the same award in 2015.

In 2014, Kaley Cuoco made a drastic change when she chopped her long locks into a cute pixie cut. And people went nuts for it. "When I wrapped Season 7 of 'Big Bang' a couple months ago, we cut it short that night," the TV star told Women's Health. "I haven't had my hair cut in over 20 years. I was ready for a change — I felt like I needed to reinvent myself and that cut was awesome."

On Sept. 25, 2015, Kaley Cuoco and Ryan Sweeting announced that they were divorcing after 21 months of marriage. Speaking about her difficult year, the dog-loving actress told the audience at Stand Up for Pits that Nov. 8, "My two pits have made this last year so much better for me." An onlooker spoke to Us Weekly about her appearance, telling the magazine, "Tears glistened in her eyes, [but] she quickly pulled it together and moved forward."

Kaley Cuoco jumped back on the horse — literally — on Oct. 4, 2015, and placed fourth in the Longines Masters of Paris Trophy competition in Los Angeles. Kaley is a proud equestrian who owns five horses. She told Los Angeles Magazine that she got her first horse, Santos, when she was 18. "People don't realize that horses are like dogs. At the stable, when I call Santos' name, he'll start moving around in his stall, whinnying, and is so excited. He's like, 'Mama's here!'" she shared. "The bond between a person and a horse is like nothing else — it's hard for people to understand unless they have one."

Two months after announcing her divorce, Kaley Cuoco did her best to get rid of a permanent memory of estranged husband Ryan Sweeting: The actress had a huge butterfly inked on her back to cover up an old tattoo of their wedding date. Alongside a snap of herself in the tattoo parlor, Kaley wrote on Instagram, "Thank you @nero_sct @studiocitytattoo for helping me right my wrongs.. 👍🏼 note to self- do not mark your body with any future wedding dates 😂 #under30mistakes #donttakeyourselftooseriouslykids."

Kaley Cuoco's divorce from Ryan Sweeting was settled in May 2016, and the star definitely came out on top! Since they had a prenuptial agreement, she was able to keep all $72 million of her "The Big Bang Theory" contract fortune and the two properties the couple shared. In fact, all Kaley actually had to pay Ryan was a paltry amount, in the grand scheme of things: a $165,000 lump sum, some of his $195,000 personal trainer tab, some "cash and gift certificates" that he'd acquired during their marriage and $55,000 of his lawyer fees. Oh, the power of the prenup!

Forbes released its highest paid television actress list in September 2016 and Kaley Cuoco came in at a very respectable second place. The actress earned $24.5 million for her work on "The Big Bang Theory," coming in just behind Sofia Vergara and her "Modern Family" earnings of $28.5 million.

Red carpet official! Kaley Cuoco and Karl Cook made their red carpet debut as a couple at the Longines Masters Los Angeles Gala in Long Beach, California, in September 2016. The happy couple posed and held hands at the equestrian event, which seemed perfectly fitting since they met at a horse show.

In November 2016, Kaley Cuoco opened up to Women's Health magazine about her past plastic surgery, confessing to having made adjustments to her nose and breasts. "Years ago, I had my nose done. And my boobs — best thing I ever did," Kaley admitted. "Recently I had a filler in a line in my neck I've had since I was 12. As much as you want to love your inner self… I'm sorry, you also want to look good. I don't think you should do it for a man or anyone else, but if it makes you feel confident, that's amazing."

Kaley Cuoco revealed on a September 2017 episode of "Jimmy Kimmel Live" that she is a "huge drinker." The actress admitted she was caught with a wine opener in her bag while going through security at an airport. "She, like, takes it out and I'm like, oh my God, I'm going to be on a no-fly list," Kaley said. "Here's the thing — I just like alcohol and, apparently, I needed to be very prepared."

Kaley Cuoco expanded her resume in October 2017 when she founded her own film and television production company, Yes, Norman Productions. The company has already signed a multi-year first-look production deal with Warner Bros. and optioned the rights to its first series, "The Flight Attendant," which Kaley will star in and executive produce. Congrats!

In November 2017, Kaley Cuoco declared boyfriend Karl Cook her "true soul mate" in a Thanksgiving Instagram post. "I have an incredible family, my true soul mate, amazing friends, the best job in the world, epic dogs and I get to ride the best ponies anytime I want. I am beyond grateful," she wrote. Could we be hearing wedding bells soon? 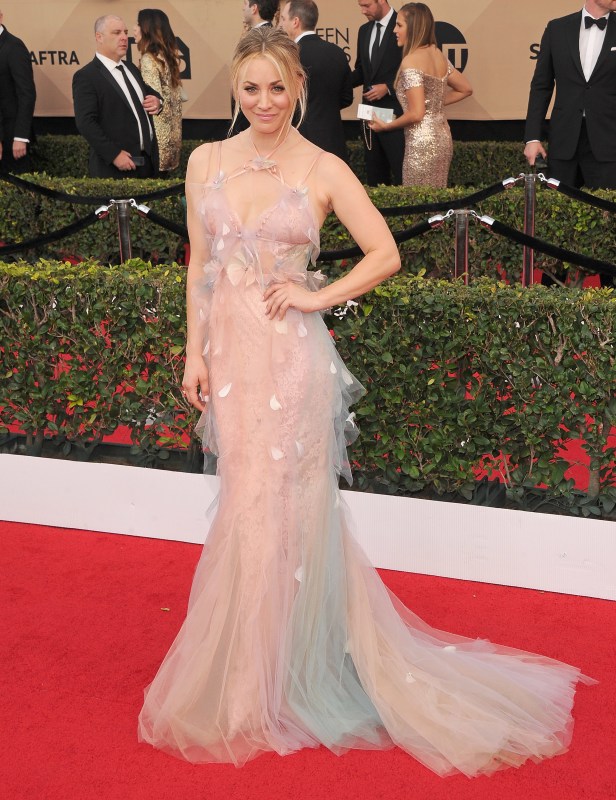 Up Next Bangin' new year