One thing we know for sure is that comedian Kate McKinnon has no trouble making us keel over laughing on the big and small screens. But there's a lot about the breakout "Saturday Night Live" star that we didn't know. Since the funnylady is turning 33 on Jan. 6, 2017, here are 10 things you ought to learn about her before she gets you laughing again.

1. She got her start in sketch comedy, partially unpaid

In 2007, Kate McKinnon started to get her name out there with a role on Logo TV's "The Big Gay Sketch Show." In addition to her three seasons on the series, she also worked unpaid doing live sketch comedy at New York's Upright Citizens Brigade for half a decade. "That's where I learned everything," she told GQ. "Just by doing and doing, and being around funny people, and being taught by funny people." Now that's what we call real dedication to the comedy craft!

RELATED: Jimmy Fallon: 10 reasons we love the host of "The Tonight Show"

2. She was the first openly gay woman on "SNL"

All of Kate McKinnon's work in sketch comedy paid off when she scored a role on "Saturday Night Live" in 2012. She goes down in history as the cast's first openly gay woman! That, along with the fact that she's still a permanent fixture on the iconic NBC variety show, are things to be very proud of.

3. Her first major movie role was in the "Ghostbusters" reboot

Kate McKinnon had already been in smaller big-screen roles — she had a cameo in "Ted 2" and did some voiceover work in "Finding Dory 2." But in 2016, she scored her first leading role in a major movie when she played Dr. Jillian Holtzmann in the reboot of "Ghostbusters." She starred alongside fellow funnywomen Melissa McCarthy and "SNL" stars Leslie Jones and Kristen Wiig. The film got the ball rolling: Later that year, she starred in "Office Christmas Party." She's slated to be in 2017's "Rock That Body" with Scarlett Johansson.

4. She already has a head start on Emmy Awards

Kate McKinnon may be a fairly new comedy star, but she's already accrued a handful of Emmy nominations and a big win — all for her work on "Saturday Night Live." In 2014, she received her first two nods for Outstanding Supporting Actress in a Comedy Series and Outstanding Original Music and Lyrics. She got another nomination the next year, but finally won the supporting actress trophy in 2016. To put things in perspective, big stars like Kirsten Wiig and Amy Poehler had been up for that award in the past, but never won.

5. Celebrity impressions are the name of her game

Kate McKinnon is an ace at celebrity impressions! When she first started out on "Saturday Night Live," she nailed roles like talk-show host Ellen DeGeneres and even pop star Justin Bieber. Her roster includes super-realistic character acting as Iggy Azalea, Penelope Cruz, Edie Falco, Jodie Foster, Shakira and Ed Sheeran. More recently, she's come into her own doing an on-point impersonation of politician Hillary Clinton. Check it out on the next slide…

6. She boasts more talents than you think

Kate McKinnon's other talents only make her sketch comedy better. First of all, she has a degree in theater from Columbia University. Plus, she knows how to play guitar, cello and piano. Just look at her go in this 2016 "Saturday Night Live" sketch as Hillary Clinton. Kate mastered playing the keys while singing "Hallelujah." It's clear that her past education helped propel her acting abilities.

Meow! Kate McKinnon can't get enough of cats. She has one of her own — a 17-pound black-and-white fluffball she calls Nino Positano, named after the pizzeria where he was found. She loves the kitty so much, she even referred to him as her "son" while on "The Tonight Show with Jimmy Fallon." She also does voice work on the PBS Kids show "Nature Cat." And Kate has a regular sketch called "Whiskers R We" on "Saturday Night Live," playing a crazy cat lady with Kristen Wiig.

9. The thought of a serious on-screen kiss creeps her out

You can count on Kate McKinnon to give a goofy on-screen kiss any day, but the star doesn't think she could handle being all serious about a liplock. "If you asked me to seriously kiss someone on a screen, I would be very uncomfortable," she said to Details about a "SNL" smooch with Louis C.K. "But I will lick any part of your face." We very much look forward to a lot more hysterical and messy mouth-to-mouth scenes from Kate!

10. She would rather eat cheese than party it up

Don't expect to find Kate McKinnon getting messy at some of the hot Hollywood afterparties this awards season. She'll more likely be where the food is at. "The afterparty is always at a restaurant, and for me, the fun starts when I get a cheese platter," Kate joked to Details. "That's as f—ed-up as I get." We love that Kate doesn't need a swanky soirée to have some fun. Pass the cheddar, please! 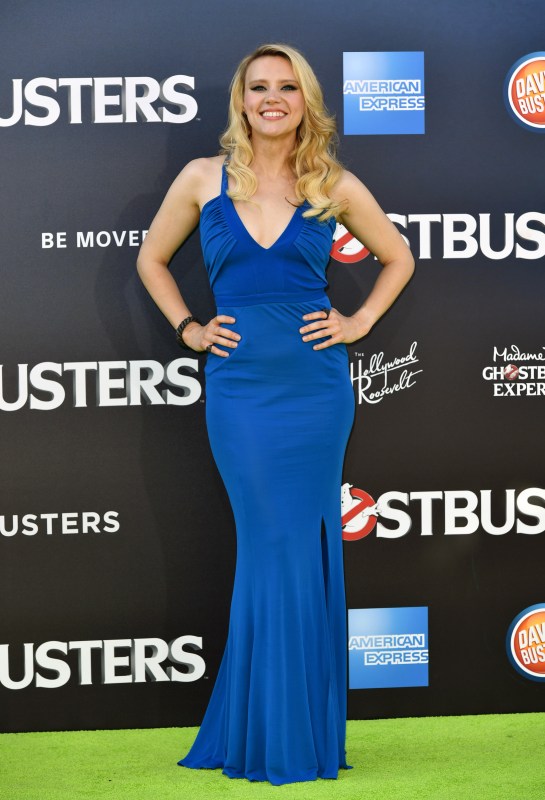 Up Next Did You Know?