Just who is Tom Cruise anyway? Wonderwall.com is taking a look back at some of the most surprising things about the A-list actor that even diehard fans will find shocking! Keep reading to get the inside scoop on the weird and wacky world of Tom Cruise…

Let's start with an easy one: Any true fan of Tom Cruise already knows that Cruise is actually the A-list actor's middle name. His full name is Thomas Cruise Mapother IV. (And here's a bonus: His cousin William Mapother portrayed Ethan Rom on "Lost.")

No. 2: Each of his wives has been 11 years older than her successor

No. 3: He likes to play hide-and-seek with his adult pals

According to Leah Remini, Tom Cruise once invited her to play hide-and-seek at his home with guests including Will Smith and Jada Pinkett Smith. "At first I thought he was joking, but no, he literally wanted to play hide-and-seek with a bunch of grown-ups in what was probably close to a 7,000-square-foot house on almost three full acres of secluded land," the actress wrote in her memoir "Troublemaker: Surviving Hollywood and Scientology." When Leah replied that she couldn't play because she was wearing five-inch Jimmy Choo stilettos, Tom allegedly replied, "Well, good. So you're It, then," tagged her and then ran to hide.

No. 4: He got into some trouble during his high school years

Tom Cruise attended three high schools, including the St. Francis Seminary School in Cincinnati, where — according to People magazine — he took a vow of celibacy. Tom left the school after a year when his family moved to New Jersey, but according to a former classmate, that's not the whole story. Shane Dempler told the Daily News in 2013 that the school asked Tom not to return after he and his pal were caught stealing liquor from the fathers. Says Shane, who also claims that he and Tom liked to sneak out and smoke cigarettes together, "The school wrote a letter to our parents saying they liked us both, but would prefer if we didn't return. So we weren't kicked out, just preferred not to go."

No. 5: He's been big for the sunglasses business

According to the Los Angeles Times, sales of Ray-Ban's Wayfarer sunglasses nearly doubled in 1983, the year that Tom Cruise wore a pair during his star-making turn in "Risky Business." Three years later, the A-list actor donned a pair of Ray-Ban Aviators in "Top Gun." Sales of that frame grew by 40 percent a year in the years following the film's 1986 release.

No. 6: Animators modeled Disney's Aladdin after him

In 1992, a source at Disney told People magazine that animators modeled Aladdin after Tom Cruise. "Photos of the actor decorated the office of the top animator responsible for the title character in the film," the mag reported.

No. 7: He claims Scientology cured his dyslexia

"I was a functional illiterate," Tom Cruise, who was diagnosed with dyslexia at age 7, told People magazine of what life was like when he graduated from high school in 1980. It wasn't until his adult years that the "Top Gun" star learned to read through Study Technology, which was created by Scientology founder L. Ron Hubbard.

No. 8: He's had some very high-profile best men

When Tom Cruise wed Mimi Rogers in 1987, his pal and "The Outsiders" co-star Emilio Estevez served as his best man. When he and Katie Holmes tied the knot in 2006, Scientology leader David Miscavige had the honor.

No. 9: He bought his first motorcycle at age 10

Tom Cruise's passion for motorcycles dates all the way back to the early '70s when the actor was still years away from his first driver license. "My first motorcycle was a little Yamaha," he said during an appearance on "The Tonight Show with Jay Leno" in 2013. "My mother was away working for the weekend and I'd stored it in the basement. I didn't tell her I bought it because I didn't want her to panic right away. I was about 10 years old. I was allowed to get whatever my money could buy." Apparently his mom's panic was warranted: Tom crashed his little Yamaha the first time he took it for a whirl.

According to the Chicago Tribune, Tom Cruise stopped a London woman, Rita Simmonds, from being mugged of $153,000 worth of jewelry back in 1998. The woman was stepping out of her car when she was attacked. "Tom was brilliant," Rita told the Evening Standard. "He rushed down the road with his bodyguards and chased the attackers away."

Back in 1996, Tom Cruise was driving in Santa Monica, California, when he witnessed a car plow into 23-year-old Brazilian aspiring actress Heloisa Vinhas — who was walking to a bus stop from her job at a nearby restaurant — and then flee the scene. According to People magazine, the A-list actor waited for an ambulance to arrive and then followed Heloisa to the hospital, where she was treated for a broken leg and bruised ribs. When Tom found out that the woman didn't have insurance, he arranged to pay her $7,000 emergency room bill.

No. 12: He learned to dance from watching "Soul Train"

"I learned how to dance watching 'Soul Train,'" Tom Cruise told W magazine in 2012. "I noticed that if a guy could dance, he'd get a lot of attention and girls would want to dance with him. I worked very hard at imitating those moves."

Long before Robert Downey Jr. suited up as Tony Stark, Tom Cruise was attached to produce and star in an early iteration of what eventually became the 2008 superhero film "Iron Man." "There have been discussions [with Tom] over the last several years and there are a number of factors involved," Marvel exec Kevin Feige told the Comics Continuum in 2004. "All we know is that we're putting all the pieces in place and then we'll find the best Tony Stark that we can get." Not long after, Tom officially walked away from the project. "As it was lining up, it just didn't feel to me like it was gonna work," he reportedly said of an early draft of the "Iron Man" script. "I need to be able to make decisions and make the film as great as it can be, and it just didn't go down that road that way." 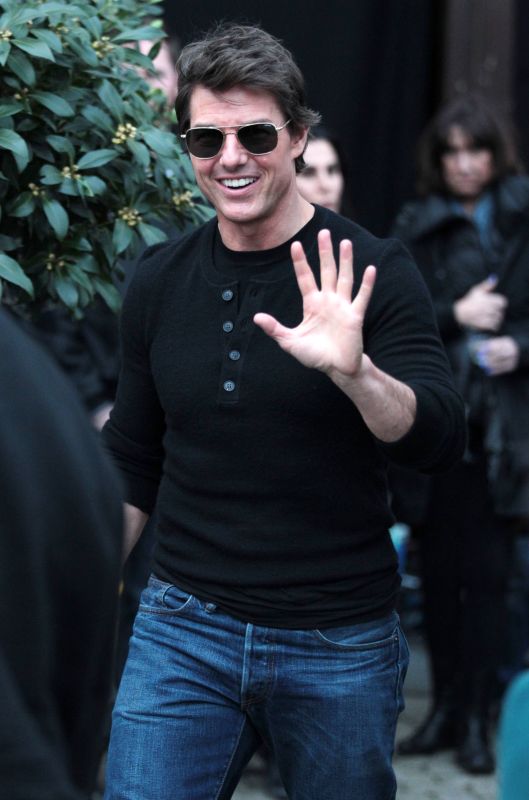 Up Next Say What?!