Some of our favorite stars celebrate their 40th birthdays in 2021. Join Wonderwall.com as we take a look at which celebrities were born in 1981… starting with this talented British actress… Dec. 28 marks BAFTA and Golden Globe nominee Sienna Miller's 40th birthday.

Keep reading to see more stars who were born in 1981…

It's been a big year — a huge, happy year — for Britney Spears. The "…Baby One More Time" and "Oops!… I Did It Again" hitmaker got engaged to love Sam Asghari, succeeded in ending the conservatorship that ruled her life for more than 13 years and on Dec. 2, she turned 40!

Grammy-winning music star Beyonce turned the big 4-0 on Sept. 4. "I've spent so many years trying to better myself and improve whatever I've done that I'm at a point where I no longer need to compete with myself. I have no interest in searching backwards. The past is the past," she told Harper's Bazaar a month before her 40th. "I feel many aspects of that younger, less evolved Beyonce could never f*** with the woman I am today."

Gone are his boy band days! On Jan. 31, "Man of the Woods" hitmaker and father of two Justin Timberlake blew out 40 candles on his birthday cake.

On Feb. 9, Golden Globe-winning actor Tom Hiddleston — who delighted audiences as Loki in the Marvel Cinematic Universe and wowed them as the titular British soldier in "The Night Manager" — turned the big 4-0.

Grammy-nominated British singer Natasha Bedingfield — the voice behind hits like "These Words" and "Unwritten," which grew even more popular when it became the theme song for the MTV reality show "The Hills" — turned 40 on Nov. 26.

On Nov. 14, Emmy-nominated former "Saturday Night Live" cast member Vanessa Bayer — who made us laugh with her "pretty cool" impressions of Miley Cyrus, Jacob the bar mitzvah boy and more — blew out 40 candles on her birthday cake.

Zara Tindall turned 40 on May 15. The queen's eldest granddaughter, who's an Olympic silver medal-winning equestrian, welcomed her third child in March.

"One Tree Hill" alum Chad Michael Murray, who's more recently popped up as a recurring character on The CW's "Riverdale" and in a few TV movies, stepped into his 40s on Aug. 24.

Joseph Gordon-Levitt — the talented actor we've loved in everything from "3rd Rock From the Sun" and "(500) Days of Summer" to "Inception," "Looper" and "Snowdown" — celebrated his 40th birthday on Feb. 17.

Tennis great Serena Williams — who holds the record for the most Grand Slam singles titles won during the Open Era with 23 — entered her 40s on Sept. 26.

From "Roseanne" to "The Conners," former child star Michael Fishman has enjoyed an enduring career in entertainment! The actor turned 40 on Oct. 22.

Grammy-winning "American Idol" alum and Academy Award-winning actress Jennifer Hudson joined the 40s club on Sept. 12. She got a pretty great birthday gift too: Days earlier, she won her first Emmy Award (as an executive producer on "Baba Yaga," a virtual reality animated film), which means that J-Hud is just a Tony Award win away from joining the elite EGOT club!

"Homeland" star Rupert Friend — who next appears in Wes Anderson's "The French Dispatch" and on the Disney+ Obi-Wan Kenobi series, which is due in 2022 — celebrated his 40th birthday on Oct. 9.

Oscar winner Rami Malek — who in 2021 will star as the villain in the James Bond film "No Time to Die — celebrated his 40th birthday on May 12.

"Fringe" actor Seth Gabel had a reason to celebrate in 2021: On Oct. 3, Bryce Dallas Howard's husband joined the 40s club!

2021 has been a big year for Christina Milian. Not only did the singer-actress turn 40 on Sept. 26, but she welcomed her third child in the spring.

We love this Gilmore girl! "Gilmore Girls" and "The Handmaid's Tale" actress Alexis Bledel marked her 40th on Sept. 16.

Let's hope Ben Schwartz didn't get run over by a Lexus like his alter ego, Jean-Ralphio from "Parks and Recreation," on Sept. 15: It's the day the actor turned 40.

Duchess Meghan — who in June released a bestselling children's book, "The Bench," and welcomed her second child, daughter Lilibet "Lili" Diana, with husband Prince Harry — celebrated her 40th birthday on Aug. 4. To mark the milestone, she launched the 40X40 mentorship. "…For my birthday, I have asked 40 friends, activists, athletes, artists, and world leaders to help kickoff a global effort by contributing 40 minutes of mentorship to support women re-entering the workforce," Meghan wrote on her Archewell website, "to help women regain confidence and rebuild their economic strength" especially due to the coronavirus pandemic.

Duchess Meghan's "Suits" co-star Abigail Spencer — who we also loved on "Mad Men" and "Timeless" — shares a birthday with the royal: Abigail also turned 40 on Aug. 4. "We were born on the same day, hours apart, in the same year … she's a trusted friend and one of the most glorious people I have ever met," Abigail told "Entertainment Tonight."

Dutch actor Michiel Huisman — you know him from acclaimed shows like "Game of Thrones," "Treme" and "Orphan Black" — marked his 40th on July 18.

On June 20, former child star and season 10 "The Voice" winner Alisan Porter — whom you know from movies like "Curly Sue" and "Parenthood" — turned the big 4-0.

Oscar winner Natalie Portman, who's starred in critically acclaimed films including "V for Vendetta," "The Other Boleyn Girl," "Black Swan" and "Jackie," celebrated her 40th birthday on June 9.

"10 Things I Hate About You" actress Larisa Oleynik is not a teen anymore! The "Secret World of Alex Mack" star celebrated her 40th birthday on June 7.

Comedian Amy Schumer turned 40 on June 1. Next up, she'll star on the Hulu comedy series "Life & Beth," which she also created, writes, directs and executive produces.

Anders Holm, who starred on "Workaholics" alongside Blake Anderson and Adam DeVine, joined the 40s club on May 29.

"The Sopranos" alum Jamie-Lynn Sigler celebrated her 40th birthday on May 15.

Danielle Fishel, who portrayed whiz kid Topanga Lawrence on "Boy Meets World," turned 40 on May 5. She marked her big birthday with a very special announcement: She's pregnant with her second child, a son. "F O R T Y! I've never been more excited or hopeful for the next decade of my life," she captioned an Instagram photo revealing her baby bump. "I had a beautiful childhood, teenage years I still dream about, my 20's were insane (and mostly miserable) and my 30's brought me lows and highs but eventually I leveled out to a place of security. Security in who I am, what I believe, and with whom I want to spend precious time. I couldn't be more grateful to enter my 40's with my amazing husband and son, excitedly expecting the arrival of baby boy #2. My birthday wish is for all of you to tell someone how much you love them and walk through today with more patience than you normally might."

Hayden Christensen — who portrayed Anakin Skywalker in the "Star Wars" prequel trilogy and will return to the role in the upcoming Disney+ Obi-Wan Kenobi series — turned 40 on April 19.

"True Detective" alum Taylor Kitsch had a full heart on April 8: It was the "Friday Night Lights" star's 40th birthday.

Broadway actress Laura Bell Bundy, who originated the role of Elle Woods in the "Legally Blonde" musical, sang her way into her 40s on April 10.

"Boardwalk Empire" star Michael Pitt — who's also known for his work in "Murder by Numbers," "The Dreamers" and "Funny Games" — celebrated his 40th birthday on April 10.

Reality TV star-turned-DJ Paris Hilton blew out 40 candles on her birthday cake on Feb. 17 — just a few days after she and venture capitalist Carter Reum got engaged on a private island while on vacation to celebrate her big birthday.

Bryce Dallas Howard, who earned a Golden Globe nod for her performance in "As You Like It" and battled dinosaurs in the "Jurassic World" franchise, celebrated her 40th birthday on March 2.

On March 28, Julia Stiles — who's been in everything from "10 Things I Hate About You" and "Save the Last Dance" to "Dexter" and the "Bourne Identity" franchise — blew out 40 candles on her birthday cake.

Stephen Amell, who played Oliver Queen aka Green Arrow on The CW's "Arrow" — and will next star on the small-town Georgia wrestling drama series "Heels" — joined the 40s club on May 8.

On March 29, Tony Award-nominated actress Megan Hilty — who's appeared in Broadway musicals like "Wicked," "9 to 5: The Musical" and "Noises Off" and memorably starred on TV's "Smash" — turned the big 4-0.

Destiny's Child singer Kelly Rowland turned 40 on Feb. 11. To mark the occasion, she debuted a new single, "Black Magic," the night of her milestone birthday. It was a special time for the vocalist for personal reasons too: She welcomed her second child, son Noah, three weeks earlier, and featured him in the song's video.

Emmy-winning "Orange Is the New Black" star Uzo Aduba blew out 40 candles on her birthday cake on Feb. 10.

"Lord of the Rings" star Elijah Wood marked his 40th birthday on Jan. 28.

Another "Suits" star, Patrick J. Adams, turns 40 in 2021: His birthday is on Aug. 27. He welcomed his second child with wife Troian Bellisario just a few weeks before on-screen wife Meghan Markle had her second baby.

"This Is Us" star Susan Kelechi Watson celebrates her 40th birthday on Nov. 11.

On March 30, "American Housewife" and "Eastbound & Down" actress Katy Mixon blew out 40 candles on her birthday cake.

Emmy-nominated actress Carrie Coon, who you know from projects like "Gone Girl," "Fargo" and "The Leftovers," turned 40 on Jan. 24.

Ben Barnes, who's starred in "The Chronicles of Narnia" film franchise as well as TV shows like "Westworld" and "The Punisher," turns 40 on Aug. 20.

Majandra Delfino, who appeared on "Roswell" and CBS's "Friends with Better Lives," marked her milestone 40th birthday on Feb. 20.

On Jan. 26, "Once Upon a Time" alum Colin O'Donoghue celebrated his 40th birthday.

When Evanescence frontwoman Amy Lee wakes up on Dec. 13, she'll be 40.

On July 24, Summer Glau — who you know from "Firefly," "Serenity,"  "Terminator: The Sarah Connor Chronicles," "Arrow" and more — marked her milestone 40th birthday.

My Chemical Romance guitarist Frank Iero has two reasons to celebrate on his birthday this year: He's turning 40, and it happens on Halloween, Oct. 31! 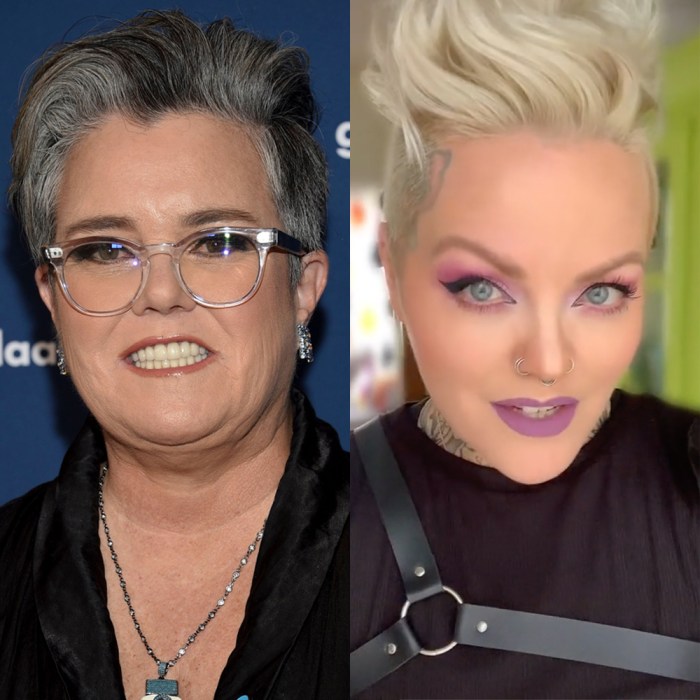