Joe Rogan found his named trending on April 28 thanks to comments he made on his popular podcast in which he said that healthy young people shouldn't get the COVID-19 vaccine. "If you're a healthy person, and you're exercising all the time, and you're young, and you're eating well, like, I don't think you need to worry about this," he said of the coronavirus. "If you're, like, 21 years old, and you say to me, 'Should I get vaccinated?' I'll go 'No.'" The controversial comments caused a lot of back-and-forth on social media. Even the White House got involved and ripped the host. "I guess my first question would be, did Joe Rogan become a medical doctor while we weren't looking?" a White House aide said. Billie Eilish's brother, musician-producer Finneas, was among the celebrities who blasted Joe. "I'm sure joe rogan knows more about UFC than your average immunologist does and I'm gonna take a shot in the dark and say I would imagine he knows a little [expletive] less about vaccines than your average immunologist." The day after his comments went viral, Joe backpedaled a bit. "I'm not a doctor," he said. "I'm a… moron." He also insisted, "I'm not an anti-vaxx person. I said I believe they're safe and I encourage many people to take them. My parents were vaccinated." Though he stopped short of admitting his argument was wrong, he did acknowledge why even young healthy people need to be vaccinated to end the pandemic. "There's some legitimate science behind this…Their argument was, you need it for other people [so you don't pass it to them]," he said. "But that's a different argument. That's a different conversation."

Former "19 Kids and Counting" star Josh Duggar has been charged with receiving and possessing child pornography. Court documents allege that Josh used the Internet to download child sexual abuse material. The disgraced reality TV star allegedly possessed material which depicted the sexual abuse of children under the age of 12, KNWA reported. He has pleaded not guilty. Josh appeared in court via Zoom on April 30. The 33-year-old was arrested by federal agents on April 29 (just a few days after his wife announced her seventh pregnancy). He is required to remain behind bars until at least May 5 for a detention hearing. If he's eventually released on bond, the judge said he must reside in a home without any minor children present, which all but rules out him staying with family.

Tristan Thompson has been accused of cheating on Khloe Kardashian — again. During a brief chat on the "No Jumper" podcast, Instagram model Sydney Chase said she hooked up with the Boston Celtics player in January. "He told me he was not in a relationship anymore, so I said OK," she claimed. "We talked, we hung out multiple times, we went out together, everything." Knowing who Tristan was, Sydney maintained that she asked him directly if he was single before their tryst, and he responded, "Yes." She said, "It happened, and then I found out he was not single, and I cut him off." On April 26, she doubled down on her claims. "Yes the Tristan rumors are true," she wrote on TikTok. "The last time we had contact — besides when he messaged me after finding out about the interview, it was the day after his daughter's [April 12] birthday party." Khloe has yet to publicly respond to or acknowledge the allegations.

Lori Loughlin and husband Mossimo Giannulli apparently have an eye on Idaho. The pair — who are both newly out of prison, where they served time for their roles in a college admissions scandal — are reportedly looking to reset their lives by buying a home in the Gem State. "They had looked at homes earlier this year in Idaho and were prepared to move out of Los Angeles, but eventually decided to stay as their daughters really wanted them close by at the time," a source told Us Weekly. The couple shares Bella, 22, and Olivia Jade, 21. The insider suspects that Idaho will "be a good call for them," particularly based on their love of the outdoors and desire for privacy. "They can start anew and work on their marriage together as the whole college scandal has taken a toll on both of them, as well as their marriage," the source concluded.

More details are emerging surrounding the arrest of Ronnie Ortiz-Magro. On April 29, TMZ reported that Ronnie's girlfriend, Saffire Matos, called 911 after she and the "Jersey Shore" star got into an argument that turned physical the week earlier. Once police arrived, they noticed "visible marks on Saffire's body" and determined that Ronnie was the aggressor. The alleged marks on her body were just "one of multiple" observations that authorities made before they handcuffed Ronnie on April 22, the report states. Although Saffire was clearly scared enough to call 911 that evening, she's since changed her tune. "Ronnie and I are fine," she wrote on her Instagram Story on April 26. "There is a lot of misleading information floating around out there. With anybody who reached out with concern I appreciate it with all my heart, but everything that's being portrayed out there are not facts." Ronnie also also broken his silence and thanked friends who didn't "betray" him.

Is Kim Kardashian already dating? A report this week has again linked the reality TV star to CNN commentator Van Jones. "A new burble's coming out of the Kim Kardashian klub. Throats are clearing after whispering the name Van Jones," the New York Post's Cindy Adams wrote on April 25. Van, the columnist said, "knows folk who'll quickly shut their tongues if his name is even breathed in connection" with Kim. Van and Kim have been friends for several years, and fans immediately linked them after the "Keeping Up With The Kardashians" star filed to divorce Kanye West in February (as if they were willing it to happen!). But some media outlets including Radar Online insist that the two are merely friends and have indicated that Van wants nothing to do with "the circus of reality TV crews and social media."

The 2021 Academy Awards was a night of surprises… but you probably didn't watch. According to Variety, about 9.85 million viewers tuned in to see the show on April 25, which is by far an all-time low for the annual telecast. By comparison, the 2020 Oscars had previously owned the worst ratings record with 23.6 million viewers. Mathematically, the 2021 Oscars saw a 58% drop in viewership compared to the previous low from one year prior. The show was also reamed across the board. The New York Post dubbed it "torturous," whereas Entertainment Weekly said it was "weird." Other words used where "humorless" and "sluggish." For those who actually watched, they saw "Nomadland" have a big night, Anthony Hopkins surprisingly best Chadwick Boseman for best actor, and Frances McDormand win two Oscars (oh, and Daniel Kaluuya referenced his parents having sex in his best supporting actor acceptance speech).

If Caitlyn Jenner is going to become the next governor or California, she'll have to do it without the support of her family. According to TMZ, her sons — Brody Jenner, Brandon Jenner and Burt Jenner — urged her to not run for the job in the upcoming recall election. A source told the webloid the three men are "embarrassed" by the former Olympian and reality TV star's gubernatorial bid. TMZ notes that the three think Caitlyn is nowhere near qualified to lead the state and are upset that she "never took the family's feelings into consideration." However, a source close to Caitlyn said her boys never communicated to her that they thought she was unqualified for the job. Similarly, the Kardashian-Jenner women reportedly won't be hitting the campaign trail for Caitlyn either.

Changes at "The Talk" keep coming, but this time the factors are less dramatic. Co-host Carrie Ann Inaba has taken a leave of absence from the daytime show to focus on her health. "Hi everyone, I wanted to let you know personally that I have decided to take a leave of absence from 'The Talk' to focus on my well-being. I know you guys understand, health is the most important thing," Carrie Ann said in an Instagram video on April 26. "So, I appreciate your support, I appreciate the love and support from 'The Talk' family, and I hope to be back soon. Take care and I'll keep you updated. Thank you." The change comes just two weeks after "The Talk" returned from a month-long hiatus sparked by former co-host Sharon Osbourne's controversial comments in support of Piers Morgan, who attacked Duchess Meghan. 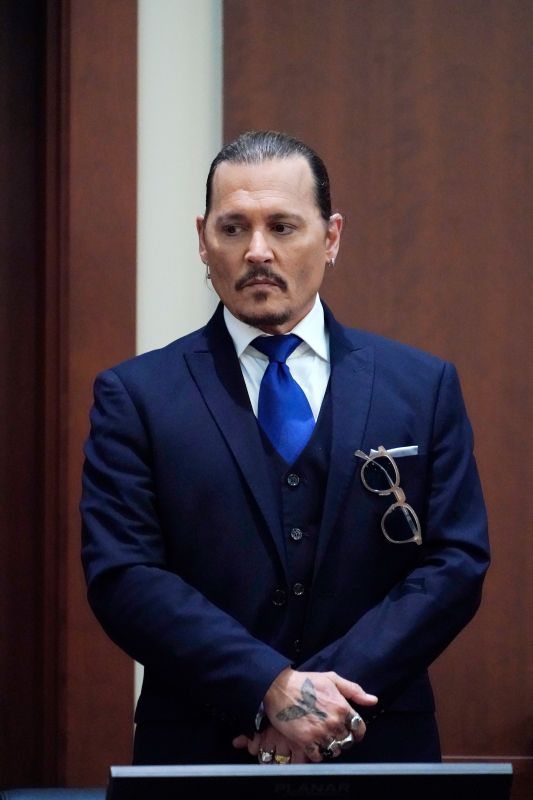