The Madea franchise is going out with a bang with the release of the final Madea movie, "Tyler Perry's A Madea Family Funeral," on March 1. In celebration of the film's release, Wonderwall.com is running down the most unforgettable funeral scenes in cinema. Keep reading to see which movies made the list…

The funeral scene in 1989's "Steel Magnolias" was definitely a tearjerker. Sally Field showed off impressive range as grief-stricken mother M'Lynn Eatenton, who's burying her daughter, Shelby Eatenton-Latcherie. She rants, raves, cries and shouts things that don't necessarily make sense as sadness and anger overcome her. Luckily, her friends come to her rescue in the end, providing a much-needed laugh for M'Lynn and the audience.

The "Live and Let Die" funeral scene is one of the most awesomely cutthroat movie moments we've ever seen. The 1973 James Bond film opens up with a second line funeral procession in the French Quarter in New Orleans. A man watches from the sidewalk and asks a fellow bystander, "Whose funeral is it?" The bystander replies, "Yours," before stabbing the man with a switchblade. The pallbearers then lower the coffin over his body as the jazz band plays on.

The funeral scene in 2009's "Up" was brief but still so heart wrenching! The funeral is in the midst of a flashback montage of Carl and his late wife, Ellie. The scene shows how they meet as children, fall in love, get married, build their home, suffer through a miscarriage and happily grow old together before Ellie gets sick and passes away. Carl is then shown at her funeral looking lost and somber while holding a single blue balloon — the same balloon he surprised her with at the hospital. The feels!

"Four Weddings and a Funeral" is mostly an adorably cute rom-com but, as the title suggests, there is a super-sad funeral scene. John Hannah's character, Matthew, reads a beautiful, heartbreaking W.H. Auden poem at the funeral of his boyfriend, Gareth, after Gareth dies of a heart attack. "He was my North, my South, my East and West. My working week and my Sunday rest. My noon, my midnight, my talk, my song. I thought that love would last forever: I was wrong."

Andy Kaufman made sure to bring his signature light-hearted comedy to his own funeral. In 1999's "Man On the Moon," Jim Carrey stars as the real-life comedian. When he dies from lung cancer, Andy arranges for a pre-recorded, sing-a-long video to be played at his funeral. Family, friends and fellow comedians join in and sing "Friendly World" as a final farewell to Andy.

Liam Neeson's character, Daniel, honored his wife perfectly during the funeral scene in "Love Actually." After his wife dies, Daniel gives a heartfelt eulogy before playing a sweet slideshow of pictures with "Bye Bye Baby" playing in the background. "So, she's going to say her final farewell to you not through me, but inevitably, ever so cooly, through the immortal genius of the Bay City Rollers," Daniel explained.

Movie funerals are typically sad, but sometimes they can be laugh-out-loud funny. In 2007's "Death at a Funeral," the Barnes family gets together to say goodbye to the family patriarch, Edward Barnes. Edward's sons, played by Chris Rock and Martin Lawrence, are blackmailed by their father's lover, Frank, played by Peter Dinklage. After Frank hits his head, the brothers believe he's dead and put him in the casket with their father, but Frank eventually wakes up, hilariously rolling out of the coffin.

The "My Girl" funeral scene might be the saddest in history. Macaulay Culkin's character, Thomas J, is killed after he's attacked by a swarm of bees and suffers a fatal allergic reaction. During his funeral, his best friend, Vada, tearfully runs to his casket and asks, "Wanna go tree climbing, Thomas J?" as her father tries to explain, "He's gone, sweetheart. He's gone." Heartbreaking.

The funeral scene in 2015's "Trainwreck" makes our list thanks to its refreshing honesty. Amy Schumer's character gives the eulogy for her father, Gordon Towsend, at his funeral and doesn't shy away from his flaws and less appealing attributes. "Gordon David Townsend: not that great a guy," she begins. She goes on to say, "He was kind of racist, and homophobic. He was a drunk. He once apologized to me for missing a volleyball game that he was at… I know he probably hurt everyone here. But raise your hand if he was one of your favorite people."

"The Big Chill" is centered around a group of eight old friends who attended the University of Michigan together. They're reunited 15 years later at the funeral of their buddy Alex after he commits suicide. As they all gather in the church and one pal, Karen, starts to play the Rolling Stones' "You Can't Always Get What You Want" on the organ, the feeling that they've all changed, for better or for worse, begins to emerge.

The funeral scene in "Old School" might be one of the funniest of all time. Fraternity members Mitch, Frank and Bernard gather at the cemetery to bury their elderly frat brother, Blue, who died from a heart attack right as he was about to wrestle two topless girls. Will Ferrell's character, Frank, hilariously sings "Dust in the Wind" during the ceremony before shouting, "You're my boy, Blue!"

"The Dark Knight" features an epic funeral scene that is not to be missed. In the 2008 flick, the Joker goes undercover as a police officer at the memorial service of Police Commissioner Gillian B. Loeb, whom he murdered earlier in the film. As the service goes on, the Joker attempts to assassinate Mayor Anthony Garcia and all hell breaks loose.

The funeral scene in 2001's "The Royal Tenenbaums" is quirky and comical, perfectly aligning with director Wes Anderson's style. When the Tenenbaum family gathers to bury their family patriarch, nobody wears black — except for Ben Stiller's character and his lookalike sons, who rock black tracksuits — and the gravestone inscription is hilariously odd: "Royal O'Reilly Tenenbaum. 1932-2001. Died tragically rescuing his family from the wreckage of a destroyed sinking battleship."

Tina Fey, Jane Fonda, Jason Bateman, Adam Driver and Corey Stoll at one funeral? What could be better! The all-star ensemble cast gathered together in 2014's "This Is Where I Leave You," in which they play family members mourning the death of their father and husband. Their quirky family dynamics are on full display at the dad's funeral where Adam shows up late and interrupts the rabbi, calling him by his childhood nickname: "Boner." 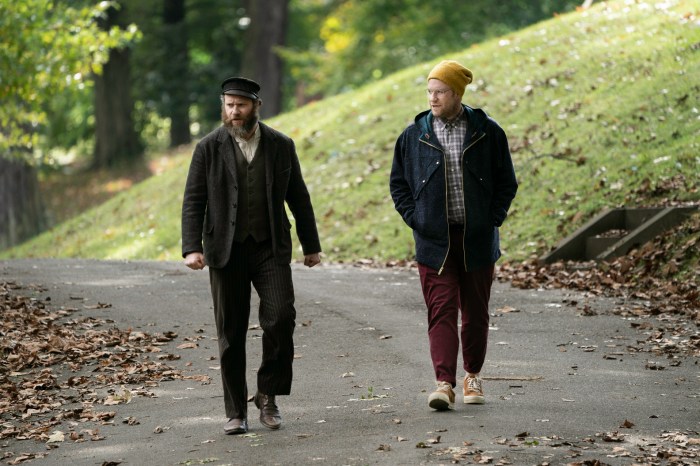