The American Music Awards will air for the 49th time on Sunday, Nov. 21, 2021. To celebrate the night where the best musical artists and their songs are celebrated, Wonderwall.com is rewinding to 2011 to see which stars attended the 39th annual AMAs, and — most important of all — what they wore, starting with this star: Favorite rap/hip-hop artist and favorite rap/hip-hop album winner Nicki Minaj opted for an Oscar de la Renta look for the 2011 AMAs. The performer made a statement in an emerald silk and taffeta gown in a mullet style with a fitted black lace bodice on top.

Keep reading to see fashion from the 2011 AMAs…

Katy Perry was honored at the 2011 AMAs with a special achievement award recognizing her being the first female singer to have five No. 1 singles from one album. She walked the red carpet on her big night in a Vivienne Westwood corset dress and topped off the look with pink hair, a geometrical headpiece and electric blue snakeskin peep-toe heels.

Taylor Swift was a big winner at the 2011 AMAs, which were held on Nov. 20, 2011. The singer took home three awards (including artist of the year) in a sparkly gold Reem Acra gown with her hair in a straight side ponytail that showed off her emerald earrings.

Jennifer Lopez, who won an AMA for favorite Latin artist and performed during the show in 2011, went all out in a long sheer black gown (with a small train!) that gave the illusion of flowers climbing up her body. The dress was asymmetrical, covering one arm and leg and letting the other side go bare.

Presenter Selena Gomez was ultra-glamorous in a pewter satin Giorgio Armani gown in 2011. The Old Hollywood dress featured a plunging neckline, a low-cut open back and a thigh-high slit, which she perfectly styled with loose curls and dazzling cross earrings.

Lady A's Hillary Scott stunned in a classic strapless belted black gown covered in silver sequins. As her band won favorite country band/duo/group, it was fitting how much of a fashion win this look was too!

Ellie Goulding choose a Christopher Kane LBD with a sheer neckline and cut-out waist that showed off her abs back in 2011.

Katherine Heigl turned heads in a plunging black gown with embellished straps that gathered tightly at the waist. The actress, who presented at the show, kept her jewelry minimal, save for tassel earrings.

Mary J. Blige posed for photos before she went on stage to sing "Mr. Wrong" in a strange leopard-print gown that gave the illusion it was melting along the bottom of the skirt and sleeve.

Jenny McCarthy looked prim and proper in a purple bell dress by Victoria Beckham. She weighed down the elegance of the look a touch by pairing it with black ankle booties, but it certainly fits her style.

Vanessa Lachey gave off Vegas bridal vibes in a one-strap white minidress with embellishments on the collar and hip.

No one does ethereal better than Alanis Morissette. For the 2011 AMAs, Alanis picked a flowing black chiffon high-low dress cinched with a skinny belt. Perhaps the best part of her look was her hair, which she wore in a loose fishtail braid.

Old Hollywood on top, new Hollywood on the bottom! Audrina Patridge mixed retro and modern with her hair in dramatic vintage-inspired waves and her body in a suede brown minidress with a midriff cut-out.

Cheryl Hines gave off ice skater vibes in this super-feminine pink frock with a floral bodice and asymmetrical hem.

Sarah Hyland presented at the 2011 AMAs with "Modern Family" TV mom Julie Bowen in a heavily embellished Amen gown with a pewter clutch and peep-toe heels.

Phoebe Price marched to the beat of her own drummer in a trumpet-style white gown covered in busy black and silver jewels and sequins. She topped the dress off with a white fur stole and matching fascinator.

Sara Ramirez was pretty in pink at the Nokia Theatre L.A. Live in Los Angeles in 2011 in a full length long-sleeved gown with a plunging neckline featuring pleats and gathers.

Late singer Christina Grimmie kept her look simple with a short red strapless dress gathered at one side paired with simple silver earrings and black pumps.

Christa B. Allen posed for photographs in a short purple dress that featured lots of tiny pleats throughout. She interestingly added blue-and-purple snakeskin heels and a cream snakeskin cuff.

Presenter Vanessa Marano leaned into a bit of a goth look with this lingerie-inspired black-and-blue lacy frock. 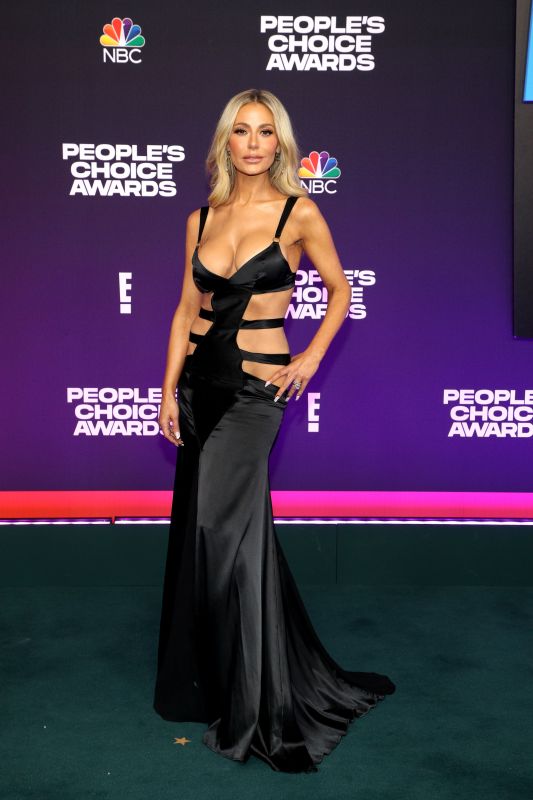