In honor of the 2019 Tony Awards on June 9, Wonderwall.com is rounding up some of the most memorable fashion in Tonys history! First up, one of our all-time favorite Tony Awards looks ever: Lupita Nyong'o's stunning off-the-shoulder Jason Wu gown from the 2016 show. At the time, Jason shared that he had been inspired by the video game Tetris when designing the dress, which featured similar bold colors and layered sequins to give it a textural, 3D feel. Keep reading to see more of the best and worst style moments the Tony Awards red carpet has given us over the years!

The Christian Lacroix gown Anne Hathaway selected for the 2005 Tony Awards almost left us speechless… and not in a good way. From its lime green straps (complete with an unnecessary bow!) to its shiny purply-gold printed fabric that culminated in a train, this one certainly goes down as one of the biggest Tony Awards misses of all time.

At the end of her run as Carrie Bradshaw on "Sex and the City," Sarah Jessica Parker made a Carrie-worthy appearance on the red carpet at the Tony Awards. The Broadway veteran donned this tremendous tea-length tulle confection, which featured a jeweled detail on the strapless bodice — and we loved every minute of it!

One year earlier, Sarah Jessica Parker picked a dress memorable in an entirely different way — for barely being there! At the 2003 Tony Awards, she rocked a mostly sheer dress by Gucci that featured an excessive amount of see-through paneling by 2003 standards and left little to the imagination.

It was surprising to see Scarlett Johansson pop up at the 2004 Tony Awards, and she certainly made a splash in this low-cut, form-fitting black Calvin Klein gown. The red lip and crimped hair were equally memorable elements of this show-stopping look.

Leave it to Rachel Bloom to crack us up, all while earning herself a spot on the worst dressed list! For the 2018 Tony Awards, the "Crazy Ex-Girlfriend" star opted to wear a T-shirt paired with a tulle skirt featuring inexplicable red and black embellishments. Though hilarious, the casual and odd combo was an instant miss in our book.

Amanda Seyfried's Givenchy minidress at the 2012 Tony Awards was a polarizing pick, making it one of the standout dresses that year. On one hand, the purple spaghetti-strap dress with delicate gold embellishments and black lace along the hem was stunning, but that clunky red belt negated the gown's beauty.

Kerry Washington arrived at the 2018 Tony Awards in this fantastic Atelier Versace jumpsuit with cut-outs at the waist and an attached skirt at the back. The funky frock also featured a plunging neckline and intricate jeweled embellishments.

Mary Elizabeth Winstead looked downright regal at the 2016 Tony Awards when she arrived in this incredible long-sleeved, embellished Zuhair Murad ball gown that landed her on every best dressed list that year.

That's a whole lot of lime green! Lauren Graham's 2009 Tony Awards dress added insult to injury with that random black bow dangling amid a sea of shiny green fabric — resulting in one of the worst looks we've seen on a Tony Awards red carpet.

Is Rachel Brosnahan's dress reminding anyone else of Kim Kardashian West's infamous floral 2013 Met Gala look? This Dolce & Gabbana frock featured an all-over floral print just like Kim's "couch dress" and fared about as well with critics. On the bright side? People might have missed this look due to the "Marvelous Mrs. Maisel" star blending in with that floral background at the 2018 Tony Awards!

We loved Cobie Smulders' Schiaparelli number at the 2017 Tony Awards! The star donned a stunning strapless gown by the brand that featured a super-bold, colorful and fun print contrasted against a stark white background.

Jada Pinkett Smith's Marchesa minidress at the 2010 Tony Awards was all sorts of wrong. From the bizarre fan-like layers of ruffle to the frock's awkward length, we expected more from such a fashionista!

This marigold gown on Lea Michele was one of her best looks ever! The former Broadway star wore the slinky Zac Posen design with a sweetheart neckline to the 2010 Tonys.

We're still not quite sure why Kendall Jenner was at the 2015 Tony Awards — and we also don't understand why she selected this shimmery, long-sleeved, coral-colored Calvin Klein minidress.

Long before she made a name for herself on "Grey's Anatomy," Sara Ramirez was a Broadway superstar — she even took home a Tony Award in 2005 for her work in "Spamalot." That year, she arrived in style in this beautiful strapless red gown with a train fit for a winner!

We all know Whoopi Goldberg isn't known for her stellar sartorial choices, but that doesn't make this 2011 Tonys look any less puzzling. The star wore a massive black hat with red-and-green detailing while rocking a printed gown with a matching oversized velvet-trimmed coat. Her T-strap shiny heels over tights really cemented this vintage-inspired look as a big miss.

Where do we even start? The cowl neck, the clashing magenta dress with the red belt detail, the odd layer of fabric underneath — Cynthia Nixon's Carolina Herrera gown at the 2012 Tony Awards was just not a hit with us!

For the 2017 Tony Awards, Sarah Paulson arrived in style! The well-dressed actress opted for this stunning Rodarte gown, which had the illusion of being two pieces. We loved the gown's column silhouette and intricate beading.

Yikes! We're not quite sure what Marcia Gay Harden was thinking when she donned this bizarre Douglas Hannant ensemble at the 2007 Tony Awards. Among the many puzzling elements? An oversized, puffy-sleeved blouse, a bow around the waist, a black skirt with a train and layers upon layers of necklaces. Next!

Sweet and strapless! We loved Idina Menzel's 2007 Tony Awards look! The Broadway superstar showed up in this ivory frock, which featured a fitted bodice and a pretty, pleated full skirt.

When Cicely Tyson arrived at the 2013 Tony Awards, she really arrived! The legendary actress goes down as a winner in the Tonys fashion books for this massive purple confection, which featured long sleeves and gathered ruffles down the entire dress.

Catherine Zeta-Jones had a Cinderella moment at the 2010 Tony Awards in a pale blue design by Versace. The strapless dress featured layers of chiffon and a flowing skirt — and that shade evoked instant comparisons to the Disney princess!

Two things that should probably never go together? Zebra prints and jumpsuits! Diane Lane broke this rule at the 2016 Tony Awards when she wore this disastrous one-piece, sleeveless, wide-legged getup.

Judith Light took home a Tony in 2013 as well as some best dressed awards for this stunning Zac Posen number! We loved this elegant long-sleeved silk gown in stunning white, which culminated in a fishtail design, on the actress.

Surprisingly, the usually stylish model Candice Swanepoel wore one of our least favorite Tony Awards dresses of all time to the 2017 ceremony — an unfortunate Prabal Gurung design with a two-toned bodice and a sparkly, completely sheer skirt that didn't seem to be a fit for the Broadway event.

Kate Mara rocked a memorable Dolce & Gabbana minidress to the 2014 Tony Awards. The stylish design featured padded shoulders and sequin embellishments that set the star apart in a sea of boring ball gowns.

Cate Blanchett made a seriously futuristic statement on the 2010 Tony Awards red carpet! The actress arrived in this shimmering silver Armani Prive pantsuit, and while we loved the menswear-inspired style, that shiny fabric could have been taken down a notch.

A member of Broadway royalty, Sutton Foster arrived at the 2006 Tony Awards in this pale pink dress fit for a princess. We loved the feather detailing and the unique — and nearly invisible! — halter neckline.

Oh, Liza! Liza Minnelli attended the 2009 Tony Awards in this odd all-black ensemble that included a cape-like top with silk detailing. At least it looked sleek?

Pretty in purple! Allison Janney looked lovely at the 2009 Tony Awards in this strapless gown in a shiny purple hue.

Those are some pretty big bows there, Felicity Huffman! The star wore this unfortunate frock with some unnecessary additions to the 2007 Tony Awards. Needless to say, she didn't make the best dressed list that year.

She sings like an angel, and at the 2017 Tony Awards, she looked like one too! Sparkling in Naeem Khan, Sara Bareilles donned this beautiful long-sleeved, shimmering green and silver gown fit for a princess.

Marisa Tomei made a splash in the wrong way at the 2008 Tony Awards. The actress opted for this loud, strapless bright-red Isaac Mizrahi gown dotted with black flowers and a belt. The contrasting colors were an unfortunate combo, and the gown's train just felt excessive.

Shiri Appleby attended the 2007 Tony Awards in this pretty teal number, which featured a super-low-cut neckline and ribbon detailing around the waist and hips.

Crop tops were all the rage in 2015, but on the Tony Awards red carpet? It wasn't the best look for Ashley Tisdale. The star paired her draped strapless crop top with a pair of super-wide-legged trousers by Solace.

No stranger to the Tony Awards, Broadway star Audra McDonald selected a simple yet stunning gown for the 2006 ceremony. We loved her white scoop-neck dress, which featured cap sleeves and delicate ruffling down the entire gown.

We've got two words for you: orange tulle! Fran Drescher committed a major fashion infraction in 2014 when she donned this off-the-shoulder mermaid-style gown crafted from yards and yards of the fiery fabric.

Bernadette Peters stuck with a classic red carpet color — black — at the 2006 Tony Awards but opted for a dress with some unconventional twists. Her one-sleeved ball gown, complete with ruching and a full skirt, paired perfectly with her minimal jewelry and updo. 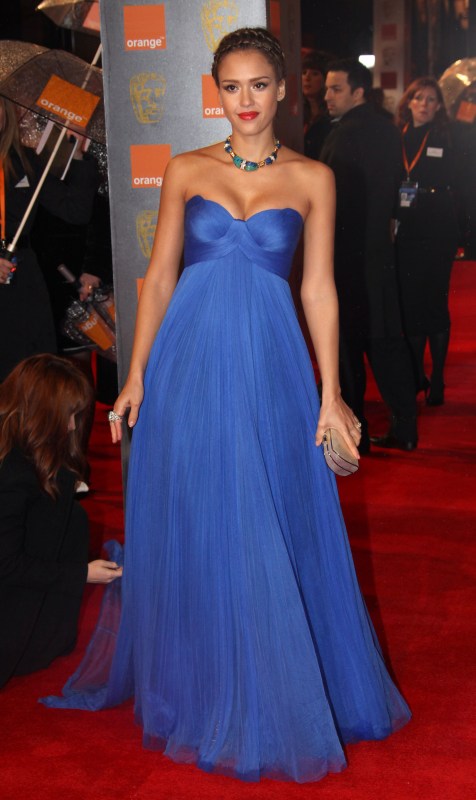 Up Next BAFTAs fashion flashback