Christina El Moussa is single again. After a brief romance with Doug Spedding, the "Flip or Flop" star reportedly called things off after she learned Doug was seeing an ex-girlfriend and had returned to using drugs, according to In Touch. "Christina encouraged him to go back to rehab," a source says. "Christina is the type of person who sees the best side of others, and that's how she was with Doug. Caring about someone does not save someone and Christina knows that. She just wanted to help him." Doug, who was convicted of drug possession in 2011 and has multiple domestic violence charges on his record, is now reportedly getting help at an in-patient treatment center.

Have Bella Hadid and Drake been secretly dating since the summer?

Last week, Yolanda Hadid dodged questions from Andy Cohen about Bella Hadid's rumored romance with Drake, saying only that her daughter and Drake "are friends." A new report from Life & Style claims things are a little more serious between the two. "[They] have been secretly dating since June," the tab quotes a source as saying. On Oct. 9, Drake threw a 21st birthday party for Bella in New York City at Socialista — and Life & Style's insider says "Bella has fallen even harder" since the bash, adding that the relationship "… started out casual, but they're definitely serious [now]. They've been meeting up and going out for romantic dinners." If the latest round of rumors are true, it's apparently news to people close to Drake and Bella — within a few hours of Life & Style's post, the story was already being denied by multiple outlets.

Billy Joel is going to become a dad again

Never say "never." Billy Joel, 68, is expecting his third child. In a recent interview with the Belfast Telegraph, the singer said he and his wife Alexis Roderick are set to welcome another baby next month. Their first daughter Della Rose was born two years ago, shortly after the couple tied the knot. "This one is pretty good. She sleeps through the night. I hope the next one will," Billy said. "I hang out with her and watch her little wheels spin. And she's a hoot. She's a funny kid. She loves to laugh. I like to make her laugh." Billy also shares a 31-year-old daughter, Alexa Ray Joel, with his ex, Christie Brinkley.

Katy Perry's next most memorable look could come from a random fan. At a meet and greet on Monday, Oct. 16, in Louisville, Kentucky, Katy went wild for the Katy-inspired dress and shoes a woman named Samantha Bolton was wearing. Samantha later told TMZ the rhinestone-bedecked ensemble, which featured an image of the eye logo from Katy's Witness tour in sparkly shades of blue, pink and black. Katy asked Samantha to make one for her — and a matching one for her pooch, according to TMZ. She also posted it on Snapchat, which has since sent tons of fans clamoring for their own version as well.

Tristan Thompson had plenty of fan support when his Cavaliers took on the Boston Celtics at a home game in Cleveland for the season opener on Tuesday, Oct. 17. Multiple basketball lovers posted about seeing Tristan's girlfriend Khloe Kardashian in the stands. "I'm trying to yell louder than @khloekardashian every time @RealTristan13 gets on the court," wrote one fan (via Us Weekly), adding the hashtags, "#MightBeImpossible #TrueLove #ForgetTheCurse #CavsOpener," Other fans posted selfies with Khloe, who is reportedly expecting her first child with Tristan, adding lots of "#gocavs" love to their posts. The cheering apparently worked, too. The Cavaliers beat the Celtics, 102-99.

Laura Haddock and Sam Clafin are expecting baby No. 2

Looks like one more stork is headed to Laura Haddock and Sam Clafin's house. When the "Guardians of the Galaxy" star appeared at the Birks Jewellery UK Launch Party at Canada House on Monday, Oct. 16, in London, she wasn't too secretive about the bump under her Emily Wickstead dress. E! News reminds us the public learned Laura and Sam were expecting their first child in a similarly low-key way when Laura arrived at a premiere for "Mockingjay — Part 2" with a pregnant belly. Congrats!

"I don't know because I don't know how to use the mind of a squirrel." That's how Marilyn Manson responded this week on "The Scully Show" when hew was asked what Justin Bieber might have been thinking when he chose to include a photo of the goth singer on his tour merch last year. When Marilyn confronted him for failing to get his OK, Justin reportedly told Marilyn he'd made the singer "relevant again." Eventually, they seemed to bury the hatchet but Marilyn was obviously irked again when the subject came up during the interview. "He's in some sort of sexual religious cult with an Asian version of Dave Navarro, apparently," Marilyn said, according to the Daily Mail. "The guy doesn't wear a shirt … but no, I don't like to fight with girls, so I don't want to fight with Justin Bieber." The show host defended him in his fight with Justin, sparking Marilyn to say, "It is representing rock and roll though, I appreciate the fact that you identify with the integrity that I try to represent with rock music." He continued: "Because if I don't do it, who else is going to? If you want to f— with that, if you tap the cobra, you're going to get the fangs. If you kiss the cobra, you get the venom."

Did Lana Del Rey sing sarcastically about Harvey Weinstein pursuing her back in 2012? The New York Post reports Lana wrote the song "Cola" after she turned Harvey down a few years ago. The song features an apparently facetious Lana singing, "I got a taste for men who are older / It's always been, so it's no surprise / Ah he's in the sky with diamonds and he's making me crazy / All he wants to do is party with his pretty baby … I know your wife, and she wouldn't mind." According to the Post, the lyric about partying with his pretty baby originally called out Harvey by name. "Harvey went bananas and insisted [she] change the lyrics, which she did, removing Harvey's name," said a source. Reps for Lana and Harvey have so far stayed mum on the rumor.

Channing Tatum added himself to the growing list of celebs who have committed to severing ties with Harvey Weinstein and the Weinstein Company in the wake of his sexual assault and harassment scandal. The actor had reportedly been working on a project with the company but decided to call off the film and stand in solidarity with those who have levied sexual misconduct allegations against the producer. "The brave women who had the courage to stand up and speak their truth about Harvey Weinstein are true heroes to us," Channing, who shares a daughter with his wife Jenna Dewan-Tatum, wrote on Facebook this week. "They are lifting the heavy bricks to build the equitable world we all deserve to live in. Our lone project in development with TWC— Matthew Quick's brilliant book, Forgive Me Leonard Peacock— is a story about a boy whose life was torn asunder by sexual abuse. While we will no longer develop it or anything else that is property of TWC, we are reminded of its powerful message of healing in the wake of tragedy. This is a giant opportunity for real positive change that we proudly commit ourselves to. The truth is out— let's finish what our incredible colleagues started and eliminate abuse from our creative culture once and for all."

Ed Sheeran cancels shows as he recovers from bicycle accident

Ouch. Ed Sheeran has canceled multiple shows after reportedly being hit by a car on his bike, according to Us Weekly. "A visit to my doctors confirmed fractures in my right wrist and left elbow that will leave me unable to perform live concerts for the immediate future," he wrote on Instagram on Tuesday, Oct. 17. "Sadly, this means that the following shows will not be able to go ahead as planned: Taipei, Osaka, Seoul, Tokyo and Hong Kong. I'm waiting to see how the healing progresses before we have to decide on shows beyond that. Please stay tuned for more details." He added, "PS – Ed isn't typing this as he has both arms casted/bandaged." Photos on Instagram show Ed currently has one arm in a cast and the other in a sling. 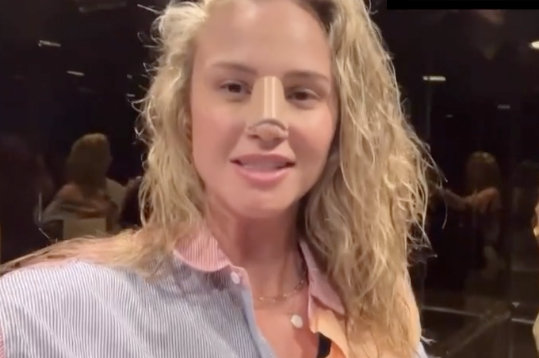