2016 has been a year full of celeb engagements, which means plenty of 2017 weddings are next! Wonderwall.com is breaking down all the weddings we expect to see in the New Year, starting with Rob Kardashian and Blac Chyna. These two have been shopping the idea of a reality TV special to chronicle their wedding. Rob proposed to Chyna in April 2016 and they became parents to daughter Dream on Nov. 10. Keep reading to see more celeb couples who are in wedding-planning mode!

Kate Upton announced her engagement to Detroit Tigers pitcher Justin Verlander at the Met Gala on May 2, 2016. "I'm really excited, he asked me right before [the baseball] season started so we've been keeping it on the down-low for quite a while," she told E! News. "So I'm excited to finally be able to share it with the world."

Brooks Laich has been working on his fitness with fiance Julianne Hough before their big day. The Canadian hockey player and the "Dancing with the Stars" pro-turned-judge got engaged in August 2015.

On Nov. 16, Ricky Martin revealed that he was engaged to Jwan Yosef. He told Ellen DeGeneres, "I proposed. I was really nervous, but I got on my knees and I took out the little metal box. I just had [the rings] in a little velvet pouch and instead of saying 'Will you marry me?' I said, 'I got you something!' Bad!" Ricky continued. "And then he was like, 'Yes?' I said, 'I want to spend my life with you,' and he was like, 'What is the question?' 'Would you marry me?' That's it… It was very beautiful. And then, like, 30 minutes after, I said, 'Wait, did you say yes?' Yes, he said yes." Ricky told People about the upcoming wedding. "This [wedding] is going to be Middle Eastern and Latin crazy all at once," he said. "It's going to be one loud wedding!"

Oscar winner Brie Larson's boyfriend Alex Greenwald proposed in May 2016. Brie had openly gushed about her musician beau at the Screen Actors Guild Awards in January 2016. "Oh man, I mean, he's the other half of the equation — how can you explain support?" she told "ET" backstage. "I mean, it goes beyond anything. He's just my person, he's my best friend."

Rosie Huntington-Whiteley showed off her engagement ring at the 2016 Golden Globes. Rosie and Jason Statham confirmed the exciting news to E! on the award show's red carpet. A source further told Us Weekly that they got engaged while on vacation over the holidays in 2015. Rosie and Jason haven't rushed to get married, but we have a feeling that much like their engagement, this wedding will be a surprise!

Pippa Middleton and James Matthews aren't having a royal wedding, but royalty will be a part of their big day! Duchess Kate's little sister and her financier beau got engaged in July 2016 and have reportedly set the date for May 20, 2017. There are a lot of rumors surrounding their nuptials, including that Pippa wants Adele to perform, that Prince George will be a page boy and Princess Charlotte will be a flower girl, and that her royal sister will do a reading rather than be a bridesmaid so as not to upstage Pippa.

"Mr. Robot" creator Sam Esmail and "Shameless" star Emmy Rossum are expected to walk down the aisle soon! Sam and Emmy have been engaged since August 2015. The bride-to-be told E! that her wedding dress will be designed by Carolina Herrera.

Miranda Kerr confirmed her engagement to Snapchat mogul Evan Spiegel in July 2016. The model's Instagram announcement featured a Snapchat-like filter laid on top of a photo of the ring with cartoon versions of the happy couple. We can only imagine what the Snapchat filter will look like for guests at this wedding!

"Gotham" stars Morena Baccarin and Ben McKenzie revealed their engagement news to Us Weekly on Nov. 29, 2016. If you look closely at this photo, you'll see Morena — who gave birth to their daughter, Frances, in March — showed off her new diamond ring at the 2016 Gotham Independent Film Awards on Nov. 28.

Amanda Seyfried and Thomas Sadoski revealed they were engaged in September 2016. Not long after, the couple had even more happy news to share: In November, the actress showed off her baby bump at a Givenchy event. Neither Amanda nor Thomas have addressed if they will tie the knot before or after the baby is born.

"Jersey Shore" alum Deena Cortese got engaged to longtime boyfriend Chris Buckner in November 2016. The proposal happened during their five-year anniversary vacation to Mexico. We can't wait to see if her wedding turns into a mini "Jersey Shore" reunion!

Jennifer Hudson and David Otunga have been engaged since September 2008, and 2017 could very well be the year they finally wed. Jennifer spoke to Wendy Williams in 2014 about why they haven't walked down the aisle yet. "Well the ring is still there and we will get married one day but again, my thing is, once I get married, I don't believe in divorce. And so when I get married, it's for good, okay? We want to be completely sure we're together and we're happy." Jennifer has been pretty happy lately. She received rave reviews for her portrayal of Motormouth Maybelle on "Hairspray Live."

Jodie Sweetin announced her engagement to Justin Hodak in January 2016. Jodie hasn't had much time to plan a wedding between her stint on "Dancing with the Stars" and "Fuller House" shoots, but we're hoping to see her schedule free up soon so she can walk down the aisle again!

Dave Franco and Alison Brie got engaged in August 2015. Dave told E! that we shouldn't expect a big wedding. "We keep kinda paring it down — to the point we might elope," he said at the premiere of "Neighbors 2: Sorority Rising." "Who knows?"

Maria Menounos and Keven Undergaro were together for nearly two decades before Keven popped the question. He proposed at the end of her appearance on Howard Stern's show on March 9, 2016. Just one month prior, Maria spoke to Wonderwall.com about the hold-up on their wedding. "We just can't agree on what [our wedding] would be when we're in the hypothetical conversation," she said. Now that they've been engaged for several months, it's about time for them to reach an agreement!

Kylie Minogue and Joshua Sasse announced their engagement in February 2016, but they didn't get married in 2016 for a reason. Joshua revealed that he and Kylie won't wed until same-sex marriage is legal in her native Australia. The couple has reportedly remained optimistic that the law will change soon. According to NW magazine, Kylie has looked at Melbourne's St. Paul's Cathedral as a possible venue for their nuptials.

Tory Burch and Pierre-Yves Roussel have been engaged since January 2016. The fashion designer's dress is the most anticipated part of their upcoming wedding.

The Wanted's Tom Parker proposed to Kelsey Hardwick in March 2016, and it was very romantic. He told Hello! magazine about the proposal: "'There was a trail of rose petals leading to the TV where I'd set up a montage of all our pictures from the day we met until now," he said. "I was crying my eyes out at this point. Then at the end it said, 'Here's to the next chapter, turn around,' and when she turned around, I was down on one knee." Let's hope the wedding is just as romantic!

Laura Prepon showed off her stunning engagement ring from Ben Foster at the Los Angeles premiere of "The Girl on the Train" on Oct. 4, 2016. Their engagement news came as a surprise since they've only been dating since July 2016. 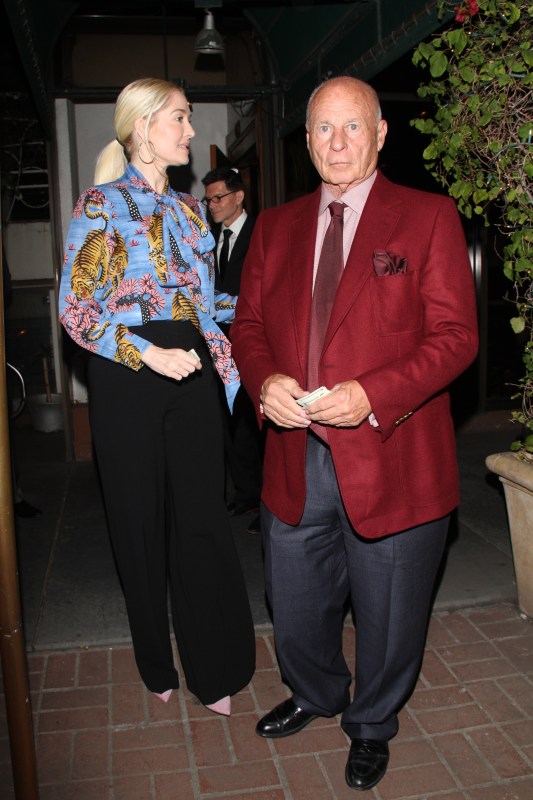