More than 24 hours after Mariah Carey's lip syncing gaff during the live "Dick Clark's New Year's Rockin' Eve with Ryan Seacrest" show, the Twitterverse still can't stop talking about it. Josh Groban, however, seems to wish he hadn't chimed in on Mimi's awkward mistake. He initially shared a sarcastic reference to "It's a Wonderful Life" by tweeting, "Any time one of the greatest voices of my generation lip syncs an angel loses its wings." He later deleted the post, according to E! News. "Deleted my tweets about a certain performance because it was made in humor but taken way more meanly than intended," he explained. "Not out to diss artists. …The problem is, you give Twitter an inch & it takes a mile…transforms it into what feels like bullying & I don't want that," he wrote in subsequent tweets. "For the record," he added, "my point wasn't that great singers never [lip sync]. It was that I don't like when they do." After the show, Mariah dismissed the flub, tweeting "s— happens." Her reps have since engaged in a blame game with producers of the New Year's show.

RELATED: How celebs rang in the new year 2017

Someone replaced the o's in Los Angeles' iconic "Hollywood" sign with e's over the weekend and famous Tinseltown pot fans couldn't be more pleased. "#hollyweed – that's were I get my mail. #merryjane," Snoop tweeted (via GossipCop), picking up on the "Hollyweed" hashtag that took over Twitter after the incident. Rose McGowan was equally pleased and tweeted, 'I love you whomever did this #HOLLYWEED." Joel McHale chimed in on the conversation as well, musing, "I wonder how these guys relaxed after a hard night's work of minor vandalism." The sign has since been fixed.

Bruce Willis and Demi Moore are still in a giving frame of mind. The former couple recently donated a theater they bought together in Idaho back in 1995 to a local theater company that was in need of a permanent home. The gift will allow the Company of Fools theater group to use the historic movie house for their live performances in the town of Hailey, according to the Idaho Statesman.

Sophie Turner rocks out to Joe Jonas' band in Miami

New year, new romance! Sophie Turner joined her rumored boyfriend Joe Jonas in Miami over the weekend, singing along to hits like "Cake By the Ocean" as his band DNCE performed at the Orange Bowl Halftime Show, according to E! News. The pair reportedly started dating in the fall, although between his tour and her "Game of Thrones" responsibilities, we could see less of them together in the next few months.

Frances Bean Cobain and her ex heading to court over guitar

Frances Bean Cobain and her ex are still fighting over her late father's guitar. Now, Frances is ready to go to court over it. The New York Post reports Frances has been trying to negotiate the return of the Martin D-18E Kurt Cobain played at his 1993 "MTV Unplugged" concert from Isaiah Silva since they called it quits in March. Isaiah claims the guitar was a wedding present from Frances to him and has pushed to keep the instrument, which is estimated to be worth more than $1 million. "It's a treasured heirloom of the family," Frances' mom, Courtney Love, has said. "It's not his to take." Frances is reportedly planning to sue.

Angelina Jolie and the kids spend New Year's in Colorado

When in doubt, shop it out! Angelina Jolie took a break from the Hollywood grind for New Year's when she jetted off to Colorado with her kids, Maddox, 15, Pax, 13, Zahara, 11, Shiloh, 10, and Knox and Vivienne, 8, after Christmas. On Friday, Dec. 30, a source told Us Weekly she was spotted perusing the shelves of a local toy store with Vivienne. Prior to their trip, the kids visited with their dad, Brad Pitt, and exchanged gifts. While the actors continue to hash out the terms of their divorce, Brad is asking a judge to seal the court documents for the sake of their children.

Prince William is praising China for pledging to end its ivory trade, calling the move a landmark policy shift that could help protect the species from disappearing. "China's decision to ban its domestic ivory trade by the end of the year could be a turning point in the race to save elephants from extinction," he said ina statement (via the Daily Mail). "I congratulate the Chinese Government for following through on this important commitment. This battle can be won." He went on to encourage the rest of the world to take similar measures with regard to ivory. "We need all countries to step up to the plate and do their part to end the illegal wildlife trade and save our iconic species before it is too late," he said.

The party started a few days before New Year's Eve for Diddy and his son Justin, who celebrated Justin's 23rd birthday with a bash, courtesy of Justin's dad, a Story in Miami on Thursday, Dec. 29. According to the New York Post, guests included French Montana, Diddy's on-again girlfriend Cassie and Johnny Manziel, among others. "Everyone was at a big table drinking tequila and dancing to Travis Scott as he performed," an onlooker tells the New York Post. "Travis made sure to give Justin a special birthday shoutout." 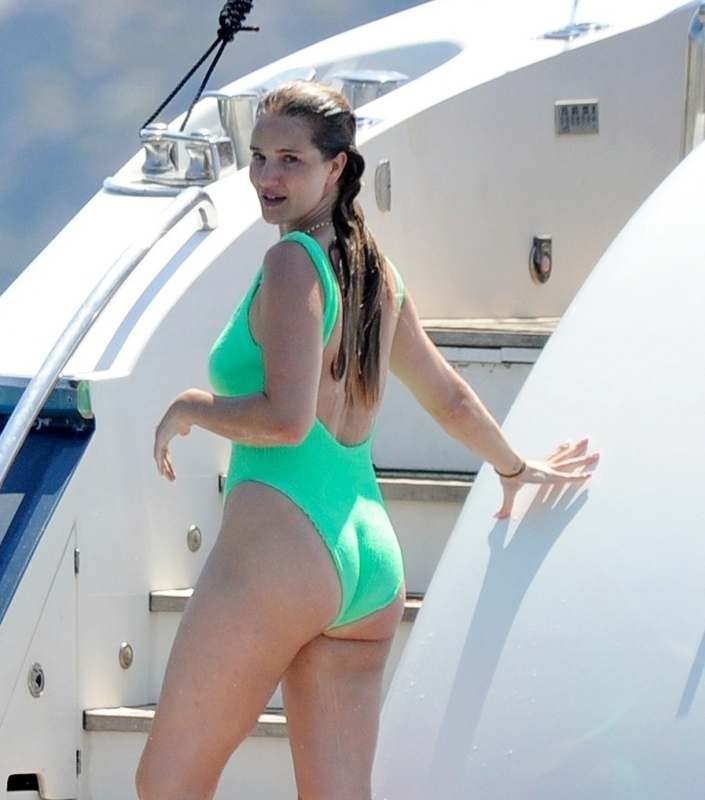