Side-eye much?! While Jennifer Lopez posed for photos at the Met Gala with Donatella Versace, she had some serious shade coming her way from another guest on the red carpet. Photos published by the Daily Mail show Kylie Jenner, standing by her sister, Kendall Jenner, throwing major side-eye at the singer and dancer, who was wearing Versace for the camp-themed event. Kylie was later spotted staring point blank at J.Lo's famous derriere, sparking the Mail to suggest she was mentally "taking notes" on Jennifer's booty, not glaring at Jennifer, a longtime friend of Kylie's sister, Kim Kardashian West. Whatever caused the hilarious moment of apparent scorn (or possible admiration), Kylie's an official contender for staredown of the year!

Lori Loughlin could end up saved from doing hard time thanks to the way the rowing program works at USC. New information from TMZ — along with a USC rowing poster that reads like a joke but is apparently very real ("no experience?" the poster asks, "no problem") — suggests the women's crew team regularly recruits members without experience. That makes Lori's daughters who had no experience rowing prior to enrolling at USC as rowing recruits look a whole lot less suspicious. The tip reportedly came from a former coxswain for USC. And while the alum says recruits are supposed to be students already when they join the team, the tab points out prosecutors will need to prove Lori and her husband's criminal intent, which seems harder given that the poster suggests no experience is necessary to join. From the perspective of TMZ and its sources, Lori and her hubby "have a real shot at getting a not guilty verdict" at this point.

Ha! If Nick Jonas was really channeling the creepy "Game of Thrones" character Petyr Baelish with his Met Gala look as a means of tormenting his sister-in-law, "GoT" star Sophie Turner, he's likely given up by now. That's because Sophie, who recently married Nick's brother, Joe Jonas, had a perfect comeback when Nick teased her on Instagram about the buzz around whether he'd intentionally gone for an ensemble that would make him look like Petyr, aka Little Finger. "Sansa … we must protect the vale. #metgala #littlefinger," Nick wrote alongside a photo of himself with Priyanka Chopra at the gala (via JustJared). Sophie's response? "Quit trying to manipulate me … ugh, I thought you died last season." Indeed.

Did Naomi Campbell have her own 'human wind machine' at the Met Gala?

Speaking of Met Gala ensembles, Nick Jonas' "Notes on Camp" getup may have been the most "Game of Thrones"-inspired at the event, but Naomi Campbell deserves a special shout-out, too. The supermodel was stunning in her caped pink Valentino gown by Pierpaolo Piccioli and lacey white tights. But what really made her stand out was the helper she had on hand, seemingly, to fan her while she posed for cameras. According to Page Six, the assistant was a man carrying a "large, rectangular piece of plastic" he used to blow a steady stream of wind at Naomi. As one party watcher said on Twitter, "Naomi Campbell came to the #MetGala with a human wind machine and that is about as campy as fashion gets."

Now that Duchess Meghan and Prince Harry have welcomed their first child, their family members can't wait to meet the new addition. "[We're] absolutely thrilled and looking forward to seeing them in the next few days as things quiet down," William told reporters at an event on Tuesday, May 7, according to Us Weekly. "I'm very pleased and glad to welcome my brother to the sleep deprivation society that is parenting," he joked, adding, "I wish him all the best and hope the next few days they can settle down and enjoy having a newborn in their family and all the joys that come with that." Kate, who shares three children with William, said that while parenthood can be "daunting" at first, she couldn't be happier about the news. "It's such a great time to have a baby," she gushed. "Spring is in the air. It's pretty great. As William said, we look forward to meeting him and what his name's going to be. It's really exciting for both of them." According to Instagram, Meghan and Harry's son was born in the "early morning on May 6, 2019." Congrats!

'Atta girl! The week before Katy Perry donned her best chandelier outfit and headed to the Met Gala for its Camp: Notes on Fashion bash, she was in Crescent City to perform at the New Or;leans Jazz & Heritage Festival — and she didn't skimp on the food part of Louisiana's cultural heritage. The singer shared an Instagram photo of herself wearing an undercover getup of a floral patterned dress, sneakers and socks and a fuzzy yellow hat while standing in line for a bite from one of the festival's famous food booths. Though she didn't fill fans in on whether she opted for the crispy wings, fried okra, crowder peas or chicken livers advertised by the sign above her head, she did assure them she was on track to behave like a pro Jazz Fester: "if i move like molasses on stage today," she captioned the pic, "it's cause I ate like it was a professional sport yesterday ok #shebeeatinggood #sheaintmissingnomeals #jazzfest." Her pal, Kate Hudson, by the way, was impressed — and jealous. "Wish we were there!" Kate chimed in. According to local New Orleans paper, The Advocate, she also chilled in the traditional jazz tent with friends that day, catching some music and taking a selfie with a little boy whose dad recognized her in spite of her disguise.

Pamela Anderson's advocacy for her friend, WikiLeaks founder Julian Assange, continued this week as she visited him at London's Belmarsh prison, where he remains in solitary confinement while fighting extradition to the U.S. "J.A. is the [world's] most innocent man," she declared on Twitter, sharing a handwritten note. "He is treated as [the world's] most dangerous man in order to make him a criminal. Without him ever having done anything whatever wrong," she continued. "He does not deserve to be in a supermax prison. He has never committed a violent act. He is an innocent person." As Page Six reminds us, Assange was forced out of an Ecuadorian embassy and arrested in April after Ecuador denied his request for political asylum. He's now serving 50 weeks in prison in the U.K. on a bail related matter. He also faces charges in the U.S. for allegedly trying to hack into Defense Department computers."He is a good man, he is an incredible person. I love him, I can't imagine what he has been going through," Anderson told The Sun after visiting him. "It was great to see him, but this is just misrule of law in operation. It is absolute shock that he has not been able to get out of his cell."

Lisa Vanderpump has reportedly 'been bullied off' 'RHOBH'

Is that all she wrote for Lisa Vanderpump and her long-running stint on "Real Housewives of Beverly Hills" After months of whispering about her alleged falling out with cast members over "puppygate," Page Six reports Lisa is dunzo and won't appear on this week's episode. "She was bullied off the show," a source told the tab. "[Bravo] is trying to stretch it out to make it seem like she's around. Lisa's not in it. All the other women will talk about her in the episodes, and they'll promote [the show] to appear as if she's in it, because she's the star. But she didn't film with them." Reps from the network declined to comment. According to Page Six's source, there's still some unused footage of Lisa that's expected to air later in the season.

For more than a year, a man Giada De Laurentiis does not know has tried to get in touch with her regarding his alleged love for her and the child he claims to have given her. Now, the celebrity chef is working on her next move to keep him away from her. The Blast reports Giada filed for a temporary restraining order last week, telling the court the man has been harassing her, telling her he loves her and referring to her daughter (and to a check he claims to have been given by her). She hired a private investigator to look into the matter, she says in the docs, and was able to inform the man she planned to contact the authorities if he didn't leave her alone. He reportedly replied by saying that "as a father he had a right to see his child if he wanted," according to The Blast. Eventually, she says, police got involved and told him to stop contacting her, which he allegedly said he would do. Instead, he reportedly continued trying to reach her, the P.I. with messages like, "It would mean a lot to me to see her again and I think she feels the same way. So if you want to make G happy — let us see each other and talk." It's unclear why, but after filing the order, Giada and her laswyer failed to appear in court for a hearing. The requesty for the order was later dismissed.

In her new Netflix show, "Dead To Me," Christina Applegate's character undergoes a double mastectomy, just like Christina did in 2008. As the actress recently explained to USA Today, that was no coincidence. "It wasn't clear to me sometimes why Jen was so angry and broken. There had to be some underlying reason," she told the paper (via Page Six), explaining that she added the detail about the surgery to make the character more relatable. "Plus, it hasn't really been discussed on shows before; I don't think there's a lot of characters out there with double mastectomies. But I went through it, and it's a horribly painful process – emotionally, spiritually, physically – and I never really talked about it. I thought this was my chance to tell a little bit about me, but also all the women that have gone through that," she continued. "I think about it every day," said Christina, who had the surgery after her mother was diagnosed with breast cancer. "Girls who go through this, we say to each other, 'Yep, it's been 10 years,' but you're never not aware that that's something you've been through. Everything looks different. You have to shower and you're like, 'Oh, there they are. That happened.'" 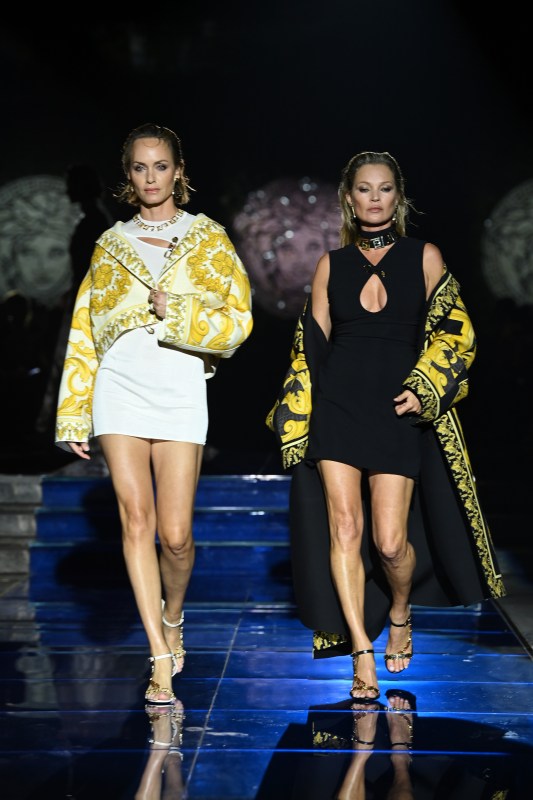