Larry King's widow, Shawn King, isn't just contesting his most recent will, which she was left out of. She's also asking to be named the administrator of the late TV icon's estate. New court documents viewed by ET on Friday, Feb. 19, show Shawn essentially wants the court to recognize an official will Larry had drawn up in 2015 rather than the handwritten, secret one he updated in October 2019, two months after he filed for divorce from Shawn (the divorce was never finalized). In his 2015 will, Larry nominated Shawn to be the executor of his estate, ET reports. The updated will removed Shawn entirely and named his five children as equal beneficiaries of his estate. Larry's son, Larry King Jr., however, has indicated he wants to be the estate's special administrator, having already filed an emergency petition. Shawn, meanwhile, is arguing that the newer will should not be honored because it was never filed unlike the 2015 will. She also suggests Larry Jr. was involved in secret, seemingly self-serving financial maneuvers prior to his father's death and says the estate is only worth about $350,000 — not the $2 million Larry Jr. claims as its value. She maintains she has "the most knowledge" of Larry's businesses and assets. Larry and Shawn had been married for 22 years when he passed away on Jan. 23. In a report published Friday, a family law expert said there's a good chance the handwritten "holographic" will, as Larry's 2019 will would be deemed, won't stand. Attorney Walter Melcher predicts that instead, Shawn lawyers will argue "Larry did not have the capacity to draft a will" by late 2019, given his many health issues.

During a video chat interview with Pamela Anderson and her new husband Dan Hayhurst for the British talk show "Loose Women" on Friday, Feb. 18, one of the hosts recalled that Pam once said, '… in the arms of the man I love is exactly where I should be," before joking, "I didn't think we were actually going to see you in the arms of the man you love!" But that's just where she was when the couple called in to the show — live, from their bed at Pam's place on Vancouver Island in Canada. "We haven't left here since Christmas Eve," said Pamela who tied the knot with Dan on Dec. 24. They went on to share new details about how they met ("He was working here and I got stuck here during COVID and we stuck together," she said with a laugh) and how they came to spend the coronavirus pandemic together ("I've been home for the last year and a half renovating," she explained, adding that "Dan and his kids are living here too"). The couple also opened up about their surprise wedding. "We prefer to be by ourselves but it would have been nice to have some people here," Pam admitted. "Our witnesses were the First Nations people who came to do our blessing and get rid of our demons." Dan later attributed their spark to their being mutually irresistible to one another. Said Pam: "He's the kinda guy I would have met if I didn't go round the world and get crazy. It's nice to be with a real man who can actually change a lightbulb. He's useful. It's a new thing."

RELATED: Stars who got engaged more than once

Are Prince Harry, Duchess Meghan pushing back at palace statement on their future service?

As royal watchers predicted earlier this week, Queen Elizabeth announced sooner than expected that Prince Harry and Duchess Meghan will not return as working members of the royal family. The couple's unprecedented arrangement — in which they left their posts as senior royals — was on a probationary or trial period set to end March 31. But just a few days after they announced they're expecting their second child (and a few weeks before they're slated to discuss their departure from the crown in an interview with Oprah Winfrey), Buckingham Palace released a statement detailing their future plans. "The Queen has written confirming that in stepping away from the work of the Royal Family it is not possible to continue with the responsibilities and duties that come with a life of public service," the statement read. "While all are saddened by their decision, the Duke and Duchess remain much loved members of the family." Harry and Meghan released a statement, too — and BBC Royal Correspondent Jonny Dymond suggests it runs counter to what the palace has said. "As evidenced by their work over the past year, the Duke and Duchess of Sussex remain committed to their duty and service to the UK and around the world, and have offered their continued support to the organizations they have represented regardless of official role," the couple's rep said, adding, "We can all live a life of service. Service is universal." Going forward, Harry will continue with his work in support of the Invictus Games, the Wounded Warrior Project and a handful of other organizations. Meghan will also continue to work with some but not all of her patronages.

After months of rumors, Kim Kardashian West has finally filed for divorce from Kanye West. TMZ first reported the news on Friday, Feb. 19, and it sounds like both Kim and Kanye already have most of their plans in order as they begin the process of making a split that's been a long time coming official. The pair, who share four children and a combined net worth of $2 billion-plus, according to Forbes, have a prenup in place and are already pretty "far along in reaching a property settlement agreement," TMZ's report claims. Kim is expected to request joint legal and physical custody of their little ones. The update comes one day after People reported Kanye "knew" the marriage was over, but was still feeling "anxious and sad."

If you haven't used the confused (or concerned) emoji yet today, now's your chance … Zooey Deschanel and Michael Bolton — of '80s, "How Am I Supposed To Live Without You" soft rock-turned Lonely Island parody song fame — have announced they're teaming up to host an updated, celeb-rified take on "The Dating Game" for ABC. And yep, it involves Michael doing the parody song thing. "So excited to announce that I'll be hosting #TheCelebrityDatingGame alongside Michael Bolton on @ABCNetwork!" Zooey shared on social media this week. "What is it, you ask? Why, it's the classic dating game you know and love but with a modern spin! Michael and I will be matchmakers, setting up hopeful daters and surprise celebrity suitors." In a press release, ABC explains the format this way: "… each episode follows two celebrities who each pick one lucky suitor from a hidden panel of three bachelors and/or bachelorettes based on answers to a variety of questions. But there's a twist! The celebrity identities will remain a mystery to their suitors, who are given clues via hilarious parody song performances by host Michael Bolton." No release date has been announced yet.

Kacey Musgraves: Texas multi-tasker! As millions of people in the singer's home state struggled through days without power, clean water or heat during this week's Winter Storm Uri, Kacey did more than just send thoughts and prayers to those in need. She set up a fundraiser to support "Texans affected by the storm and also to homeless immigrants seeking shelter and food," while taking a dig at Sen. Ted Cruz, who sparked widespread outrage when he jetted off to Cancun for a vacation, rather than staying in Houston to help his constituents. Amid news of the senator's gaffe on Thursday, Feb. 18, Kacey tweeted, "*makes 'CRUZIN FOR A BRUZIN' tees * donates profits to Texans in need," then added, Link coming soon. Don't RUN OFF anywhere…" Later in the day, she returned to Twitter, this time with an online sd=hop link to the aforementioned T-shirts, which her website says will directly support Feed The People Dallas, Casa Marianella and the American Red Cross of Central & South Texas. Referencing a lyric from her song "Slow Burn" — "Texas is hot, I can be cold" — Kacey quipped, "Texas is cold, I can be cold." The white shirts are available through Sunday and will ship in March.

Cloris Leachman's cause of death revealed

"Mary Tyler Moore Show" alum Cloris Leachman died of a stroke, according to her newly released death certificate, but COVID-19 was also "a significant" and contributing factor, ET reported on Thursday, Feb. 18. (The outlet noted that the virus did not cause the stroke.) Cloris passed away on Jan. 27, at the side of her daughter Dinah Englund, who now has her mother's ashes at her home in Encinitas, California. Initial reports cited "natural causes" as her cause of death. Long celebrated for her humor as well as her acting skill, the 94-year-old, Oscar and Emmy Award-winning actress appeared in more than 100 TV shows and films over the course of her long and prolific career. "Cloris was insanely talented. She could make you laugh or cry at the drop of a hat," Mel Brooks shared following her death. "Always such a pleasure to have on set. Every time I hear a horse whinny I will forever think of Cloris' unforgettable Frau Blücher. She is irreplaceable, and will be greatly missed."

Cameron Diaz is 'not looking to' ever make a movie again

Cameron Diaz hasn't appeared on the big screen since 2014's "Annie," and that's just fine with her. In fact, when she was asked about her future in film on the "Quarantined With Bruce" radio show this week, the new mom and wine entrepreneur sounded almost surprised to even be asked about it. "Will I ever make a movie again? I'm not looking to, but will I?" she asked, according to CNN. "I don't know," she mused. "I have no idea. Maybe. Never say never!" Cameron continued. "But I couldn't imagine being a mom now where I'm at as a mother, with my child at her first year, to have to be on a movie set that takes 14 hours, 16 hours of my day away from my child. I just feel so blessed that I get to be here now with my child and, you know, get to be the mother that I get to be." Cameron, 48, welcomed her first child, Raddix, with husband Benji Madden, just over a year ago. She also launched her first wine label, Avaline, with Katherine Power. As 2021 gets underway, she said those responsibilities continue to be her main focus: "Avaline is the only day-to-day work that I'm doing other than being a wife and a mother which … really has been the most fulfilling part of my life so far."

Sofia Vergara is joining Kylie Jenner, Jennifer Lopez and a slew of other stars in launching a beauty venture. The actress is reportedly working on the new line with business partner, Luis Balaguer, Spain's Cantabria Labs and L'Oreal alum Chris Salgardo, according to WWD (via ET). Sofia, 48, already has her own, size-inclusive fashion line, which she launched back in 2019. No word yet on when the new range will be hitting stores. 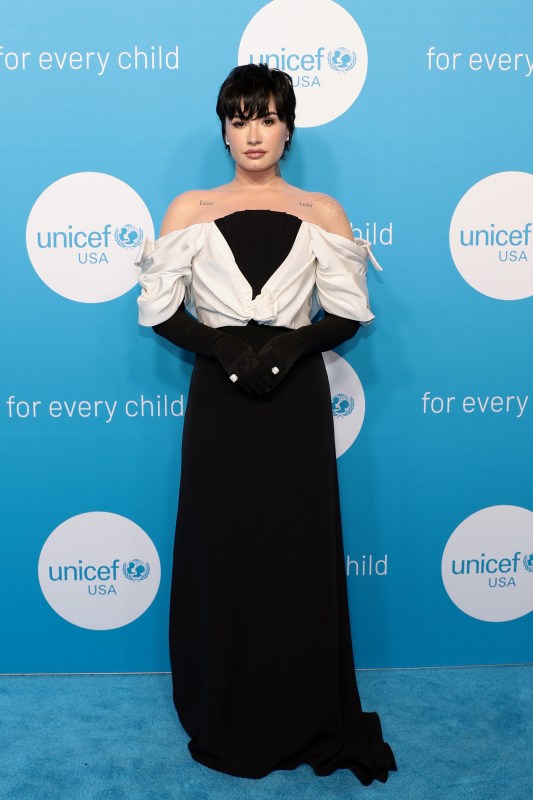