Happy birthday, Harry Styles! In honor of his 27th birthday on Feb. 1, 2021, Wonderwall.com is rounding up some fun facts about the pop star, actor and former boybander that you might not know (but should!). Keep reading to learn more about the British heartthrob…

RELATED: One Direction and more boy bands: Where are they now?

1. His mom submitted his "X Factor" application after he had second thoughts

He almost didn't send in his "The X Factor" application. Though the British reality show ended up making Harry Styles a household name in 2010, the then-16-year-old student had second thoughts about signing up to try out. His mom is the one who submitted his application and pushed him to audition. After his audition (to Stevie Wonder's "Isn't She Lovely"), Harry was eventually selected to be part of a five-person boy band that called themselves One Direction and ultimately took third place on the show before signing with judge and music exec Simon Cowell… and the rest is history.

2. He's written songs for other superstars

Did you know Harry Styles has written songs for other music stars? Yep, he penned "Just a Little Bit of Your Heart" for Ariana Grande and co-wrote a song for Michael Buble with fellow pop star Meghan Trainor.

3. He cut off his famous locks for a very good cause

One thing Harry Styles has always been known for? His fabulous hair! But when the pop star landed a role in Christopher Nolan's 2017 period war film "Dunkirk," he had to part ways with those luxurious tresses. Since he had to make the change, Harry made sure his famous hair supported a good cause: In 2016, the singer donated his hair to a British organization that makes wigs for kids who've lost their hair after cancer treatments, the Little Princess Trust. Of the big change, Harry later told radio host and pal Nick Grimshaw during a BBC Radio 1 interview, "I felt very naked for a while." Fun fact: The exact moment he chopped off his previously shoulder-length tresses aired during his Apple Music special "Harry Styles: Behind the Album."

4. He's not only a handsome, talented singer… he's funny too!

Harry Styles isn't just a good-looking and talented singer — he's also a really funny guy! He's been known to fill in for late night host pal James Corden every now and then, taking over his hosting gig on CBS's "The Late, Late Show," and pulls in just as many laughs as the professional comedian! Harry most recently took over hosting duties for James in December 2019 and interviewed ex-girlfriend Kendall Jenner on the CBS show.

5. He came up with the name One Direction

You have Harry Styles to thank for the name One Direction. He suggested it to his new bandmates on "The X Factor" and they loved it. Back in 2012, Zayn Malik confirmed the moniker's origins during an interview with a radio station in Phoenix, explaining, "Basically we just came up with the idea to make loads of names up and it was one of the first names Harry came up with. He just texted it to us and we were like, 'Yeah, I like that, it's cool.'"

6. His first public fling was with an older woman

One of Harry Styles' first public relationships was with a much older woman. Back in October 2011 when the singer was 17, he began a short relationship with Caroline Flack, who at that time was hosting a show about "The X Factor" called "The Xtra Factor." Caroline — who'd previously dated Prince Harry and went on to date other British celebs before her untimely death at 40 in 2020 — was 14 years older than the One Direction star when they started hooking up. Which brings us to our next fun fact…

7. And so is his latest romance!

Ten years later and Harry Styles is dating another older woman — Olivia Wilde. He met the actress-director, who's 10 years his senior, while working on her upcoming thriller, "Don't Worry Darling," in 2020 (Olivia's directing, Harry's starring). Reports confirmed the duo kept things professional but fell for one another on set. Photos of the couple attending a wedding together while holding hands set the internet ablaze in January 2021, though insiders claimed the couple weren't doing much to hide their relationship prior to that while filming.

8. He has a penchant for bold and gender-bending fashion

His fashion makes headlines! Instead of opting for boring black suits like so many stars, Harry Styles likes to push the envelope when it comes to his looks. He's been known to rock outlandish Saint Laurent and Gucci getups and doesn't shy away from a bold floral print or bright colors or patterns and even adopted a necklace made of pearls as his signature accessory. In 2019, he opened up about his unique taste and penchant for women's fashion in The Guardian, explaining, "What women wear. What men wear. For me it's not a question of that. If I see a nice shirt and get told, 'But it's for ladies.' I think: 'Okaaaay? Doesn't make me want to wear it less though.' I think the moment you feel more comfortable with yourself, it all becomes a lot easier."

9. One Direction wasn't his first band

He was in a band before One Direction! When Harry Styles was just 14, he was the lead singer for a group called White Eskimo. The band won their school's battle of the bands competition and once even performed at a wedding!

10. He inspired a sitcom

His life inspired a sitcom! Yep, when Harry Styles started making it big in One Direction, he lived in the attic of pal Ben Winston and Ben's wife, Meredith, for nearly two years. The odd arrangement inspired the short-lived CBS comedy series "Happy Together" starring Damon Wayans Jr. and Amber Stevens West. The character inspired by Harry was played by Felix Mallard.

11. He also inspired a book series and movie!

The 2019 drama "After" starring Josephine Langford and Hero Fiennes Tiffin is based on the book series of the same name, which originated as Harry Styles fan fiction. Author Anna Todd first published the tale on the fan-fiction site Wattpad, though the character name Harry Styles was changed to Hardin Scott when the books were published. The film currently has a sequel in the works.

12. He had an interesting high school job

You'll never guess one of Harry Styles' first jobs! Though he found fame at 16 after appearing on "The X Factor," he had a very normal teenage gig first: He worked in a bakery. Yep, the future superstar was an employee at the W. Mandeville bakery in his native Holmes Chapel, England. His old boss, Simon Wakefield, only has lovely things to say about Harry, telling the Daily Mirror back in 2013, "He was the most polite member of staff we've ever had. Customers really took a shine to him." Harry stopped by his old place of employment to film a segment for the 2013 One Direction documentary "One Direction: This Is Us."

13. He has some surprising inspirations

You might be surprised by one of Harry Styles' main inspirations. The British pop star credits Canadian country music singer Shania Twain with influencing him in both the music and fashion departments. His mom's musical taste is what exposed Harry to Shania, and he's been known to sing a Shania cover or two on tour. Another one of Harry's biggest inspirations now calls him her "adopted son." See who that is next…

The legendary Stevie Nicks considers Harry Styles her "love child." Yep, the Fleetwood Mac frontwoman told Rolling Stone in 2019, "He's Mick [Fleetwood]'s and my love child. When Harry came into our lives I said, 'Oh my God, this is the son I never had.' So I adopted him." The love is reciprocated: Harry was on hand to pay tribute to Stevie at her induction into the Rock and Roll Hall of Fame as a solo artist in April 2019, and he's performed her hit "Landslide" alongside her multiple times.

15. He featured an ex-girlfriend on his latest album

Though he's not super-open about his private life, Harry Styles did give fans a glimpse into his last relationship via the song "Cherry" in 2019. At the end of the tune on his second solo album, "Fine Line," he used a voicemail from his ex, French model Camille Rowe, in which she can be heard speaking in French. He opened up about the inclusion to DJ Zane Lowe in November 2019, explaining that he got her permission before adding it to the song.

He's a sucker for a romantic movie! Harry Styles has admitted to being a big fan of Nicholas Sparks flicks, namely "The Notebook." In 2017 while being interviewed by filmmaker Cameron Crowe, Harry explained that he loved to unwind with rom-coms while recording his self-titled debut solo album in Jamaica. 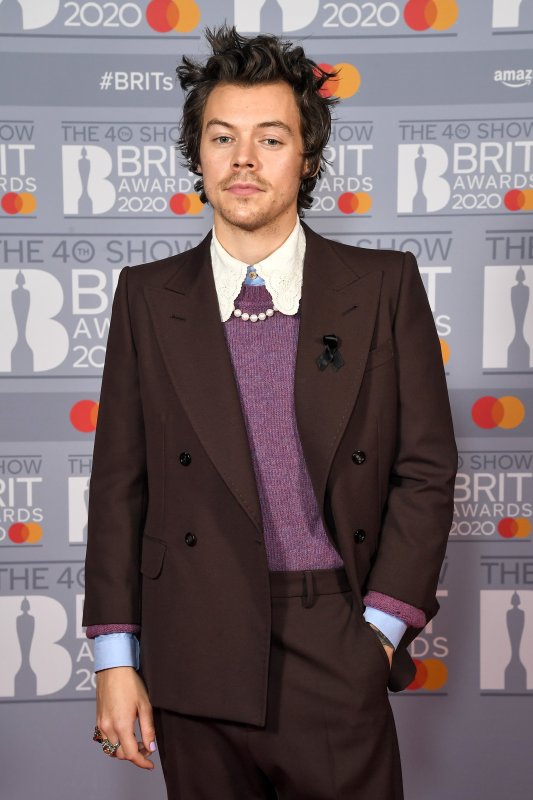