Harry Styles is not afraid to have fun with fashion. In recent years, the former One Direction member has transformed his identity from boybander to mature musician with a flare for wild style. Wonderwall.com is taking a look at some of Harry's most memorable and playful looks… starting with this ensemble he wore to open his 2021 U.S. tour… Harry's stylist, Harry Lambert, confirmed that the singer-actor donned a custom Gucci look — bold magenta pink trousers and a glittering red-and-pink tinsel-fringe vest, minus a shirt — for his first "Love On Tour" concert date at the MGM Grand Garden Arena in Las Vegas on Sept. 4, 2021.

Keep reading to see the outfit in action, plus many more of Harry's best and wildest looks…

RELATED: Stars who fell for their directors

Harry Styles sure knows how to make his Gucci look move! The music star's sparkling red-and-pink fringed vest, which he paired with magenta trousers and beige ankle boots, is seen in action during the opening date of his "Love On Tour" concert trek at the MGM Grand Garden Arena in Las Vegas on Sept. 4, 2021.

Harry Styles performed at the 63rd Annual Grammy Awards in March 2021 wearing a custom black leather Gucci suit, minus a shirt, accessorized with a green boa and plenty of tattoos.

Keep reading to see Harry take off the boa…

RELATED: Things you don't know (but should!) about singer-actor Harry Styles

Harry Styles opened the 63rd Annual Grammy Awards in Los Angeles in March 2021 wearing a custom Gucci leather suit — minus a shirt — accessorized with a green boa and plenty of tattoos.

Harry Styles took the stage at the 2021 Brit Awards in London to accept an award wearing a brown, orange and cream wool and silk jacket and pants in a macro framed sequence print from Gucci's Aria collection with some low-top sneakers with an oval enamel detail.

Keep reading to see the statement accessory Harry brought along…

Harry Styles posed with his new Mastercard British Single Award for "Watermelon Sugar" — and a brown leather Gucci purse with a bamboo handle — backstage at the Brit Awards in London on May 11, 2021.

Harry Styles made heads turn at the Sony Music BRIT Awards afterparty in London in February 2020 when he arrived in a bright yellow three-piece suit from Marc Jacobs' spring 2020 womenswear collection paired with a lavender shirt and scarf.

That yellow women's collection suit was one of three attention-grabbing looks that Harry Styles wore on BRIT Awards night in London in February 2020. He hit the red carpet in a granny-inspired ensemble — a brown Gucci suit with a lavender wool sweater (that matched his manicure), a lace collar bib and a string of pearls that became his signature in 2020. Keep reading for a closer look at his shoes…

Harry Styles showed off a pair of custom-made black Gucci Mary Janes as he arrived at the BRIT Awards in London in February 2020.

For a SiriusXM and Pandora performance in New York City in February 2020, Harry Styles wore wide-leg blue trousers with a subtle stripe and a white-striped button-down underneath a yellow sweater vest covered in big blue polka dots.

A creamy white head-to-toe lace ensemble by Gucci — complete with suspenders, matching lace gloves and his signature pearls — was Harry's sartorial choice for his performance of "Falling" at the BRIT Awards in London in February 2020.

"I used to wear all black all of the time," Harry Styles — who wore a powder blue suit with a sheer aqua shirt to perform in the 2017 Victoria's Secret Fashion Show — said in a 2019 interview with Dazed magazine. "But I was realizing [dressing up] was a part of the show, if you will. Especially when performing. So I think [for] the people I have always admired and looked up to in music, clothes have always been a big part of the thing."

Harry Styles delivered another colorful look courtesy of Gucci — a blue long-sleeved sweater atop a scallop-collared shirt and green pants accessorized with white shoes and a necklace made of pearls — during a visit to the SiriusXM Studios in New York City in March 2020.

As a Met Gala co-chair in May 2019, Harry Styles had to bring it. The singer delivered on the "camp" theme in a lacy, frilly and sheer black blouse with a big bow paired with classic black trousers — all designed by Gucci — and a pair of heeled dress shoes. As far as jewelry, he wore a fistful of rings and a single pearl earring.

At the Gucci Cruise 2020 fashion show in May 2019, Harry Styles wore a cream-colored suit with a ribbed tank top underneath. He accessorized the look with an oversized clutch, rose-colored sunglasses and fingers full of chunky rings and pastel polish.

Harry Styles loves a unique suit, like this red-and-white plaid ensemble by Vivienne Westwood that he wore with a stacked-heel Gucci snaffle loafer in London in May 2017.

Pink, blue and maroon pieces by Gucci accessorized with a black-and-white polka-dot tie was the look du jour when Harry Styles performed on the "Today" show in New York City in February 2020.

Harry Styles arrived at the BBC Radio Live Lounge in December 2019 wearing a Gucci T-shirt that he helped design with the fashion house's creative director, Alessandro Michele — it featured his name in a heart plus the name of his latest album, "Fine Line." He paired the tee with a custom Bode jacket cut from an antique wool blanket and added wide-leg trousers and blue nail polish and what's now become his signature accessory — a necklace made of pearls.

At the July 2017 premiere of the film in which he made his acting debut, "Dunkirk," Harry Styles wore a classic black suit and white shirt. But in typical Harry, uh, style, he added red Chelsea boots embroidered with dragons, giving him that necessary flare.

During a night out in London in October 2014, Harry Styles wore a black blazer, slim-fit trousers and a heavily ruffled white shirt underneath.

In May 2015, Harry Styles picked a sheer leopard-print top with a loose bow and paired it with a blazer and black hat to see the Rolling Stones in concert in Los Angeles. "What women wear. What men wear. For me it's not a question of that. If I see a nice shirt and get told, 'But it's for ladies,' I think: 'Okaaaay? Doesn't make me want to wear it less though.' I think the moment you feel more comfortable with yourself, it all becomes a lot easier," he told the Guardian in 2019.

Another night out, another blouse: Harry Styles has shown a love for the shirt-and-bow style over the years. In June 2015, he wore the combo featuring two clashing patterns under a black blazer for a night out at Lou Lou's club in London.

In September 2015, Harry Styles headed out to London's Lou Lou's club again, this time in a loud geometric-print suit.

British crooner Harry Styles combined two of his loves — floral prints and custom suits — in this Gucci outfit, which he wore to perform in San Francisco in September 2017.

King of hearts — or a total jester? At the iHeartRadio Music Festival in Las Vegas in September 2017, Harry Styles walked the red carpet in a navy-and-red printed-velvet Gucci flared-leg suit with a white blouse with a big bow underneath. "I had never really done flares before. And it was really fun," Harry Styles told Dazed magazine in 2019 of how he developed a penchant for flared pants. "I just kind of started wearing more and more of it, and at the same time just becoming a lot more comfortable in myself."

Harry Styles got into the Halloween spirit while on stage at the Hollywood Bowl in October 2017 in a bright orange suit with a black-bowed blouse.

Harry Styles took his suits to the next level when he wore this bold metallic purple paisley-print double-breasted look at the ARIA Awards in Sydney in November 2017.

"Just going on stage in a nuts suit with a bunch of sequins makes you feel good, and then you want to play," Harry Styles told Dazed magazine of his performance style in 2019. For a 2018 Halloween party, he kept to the sequin theme, wearing a glitzy Dodger's uniform costume — he went as 1975-era Elton John — with rose-colored square sunglasses.

For pal Stevie Nicks' induction into the Rock and Roll Hall of Fame in March 2019, Harry Styles selected a bright blue double-breasted velvet suit (with flared pants, of course) and white boots.

In May 2017, Harry Styles performed on "The Late Late Show with James Corden" in a double-breasted green pinstriped jumpsuit by designer Charles Jeffrey. "I definitely feel lucky to be in a group of people, working-wise, and friend-wise, where they are very free-thinking," Harry told Dazed magazine in 2019. "Everyone is open to be themselves and it's made me feel me feel more comfortable to try different things and have a bit more fun."

Never one to shy away from color, Harry Styles went for reds and pinks when he chose a suit with a cropped jacket for his performance of "Watermelon Sugar" on "Saturday Night Live" in November 2019.

The king of florals went dramatic in this red-and-black look when he performed at Radio City Music Hall in September 2017. Ever loyal to his favorite design house, Harry Styles' slim pant suit and loafers were all by Gucci.

Harry Styles has seemingly endless floral print suits, like this blue-and-gold one he wore to a Los Angeles performance in September 2017.

Harry Styles wore a brown striped tee underneath a green embroidered shirt, brown corduroy flares and black Vans sneakers — and accessorized with his signature necklace, a black Gucci crossbody bag and his signature fistful of rings — during a visit to the the BBC Radio 2 studios in London in February 2020.

Harry Styles went for a more grandfatherly look while out and about in New York City in November 2019: He wore a sheep-printed sweater vest over a collared shirt, which he paired with wide-legged pinstriped pants and pink boots. 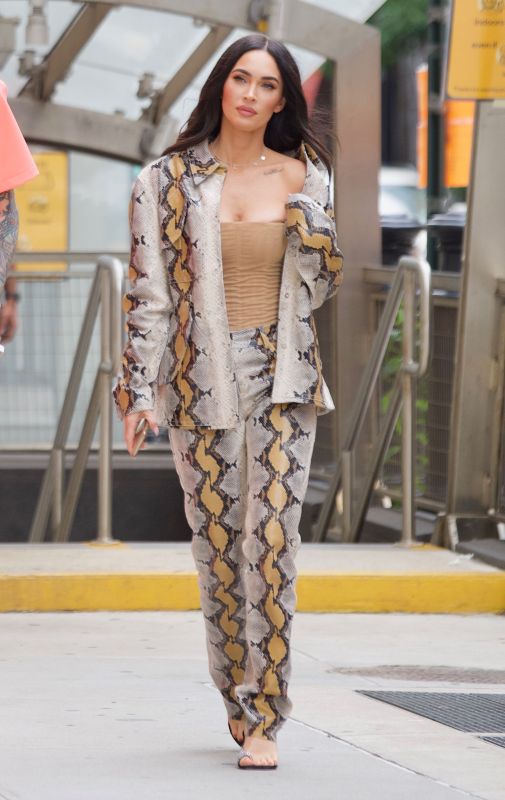 Bella Hadid is mad for plaid in NYC, plus more celeb photos you don't want to miss this week!