You might think of Jeff Goldblum — whose latest show, "The World According to Jeff Goldblum," starts streaming on Disney+ on Nov. 12, 2019 — as one of Hollywood's funniest actors. But did you know that he's also one of the most interesting stars in the biz? Before you tune into his latest project, a collaboration with National Geographic in which he explores the origins of everything from tattoos to ice cream to sneakers, you might want to catch up on everything you don't know about him — but totally should! Let's get started…

RELATED: Things you might not know (but should!) about Sam Claflin

1. All he ever wanted to be was an actor, and he hid it for many years

Jeff Goldblum grew up in an Orthodox Jewish community in Pittsburgh. In an interview with BBC Radio 5 Live's Nihal Arthanayake on the "Headliners" podcast, he revealed that his dad once toyed with the idea of becoming an actor but decided to pursue medicine instead. When Jeff was 10, he decided he wanted to become an actor, but he kept his desire a secret from everyone — including his family. "During those years, I would take a shower," he told The Guardian, "and it had a door, not a curtain — a door, a glass door — which would steam up, and I'd write every morning — because I hadn't told anyone, even my parents or friends, that I wanted to act. It was embarrassing or something, and I knew it was too important to me to have it be anything but a secret. But the door would steam up, I didn't dare keep a diary or anything, and I'd write 'Please, God, let me be an actor,' and then, before I left the shower, I would wipe it off."

RELATED: Things you might not know (but should!) about Kate Beckinsale

2. His only other job was as a pen salesman

While it's hard to imagine Jeff Goldblum doing anything other than entertaining, he did a (very!) brief stint in sales. "I worked one week selling pens and pencils over the phone — that was the only other job," he told The Guardian. How did that go? "Horrible. My heart wasn't in it, and then I got sick, which probably wasn't unrelated."

RELATED: Things you might not know (but should!) about Trevor Noah

3. His first credited role was a character called "Freak #1"

Jeff Goldblum landed his first acting role in 1974's "Death Wish" starring Charles Bronson. In it, he played a New York City criminal who terrorizes the family of Charles's character, Paul Kersey. "I stick out like a sore thumb," he told the Huffington Post of the character, who was dubbed "Freak #1" (right). In 1983, Jeff told New York Magazine that it was the first movie he'd ever auditioned for — and he was thrilled to get it.

4. He has a star on the Hollywood Walk of Fame

Jeff Goldblum was honored with the 2,638th star on the Hollywood Walk of Fame on June 14, 2018. While accepting the honor — which came days before the release of "Jurassic World: Fallen Kingdom," the third film in the franchise in which Jeff plays mathematician Ian Malcolm — he shared this funny anecdote: "I was in the airport the other day, and a woman was looking at me… she walked up to me sort of in a trance, and she said, 'May I ask you a question?' And I said, 'Yes, of course you can.' She said, 'Are you Howie Mandel?' A bitter pill, but a very good lesson."

5. Many think he deserved an Oscar for his performance in "The Fly"

One of Jeff Goldblum's most critically acclaimed performances was in the 1986 horror/sci-fi movie "The Fly." Critic Gene Siskel maintained that the actor got "stiffed" by the Academy of Motion Picture Arts and Sciences "because he was in a horror film and not a film with an obvious social conscience, the kind the Academy traditionally honors."

6. He's been playing the piano since he was a child

Jeff Goldblum took piano lessons as a child. Though acting was always his passion, at the age of 14, he started playing gigs at cocktail bars. "At 10 years old, I had already decided to myself that I was going to be an actor," he told Rolling Stone. "I wanted that in the worst way but this piano thing, I just purely got a kick out of it. Over the years, I kept involved with music just for the sheer bushy-tailed fun of it." Throughout his career, he's played clubs with his musician friends, including Paul Weller, and even had a residency at Rockwell in Los Angeles with his band, the Mildred Snitzer Orchestra.

7. He released a chart-topping jazz album

Jeff Goldblum first met jazz legend Gregory Porter at an airport. "I waltzed up him and said, 'Mr. Gregory Porter, I'm Jeff Goldblum, I love you to bits,'" he revealed on a BBC podcast. A year or two later, the actor got to play the piano for the jazz star when the two were both guests on "The Graham Norton Show." Apparently, he impressed executives from the musician's label so much that he ended up landing a record deal. Jeff released his debut album, "The Capitol Studios Sessions," in late 2018 and it shot to No. 1 on the Billboard Jazz Albums chart.

Jeff Goldblum played a mathematician in 1993's "Jurassic Park" (seen here) and some of its sequels and over the years has become more and more interested in science. "Now that I've had a couple of kids… I'm more focused on science. Because I've played these parts here and there, I've done my due diligent research so I've come to know and esteem a little bit about the scientific way," he told the BBC. "I think there's so much from what we know and what we really know about the beginnings of the universe and the human mechanism that can be not only eye-opening but poetical and inspirational and transformational."

Jeff Goldblum admits his career has always consumed him, which is why it likely took so long for his personal life to pan out. He's twice divorced — from Patricia Gaul and Geena Davis — and at one time, he was engaged to Laura Dern.

10. His third wife is much younger than him

Jeff Goldblum married third wife Emilie Livingston in 2014. The Canadian dancer, aerialist and contortionist is 31 years younger than him. In a 2018 Instagram post, Emilie gushed about the actor and their romance and revealed that they went to a therapist before they got married to help them come to the conclusion that a wedding was what they wanted.

"You have to be in love with the idea to do it, and I guess I never was," Jeff Goldblum said in 2010 of why he never had any kids despite two previous marriages and countless other romances. All of that changed when he met his current wife and became a first-time dad at 62. "I'm glad I waited," he admitted to iNews. "It feels great to do it right now, because all the things I'm considering are perfectly suited to the big questions and challenges of having kids, and what you want to expose them to." He and Emilie are parents to sons Charlie (born in 2015) and River (born in 2017).

Jeff Goldblum was the victim of an online death hoax in 2009 — something even his own mother fell for. "It was a nasty rumor, which of course brings us to the mill of information-spreading that is not based on facts," he told iNews. "That can be alarming and poisonous, and we should be very vigilant about rejecting it."

NPR has reported that the average male actor stands around 5-foot-9 1/2 inches tall — which is about half an inch shorter than the average white American man. Jeff Goldblum, however, towers over most of his peers: He's 6-foot-4.

14. He's the co-founder of an acting school

Jeff Goldblum co-founded Los Angeles's Playhouse West — an acting studio based on the principles of his late acting coach, Sanford Meisner — in 1981 along with actor Robert Carnegie. Jim Carrey and Ashley Judd have studied there.

He gets a kick out of his celebrity, especially what it inspires. "I like to look at #jeffgoldblum on Instagram, which my wife makes fun of," he told GQ. "And then I take pictures of the things that interest me. There are many paintings and pictures of me, some nice and some very primitive and bad. People get tattoos of my face," he continued, whipping out his phone and showing the reporter some of the art including him "in a banana split, where I'm the center of a dessert. People made a balloon out of me … [here's] me in 'Earth Girls Are Easy.' This is a stupid shot of me on a pool table. Here's the painting Wes Anderson gave me after [we made] '[The] Life Aquatic [With Steve ZIssou]' that he commissioned. You see why my wife says, 'Cut it out.'" 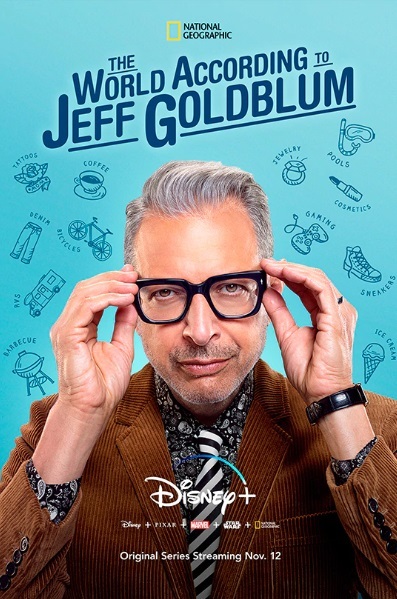 Up Next Getting to know him