Kate Beckinsale has been a fixture on Hollywood's A-list for years. In celebration of the release of her latest film, "The Widow," on March 1, 2019, Wonderwall.com has uncovered 15 juicy things about the British beauty that you might not know (but should!). Keep reading to learn some fun facts about Kate…

RELATED: 19 things you didn't know about the Oscars

Kate Beckinsale and her ex-partner, Michael Sheen, couldn't be closer. The pair, who dated from 1995 to 2003, are good friends and amicably co-parented their daughter, Lily, who's now in college. "He's really dear, close family. He's somebody I've known since I was 21 years old. I really love him a lot," Kate said on "Popcorn With Peter Travers" in 2016.

RELATED: Trevor Noah: Things you need to know about the host of "The Daily Show"

Kate Beckinsale won the WH Smith Young Writers Award not once but twice. She won her first (as a teen) for fictional short stories and her second for a series of poems she penned, according to BBC News.

She's getting cozy with Pete Davidson

Kate Beckinsale and Pete Davidson started getting hot and heavy in early 2019. The "Saturday Night Live" comedian reportedly "only has eyes" for Kate, who's 20 years his junior, and she's said to be equally smitten. The pair were photographed holding hands in February 2019 after one of Pete's stand-up shows following a flirting session at a 2019 Golden Globes afterparty. A few weeks later, Kate shot back at haters who criticized her budding relationship. After someone wrote "disappointed in your dating choices" in her Instagram comments, Kate replied, "Fairly let down by your wonky beard but thought rude to say." She's been linked to other much younger comedians too, including fellow Brit Jack Whitehall (who's 15 years her junior) in 2018 and Matt Rife (who's 22 years her junior) in 2017.

She experienced trauma at a very young age

Kate Beckinsale went through a very traumatic event when she was only 5 years old. Her father, actor Richard Beckinsale, died unexpectedly from a heart attack in 1979. The shocking experience deeply affected Kate, who "started expecting bad things to happen," according to an interview with The Independent.

That's right, Kate Beckinsale has been in the biz for more than four decades! The actress, who was born in 1973, landed her first televised role on the BBC's "This is Your Life" when she was only 4. The episode was dedicated to her late father.

She suffered from anorexia as a teen

Kate Beckinsale, still grieving from the loss of her father, became anorexic as a teen. She said she simply stopped eating at age 15 and if she had "been older when I had a breakdown I think I would have been an alcoholic," she told The Independent in 1997. "Anorexia is a breakdown," she explained. "It's very prevalent in teenagers because in those years there is the most amazing renaissance of your whole self. Anything that's lurking comes and bites you in the neck… The worst thing about it is that it takes on a life of its own separate from whatever's caused it. So you're stuck with the symptoms, or mentality, of it even when you have cracked what caused it." Kate underwent Freudian psychoanalysis for four years to treat her eating disorder.

Kate Beckinsale can do many things, but driving is not one of them. The "Underworld" franchise star cannot drive and has no interest in learning. "It's become embarrassing; it used to be a cute thing that I hadn't gotten around to doing it, but now it's become quite weird… Uber does love me," she told KCTV5 in 2016.

She never worked out until she was cast in "Pearl Harbor"

Kate Beckinsale never worked out until she landed the role of Lieutenant Evelyn Johnson McCawley in 2001's "Pearl Harbor." "To me, you only went to the gym if you were really weird and obsessive. No one I knew in London at the time ever did it," she told Women's Health in 2012.

Kate Beckinsale is much smarter than most people. The mother of one read French and Russian literature as a college student at Oxford, majored in modern languages and studied abroad in Paris during her junior year. After returning from France, however, Kate left school to focus on acting. "It was getting to the point where I wasn't enjoying either thing enough because both were very high pressure," she revealed during an interview with The Independent. (She speaks Russian, French, German and, of course, English.)

She's all about career versatility

Kate Beckinsale was primarily known for her serious, dramatic roles when she accepted the part of Selene in 2003's "Underworld." Since then, she's become known for her action roles in films like "Van Helsing," "Whiteout," "Contraband" and "Total Recall." Her versatility is one of the things she loves most about her career. "I thought, 'I'm not a proper actor if I don't do a play.' So I went off and did 'The Seagull,'" she told The Hollywood Reporter. "I hadn't done a movie in a foreign language, so I did a film in French. It'd be nice to have more strings to play, so I'll have a go at doing an action movie, which wasn't ever in the cards for me, sensibility-wise. All of this was very much a deliberate thing. One of the things that's been important has been to not be too massively attached to whatever your persona is at any given time. Life is long and, hopefully, as an actor, life is long."

She met her former hubby on the set of "Underworld"

"Underworld" not only made Kate Beckinsale into an action star — it also brought her love. The British actress met her future husband, Len Wiseman, on the set of the 2003 film. The director and his leading lady instantly connected, leading to a 12-year marriage. Sadly, they called it quits in 2016.

She was a late bloomer

It's hard to imagine that Kate Beckinsale was ever unpopular with the boys, but the actress has described herself as a "late bloomer." "All of my friends were kissing boys and drinking cider way before me. I found it really depressing that we weren't making campfires and everyone was doing grown-up stuff," she once told The Independent.

She gained 20 pounds for her role in "The Aviator"

Kate Beckinsale fully immersed herself into the role of Ava Gardner in 2004's "The Aviator." So much so that she gained 20 pounds to portray the real-life Hollywood starlet — by loading up on chocolate. "It was quite fun," she told CBS News. "It was a shame to lose it, really."

Kate Beckinsale was once meat-free. The brunette actress was a vegetarian for years before incorporating meat into her diet while filming "Pearl Harbor." "I was a vegetarian for a really long time because I am incredibly squeamish about meat," she told Shape in 2016. "But when I was filming 'Pearl Harbor,' I didn't have enough energy, and the trainer I was working with at the time said, 'You've got to start eating chicken and fish.' So I did, and that helped me. [My daughter] Lily and I eat clean — we have a lot of sautéed vegetables like brussels sprouts and broccoli and chicken and fish. Also, I don't drink alcohol. I feel [its effects] very quickly, so I've never actually had an entire glass of anything alcoholic."

She has a great sense of humor

Kate Beckinsale knows how to crack a joke. The actress often pens hilarious captions on her Instagram posts and frequently responds to fans' questions in a light-hearted way. When asked by one Instagram user what her "secret to eternal youth" was, Kate replied, "karaoke." 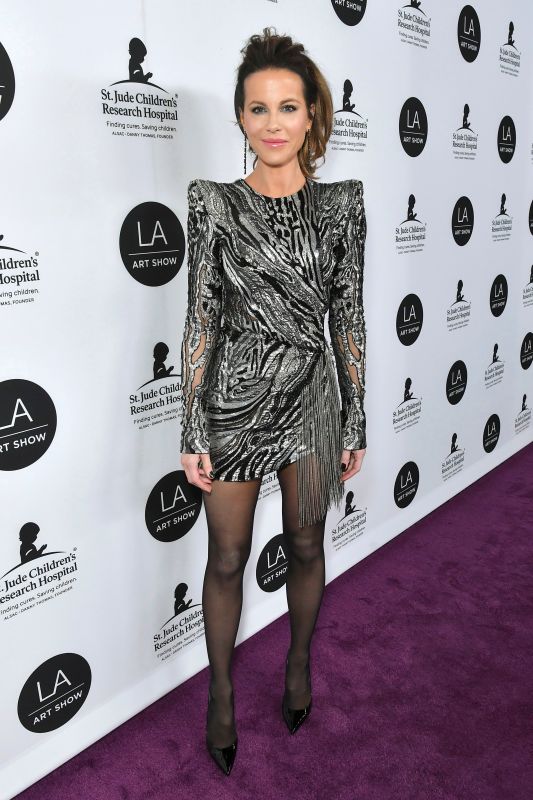