Believe it or not, it's been more than 25 years since "ER" debuted on the small screen. The hit NBC series — which premiered on Sept. 19, 1994, and is the second longest running medical drama in Hollywood history after "Grey's Anatomy" — centers around the professional and personal lives of the staff at the fictional County General Hospital in Chicago. In honor of star Noah Wyle's 50th birthday on June 4, 2021, Wonderwall.com is taking a look back at the handsome actor and his equally comely co-stars to see how they've changed over the years.

Noah Wyle, who earned five Emmy nominations for his work on "ER," continued racking up TV credits after the medical drama wrapped. He starred on "Falling Skies" and "The Librarians" and then headlined the 2019 limited series "The Red Line." Up next, he's set to star on IMDb TV's "Leverage: Redemption," which debuts in July 2021. Noah welcomed two children, son Owen and daughter Auden, with his first wife, Tracy Warbin, before the couple divorced in 2010. He married Sara Wells in 2014 and welcomed his second daughter, Frances, a year later.

George Clooney, who earned two Emmy nominations for his work on "ER," is now an A-list international movie star, director and producer. He's won three Golden Globes and two Academy Awards (one for producing "Argo") and has appeared in several beloved movies since "ER" came to an end in 2009 including "Up in the Air," "The Descendents" and "Gravity." In 2019, he made his big return to television on Hulu's adaptation of "Catch-22," which he also executive produced. More recently, he directed and starred in the 2020 Netflix sci-fi drama "The Midnight Sky." In 2021, he directed Ben Affleck in the upcoming drama "The Tender Bar," and he can next be seen on the big screen opposite "Ocean's Eleven" franchise co-star Julia Roberts in the rom-com "Ticket to Paradise," which is due in 2022. George dated a bevy of beauties post-"ER" (including British model Lisa Snowdon, actress Krista Allen, cocktail waitress Sarah Larson, Italian actress Elisabetta Canalis and former professional wrestler Stacy Keibler) before finding lasting love with British human rights lawyer Amal Alamuddin. They tied the knot in September 2014 and welcomed twins Ella and Alexander in June 2017.

Laura Innes, who scored two Emmy nominations for her work on "ER," went on to star on two short-lived NBC series: "The Event" and "Awake." She then had a four-episode stint on "Colony" and, more recently, an eight-episode stint on "How to Get Away with Murder" between 2018 and 2020. Laura shares two children, Mia and Cal, with her longtime husband, David Brisbin.

After "ER" came to an end, Eriq La Salle — who earned three Emmy nominations for his work on the hit NBC medical drama — had brief stints on "24," "How to Make It in America," "A Gifted Man," "Blackout" and "Under the Dome." He hasn't appeared on screen since 2017's "Logan," in which he had a small but incredibly important role as a farmer who helps the titular mutant during a moment of need. In recent years, Eriq has found a second calling as a television director, helming episodes of everything from 2021's "Law & Order: Organized Crime" and "Chicago P.D." to "Once Upon a Time" and "Lucifer." Impressively, the actor-director has managed to keep his personal life totally under wraps over the years.

Julianna Margulies starred as head nurse Carol Hathaway on "ER" from 1994 to 2000.

"ER" was just the beginning for Julianna Margulies, who took home one Emmy and scored five more Emmy nominations for her work on the hit NBC medical drama. In 2009 — the same year "ER" came to an end — she made her debut on "The Good Wife," for which she won two more Emmys. After that series concluded, she headlined the short-lived AMC series "Dietland," starred on the Nat Geo event series "The Hot Zone" and had a three-episode stint on "Billions." In May 2021, she released her buzzy memoir "Sunshine Girl: An Unexpected Life," and later in 2021, she's set to appear on the lauded Apple TV+ series "The Morning Show." Julianna married attorney Keith Lieberthal in 2007 and gave birth to a son the following year.

In the years since "ER" came to an end, Sherry Stringfield — who scored three Emmy nominations for her work on the hit NBC medical drama — has appeared in a handful of made-for-TV movies, starred on the second season of "Under the Dome" and appeared on four episodes of "Criminal Minds: Beyond Borders." Sherry welcomed two children, daughter Phoebe and son Milo, with journalist Larry E. Joseph before their marriage came to an end in 2006.

Anthony Edwards, who earned four Emmy nominations for his work on "ER," finally won an Emmy in 2010 for executive producing the made-for-TV movie "Temple Grandin." Other post-"ER" career highlights include voicing Echo in "Planes," headlining the short-lived ABC series "Zero Hour" and starring as Judge Stanley Weisberg on 2017's "Law & Order True Crime: The Menendez Murders." More recently, he starred on the third season of "Designated Survivor" in 2019. Anthony shares four children — one son and three daughters — with ex-wife Jeanine Lobell, whom he divorced in 2015 following more than two decades of marriage. He and longtime friend and colleague Mare Winningham have been an item since at least 2018.

After "ER" came to an end, Ming-Na Wen starred on "Stargate Universe" and had a seven-episode stint on the cult series "Eureka." She then starred as Melinda May on ABC's "Agents of S.H.I.E.L.D." from 2013 to 2020. The actress — who served as the voice of Mulan in the 1998 Disney cartoon — also popped up in "Push" and "The Darkness," had a three-episode stint on "Fresh Off the Boat," voiced characters on "Phineas and Ferb," the "Guardians of the Galaxy" series and "Sofia the First" and had a brief cameo in the 2020 live-action "Mulan." More recently, she portrayed Fennec Shand on "The Mandalorian." (She's set to return to the role on the upcoming "Star Wars" series "The Book of Boba Fett.") She shares two children — daughter Michaela and son Cooper — with her husband of 25 years, Eric Michael Zee.

Goran Visnjic went on to star in "Beginners" and "The Girl with the Dragon Tattoo." He also starred on "Red Widow," "Extant" and "Timeless" and had brief but memorable stints on "Leverage," "Santa Clarita Diet," "Dollface" and, more recently, "The Boys." Goran shares three children with his wife of more than two decades, Eva Vrdoljak. He also has a daughter from a 2006 extramarital affair.

After "ER" — for which Maura Tierney earned an Emmy nomination in 2001 — the actress had stints on "Rescue Me" and "The Good Wife." She then starred on "The Affair" from 2014 to 2019 and scored another Emmy nomination and a Golden Globe win for her efforts. She also popped up in the lauded films "Beautiful Boy" and "The Report" and, more recently, starred on the 2021 Showtime event series "Your Honor." In 2006, Maura divorced husband Billy Morrissette, whom she married in 1993. In 2009, she battled breast cancer that forced her to drop out of the "Parenthood" TV series. (Her role ultimately went to Lauren Graham.)

After "ER," Parminder Nagra starred on the short-lived series "Alcatraz" and had stints on "Psych," "The Blacklist," "Agents of S.H.I.E.L.D.," "Fortitude," "Elementary," "God Friended Me" and "13 Reasons Why." She also starred in the recent films "Bird Box" and "Five Feet Apart." Parminder married photographer James Stenson in January 2009 and welcomed a son, Kai, four months later. The couple called it quits in 2012.

After "ER," Mekhi Phifer had stints on "Lie to Me," "Torchwood," "White Collar," "House of Lies," "Frequency" and, more recently, "Truth Be Told" and "Love, Victor." He also starred as Max in the "Divergent" film franchise and portrayed Bobby Brown's brother, Tommy Brown, on BET's biographical miniseries "The Bobby Brown Story." Mekhi shares one son with actress Malinda Williams and a second son with former girlfriend Oni Souratha. He married longtime girlfriend Reshelet Barnes in 2013.

After "ER," John Stamos had stints on "Glee," "The New Normal," "Necessary Roughness" and the first season of "You." He also returned to the role of Uncle Jesse on "Fuller House" from 2016 to 2020, appeared in "My Big Fat Greek Wedding 2," headlined the short-lived sitcom "Grandfathered," starred on the second season of "Scream Queens" and portrayed Chef Louis in "The Little Mermaid Live!" On top of all that, he's starred in several Broadway productions over the years. Currently, he can be seen on the Disney+ sports dramedy "Big Shot." John split from model Rebecca Romijn in 2004 following six years of marriage. In February 2018, he married second wife Caitlin McHugh. They welcomed son Billy just two months later.

After "ER," Angela Bassett starred in the films "Jumping the Broom," "Green Lantern," "This Means War," "Olympus Has Fallen" and sequel "London Has Fallen," "Black Panther" and "Mission: Impossible – Fallout." In 2013, she made her big return to television on "American Horror Story" and scored two Emmy nominations for her efforts. Since 2017, she's added four more Emmy nominations to her résumé for guest starring on "Master of None" and "A Black Lady Sketch Show" and for narrating "The Flood" and "The Imagineering Story." She also worked as a voice actress on "BoJack Horseman" and in "Bumblebee" and "Soul." But that's not all… The extremely in-demand actress has starred on "9-1-1" as Athena Grant since 2018, and she's set to star in a trio of upcoming blockbusters: "Mission: Impossible 7," "Black Panther: Wakanda Forever" and the female assassin action flick "Gunpowder Milkshake," which is due in July 2021. Angela shares twins — son Slater and daughter Bronwyn — with her husband of more than two decades, actor Courtney B. Vance.

After "ER," Shane West starred on "Nikita" from 2010 to 2013 and on "Salem" from 2014 to 2017. The actor-musician — who's played with several bands and released a handful of albums over the years — also had a four-episode stint as iconic Batman villain Bane on "Gotham" in 2019. Since his "ER" days, he's been linked to a number of beauties. Most notably, he dated Evan Rachel Wood in 2009.

Linda Cardellini starred as nurse Samantha Taggart on "ER" from 2003 to 2009.

After "ER" wrapped, Linda Cardellini had stints on "New Girl" and "Mad Men" — for which she scored her first Emmy nomination in 2013. She then portrayed Hawkeye's wife in "Avengers: Age of Ultron" and "Avengers: Endgame," starred in "Daddy's Home" and its sequel and appeared in "The Founder," "A Simple Favor," "Green Book," "The Curse of la Llorona" and, more recently, 2020's "Capone." She also starred on "Bloodline" from 2015 to 2017 and appeared on the first season of the 2020 Disney+ series "Muppets Now." Since 2019, she's starred on "Dead to Me," which will enter its third and final season on Netflix in late 2021 or early 2022. (So far, she's earned two Emmy nominations for her work on the dark comedy.) In 2012, Linda welcomed a daughter with Steven Rodriguez. They got engaged the following year but have yet to tie the knot. 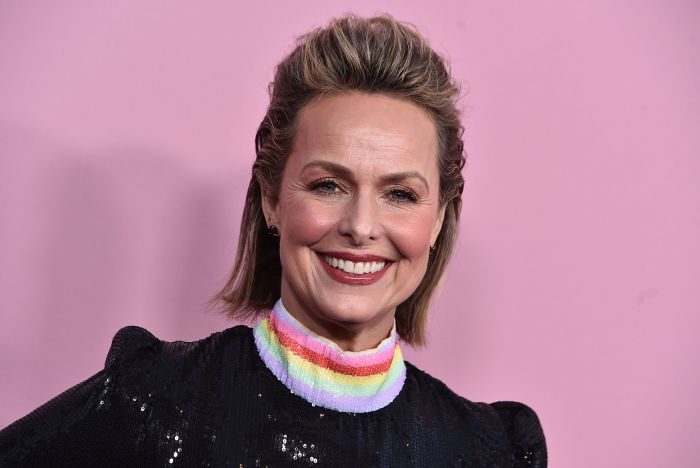