Technology advances every day, but we've been fascinated with robots for decades. In honor of the new season of "BattleBots" — which airs on Discovery on Thursday nights at 8 p.m. — Wonderwall.com rounded up our 20 favorite robots in pop culture, starting with the this season's Leanne Cushing and Team Valkyrie (pictured). Now keep reading for more… ("BattleBots" is produced by Whalerock Industries, which also produces Wonderwall.com.)

Alicia Vikander scored a Golden Globe nomination for her unnerving performance as the seductive Ava, an android with artificial intelligence who's plotting to escape from her creator, in the creepy 2015 sci-fi thriller "Ex Machina."

Over the years, R2-D2 and protocol droid C-3PO have joined Anakin Skywalker, Luke Skywalker, Princess Leia and Obi-Wan Kenobi on various adventures throughout the Galactic Empire as part of the "Star Wars" series. The duo — who are portrayed by Kenny Baker and Anthony Daniels, respectively — have appeared in all eight Skywalker Saga films, including 2015's "Star Wars: The Force Awakens" and 2017's "Star Wars: The Last Jedi." Speaking of "The Force Awakens"…

If you don't think BB-8 is the best thing that's happened to a galaxy far, far away since Princess Leia's slave bikini, you haven't watched the same version of "Star Wars: The Force Awakens" as the rest of us. The adorable droid brought the LOLs to Episode VII as resistance pilot Poe Dameron's sidekick that later teams up with Rey and Finn on their quest to deliver a map with Luke Skywalker's location to the Resistance and appeared in the final two episodes as well.

Arnold Schwarzenegger certainly kept the promise he made when he uttered the famous line "I'll be back" in "The Terminator" in 1984. The actor-politician — who portrayed the original T-800, a metal cyborg covered in living tissue — has played various iterations of the titular robot over the years, including in 2015's "Terminator Genisys."

Optimus Prime, the leader of the Autobots in the "Transformers" franchise, has strong morals, leadership and decision-making skills and believes in peaceful co-existence with humans. He's also a toy. What's not to like?

There's never been a more vice-riddled — or hilarious — robot than Bender of "Futurama." The cigar-and-booze-loving human-hating bending unit was voiced by John DiMaggio from 1999 to 2003 and 2008 and 2013.

In 2015's "Avengers: Age of Ultron," the homicidal artificial intelligence Ultron creates a synthetic body to serve as his primary vessel. The Avengers steal the synthetic body and upload J.A.R.V.I.S. — Tony Stark's artificially intelligent user interface computer system — into it. With the help of one of the six Infinity Stones, the synthetic body is activated and becomes the ridiculously awesome-looking Vision (Paul Bettany). Confused? So was everyone else who saw "Age of Ultron." But doesn't Vision look cool?

Daryl Hannah scored her big break in 1982 when she portrayed "basic pleasure model" replicant Pris in "Blade Runner." With her iconic blond bob, porcelain skin and smudged eye shadow, Pris cartwheeled her way into our hearts while attempting to avoid being "retired" by Harrison Ford's Rick Deckard.

We didn't need a lot of dialogue to fall in love with the titular waste-collecting robot in "WALL-E." In the 2008 animated film, WALL-E cleaned up the trash-covered Earth, fell in love with another robot named EVE, embarked on an epic space journey, and saved the fate of mankind. And he did it all while looking ridiculously adorable!

Tiffany Brissette starred as Vicki (a Voice Input Child Identicant) in the 1980s science-fiction sitcom "Small Wonder." Robotics engineer Ted Lawson created the robot, which he modeled after a human child, and then passed her off as a member of his family.

If you were alive in 1997 when "Austin Powers: International Man of Mystery" debuted, you undoubtedly remember the blond, negligee-clad Fembots, whose heads started exploding when they suffered "cross-mojulation" with the titular British spy. Oh, behave? No way!

As far as artificial Intelligence goes, it doesn't get much scarier than HAL 9000, the homicidal chess-playing computer system aboard the Discovery One in the 1968 science-fiction epic "2001: A Space Odyssey." If the words "hello, Dave" don't give you chills, you're probably a robot.

Diehard fans of the "Alien" franchise may not have been thrilled with the 2012 unofficial prequel "Prometheus," but if there was any bright spot in this dark and deadly universe, it was Michael Fassbender's David, an arrogant android who accompanies the human crew of the Prometheus on a mission to explore an ancient alien planet.

If you grew up during or after the '60s, you grew up with "The Jetsons" — and with the futuristic family's robotic housekeeper, Rosie.

Jude Law portrayed a male prostitute Mecha named Gigolo Joe in Steven Spielberg's 2001 sci-fi drama "A.I. Artificial Intelligence." The film — in which Haley Joel Osment stars as David, a child Mecha with the ability to love — is seriously depressing (for real, try watching the scene where David pleads for his life before he's destroyed at a "Flesh Fair" without shedding at least a few tears), but Jude is irresistible as the suave robot with Fred Astaire dance moves.

In the 1986 science fiction film "Short Circuit," an experimental military robot named Number 5 embarks on a journey after being struck by lightning and gaining sentience.

"It's alive!" The Robot Chicken, the star of the opening title sequence of the eponymous Adult Swim animated sketch-comedy series, was reanimated with robotic parts, including a laser eye, by a mad scientist and then forced to watch television. Not too bad for former roadkill, eh? 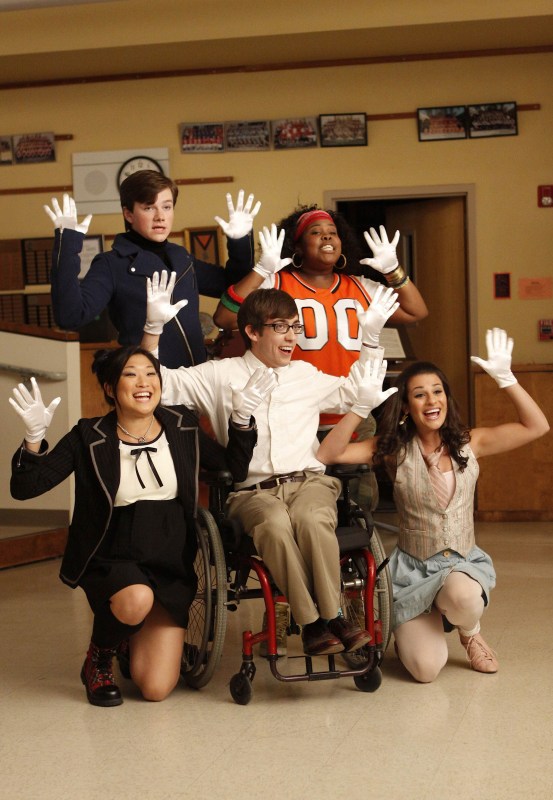 Up Next 'Glee' Curse?